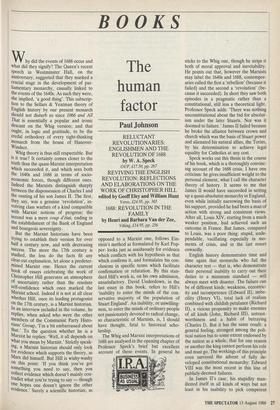 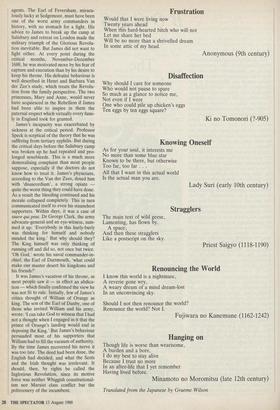 RELUCTANT REVOLUTIONARIES: ENGLISHMEN AND THE REVOLUTION OF 1688 by W. A. Speck

REVIVING THE ENGLISH REVOLUTION: REFLECTIONS AND ELABORATIONS ON THE WORK OF CHRISTOPHER HILL edited by Geoff Eley and William Hunt

1688: REVOLUTION IN THE FAMILY by Henri and Barbara Van der Zee,

Why did the events of 1688 occur and what did they signify? The Queen's recent speech in Westminster Hall, on the anniversary, suggested that they marked a crucial stage in the development of par- liamentary monarchy, causally linked to the events of the 1640s. As such they were, she implied, 'a good thing'. This subscrip- tion to the Sellars & Yeatman theory of English history by our present monarch should not disturb us since 1066 and All That is essentially a popular and ironic descant on the Whig version; and that ought, in logic and gratitude, to be the credal orthodoxy of every right-thinking monarch from the house of Hanover- Windsor.

Whig theory is thus still respectable. But is it true? It certainly comes closer to the truth than the quasi-Marxist interpretation which succeeded it, and which sees both the 1640s and 1688 in terms of socio- economic forces, though different ones. Indeed the Marxists distinguish sharply between the dispossession of Charles I and the ousting of his son James II. The first, they say, was a genuine 'revolution', in- volving class warfare of a kind compatible with Marxist notions of progress; the second was a mere coup d'etat, ending in the establishment of the Bank of England and bourgeois sovereignty. But the Marxist historians have been trying to establish their version for over half a century now, and with decreasing success. The more the 17th century is studied, the less do the facts fit any clear-cut explanation, let alone a predeter- mined Marxist one. Hence the current book of essays celebrating the work of Christopher Hill generates an atmosphere of uncertainty rather than the resolute self-confidence which once marked the Marxist school. Indeed it is not at all clear whether Hill, once its leading protagonist on the 17th century, is a Marxist historian. In an interview included in the volume, he replies, when asked who were the other members of the Communist Party Histo- rians' Group, I'm a bit embarrassed about that.' To the question whether he is a Marxist he replies: 'Well, it all depends on What you mean by Marxist.' Strictly speak- ing, a Marxist historian should only look for evidence which supports the theory, as Marx did himself. But Hill is wishy-washy on this point: `If you think you've got something you need to say, then you collect evidence which doesn't mainly con- tradict what you're trying to say — though one hopes one doesn't ignore the other evidence.' Surely a scientific historian, as opposed to a Marxist one, follows Ein- stein's method as formulated by Karl Pop- per: looks just as assiduously for evidence which conflicts with his hypothesis as that which confirms it, and formulates his con- clusions in specific terms which facilitate confirmation or refutation. By this stan- dard Hill's work is, on his own admission, unsatisfactory. David Underdown, in the last essay in this book, refers to Hill's `inability to enter the minds of the con- servative majority of the population of Stuart England'. An inability, or unwilling- ness, to enter the minds of ordinary people not passionately devoted to radical change, so characteristic of Marxists, is, I should have thought, fatal to historical scho- larship. The Whig and Marxist interpretations of 1688 are analysed in the opening chapter of Professor Speck's brief but excellent account of these events. In general he sticks to the Whig one, though he strips it both of moral approval and inevitability. He points out that, however the Marxists may label the 1640s and 1688, contempor- aries called the first a 'rebellion' (because it failed) and the second a 'revolution' (be- cause it succeeded). In short they saw both episodes in a pragmatic rather than a constitutional, still less a theoretical light. Professor Speck adds: 'There was nothing unconstitutional about the bid for absolut- ism under the later Stuarts. Nor was it doomed to failure.' James II failed because he broke the alliance between crown and church which was the basis of Stuart power and alienated his natural allies, the Tories, by his determination to achieve legal equality for Catholics at any cost.

Speck works out this thesis in the course of his book, which is a thoroughly convinc- ing account of the 1688 crisis. I have one criticism: he gives insufficient weight to the personal element, what I call the character theory of history. It seems to me that James II would have succeeded in setting up a quasi-absolutist monarchy in England, even while initially narrowing the basis of his support, provided he had been a man of action with strong and consistent views. After all, Louis XIV, starting from a much weaker position, had achieved such an outcome in France. But James, compared to Louis, was a poor thing: stupid, unde- pendable, vacillating especially in mo- ments of crisis, and in the last resort cowardly.

English history demonstrates time and time again that monarchs who fail the character test — that is, who demonstrate their personal inability to carry out their duties to a minimum standard — will always meet with disaster. The failure can be of different kinds: weakness, eccentric- ity and incompetence (Edward II), imbe- cility (Henry VI), total lack of realism combined with childish petulance (Richard II), a vicious propensity to make enemies of all kinds (John, Richard III), untrust- worthiness and a habit of betraying (Charles I). But it has the same result: a general feeling, strongest among the poli- tical nation but to some extent endorsed by the nation as a whole, that for one reason or another the king cannot perform his role and must go. The workings of this principle even survived the advent of fully de- veloped constitutional monarchy: Edward VIII was the most recent in this line of publicly-deemed failures.

In James II's case, his stupidity man- ifested itself in all kinds of ways but not least in his inability to pick competent agents. The Earl of Feversham, miracu- lously lucky at Sedgemoor, must have been one of the worst army commanders in history, with no stomach for a fight. His advice to James to break up the camp at Salisbury and retreat on London made the military triumph of the Glorious Revolu- tion inevitable. But James did not want to fight either. At every point during the critical months, November-December 1688, he was motivated more by his fear of capture and execution than by his desire to keep his throne. His defeatist behaviour is well described in Henri and Barbara Van der Zee's study, which treats the Revolu- tion from the family perspective. The two princesses, Mary and Anne, would never have acquiesced in the Rebellion if James had been able to inspire in them the paternal respect which virtually every fami- ly in England took for granted.

James's incapacity was exacerbated by sickness at the critical period. Professor Speck is sceptical of the theory that he was suffering from tertiary syphilis. But during the critical days before the Salisbury camp was broken up he had repeated and pro- longed nosebleeds. This is a much more demoralising complaint than most people suppose, especially if the doctors do not know how to treat it. James's physicians, according to the Van der Zees, dosed him with `disascordium', a strong opiate quite the worst thing they could have done. As a result the bleeding continued and his morale collapsed completely. This in turn communicated itself to even his staunchest supporters. Within days, it was a case of sauve qui peut. Dr George Clark, the army advocate-general and an eye-witness, sum- med it up: 'Everybody in this hurly-burly was thinking for himself and nobody minded the king.' But why should they? The King himself was only thinking of running off and did so, not once but twice. `Oh God,' wrote his naval commander-in- chief, the Earl of Dartmouth, 'what could make our master desert his kingdoms and his friends?'

It was James's vacation of his throne, as most people saw it — in effect an abdica- tion — which finally confirmed the view he was not fit to rule. Initially, few of James's critics thought of William of Orange as king. The son of the Earl of Danby, one of those who invited William and his army, wrote: 'I can take God to witness that I had not a thought when I engaged in it that the prince of Orange's landing would end in deposing the King.' But James's behaviour persuaded most of his supporters that William had to fill the vacuum of authority. By the time James recovered his nerve it was too late. The deed had been done, the English had decided, and what the Scots and the Irish thought was irrelevant. It should, then, by rights be called the Inglorious Revolution, since its motive force was neither Whiggish constitutional- ism nor Marxist class conflict but the poltroonery of the incumbent.