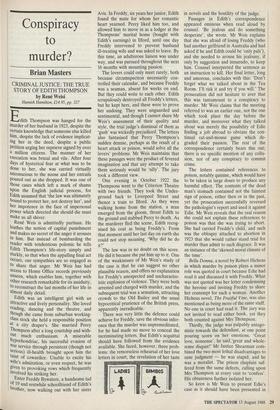 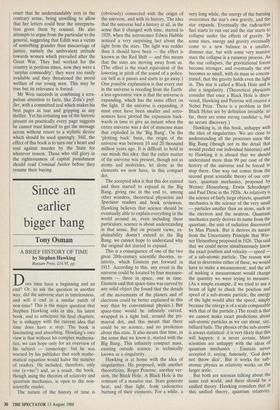 Edith Thompson was hanged for the murder of her husband in 1923, despite the certain knowledge that someone else killed him, despite the lack of evidence implicat- ing her in the deed, despite a public petition urging her reprieve signed by over a million citizens. The manner of her execution was brutal and vile. After four days of hysterical fear at what was to be done to her, she was carried virtually unconscious to the noose and her entrails Poured out as she dropped. It was one of those cases which left a mark of shame upon the English judicial process, for Edith assumed that 'the law was ultimately bound to protect her, not destroy her', and her impotence in the face of impersonal Power which directed she should die must make us all shiver.

Rene Weis is admittedly partisan. He loathes the notion of capital punishment and makes no secret of the anger it arouses in him. But instead of bombarding the reader with tendentious polemic he tells Edith Thompson's life-story simply and starkly, so that when the appalling final act Occurs, our sympathies are so engaged as to share that anger. Mr Weis has had access to Home Office records previously unseen, which enables him, together with other research remarkable for its assiduity, to reconstruct the last months of her life in almost daily detail. Edith was an intelligent girl with an attractive and lively personality. She loved reading, dancing and the theatre, and though she came from suburban working- class stock she held a responsible position at a city draper's. She married Percy Thompson after a long courtship and with- out much enthusiasm. A miserable hYPochondriac, his successful evasion of war service through persistent (though not serious) ill-health brought upon him the taint of cowardice. Unable to excite his Wye's admiration, or even respect, he was given to provoking rows which frequently involved his striking her. Enter Freddy Bywaters, a handsome lad of 19 and erstwhile schoolfriend of Edith's brother, now walking out with her sister Avis. In Freddy, six years her junior, Edith found the mate for whom her romantic heart yearned. Percy liked him too, and allowed him to move in as a lodger at the Thompsons' marital home (bought with Edith's earnings) in Ilford, until one day Freddy intervened to prevent husband ill-treating wife and was asked to leave. By this time, an adulterous liaison was under way, and was pursued throughout the next 16 months with mounting passion.

The lovers could only meet rarely, both because circumspection necessarily con- trolled their calendar, and because Freddy was a seaman, absent for weeks on end. But they could write to each other. Edith scrupulously destroyed all Freddy's letters, but he kept hers, and these were to prove her undoing. They were unguarded and sentimental, and though I cannot share Mr Weis's assessment of their quality and style, the trial judge's dismissal of them as `gush' was wickedly prejudiced. The letters also fantasised that Percy Thompson's sudden demise, perhaps as the result of a heart attack or poison, would solve all the lovers' problems. Mr Weis maintains that these passages were the product of fevered imagination and that any attempt to take them seriously would be 'silly'. The jury took a different view.

One evening in October 1922 the Thompsons went to the Criterion Theatre with two friends. They took the Under- ground back to Liverpool Street and thence a train to Ilford. As they were walking home from the station, a man emerged from the gloom, thrust Edith to the ground and stabbed Percy to death. As the murderer fled the scene, Edith recog- nised his coat as being Freddy's. From that moment until her last day on earth she could not stop moaning, 'Why did he do it?'

The law was in no doubt on this score. He did it because she put him up to it. One of the weaknesses of Mr Weis's study of the case is that he can suggest no other plausible reason, and offers no explanation for Freddy's unexpected and uncharacter- istic explosion of violence. They were both arrested and charged with murder, and the subsequent trial was a sensation, attracting crowds to the Old Bailey and the usual hypocritical prurience of the British press, apparently ineradicable. There was very little the defence could achieve for Freddy, save the obvious infer- ence that the murder was unpremeditated, for he had made no move to conceal the incriminating letters. But Edith's acquittal should have followed from the evidence available. She faced, however, three prob- lems: the remorseless rehearsal of her love letters in court, the revelation of her taste in novels and the hostility of the judge.

Passages in Edith's correspondence appeared ominous when read aloud by counsel. 'Be jealous and do something desperate', she wrote. Mr Weis explains that she was afraid of losing Freddy (who had another girlfriend in Australia and had asked if he and Edith could be 'only pals'), and she needed to arouse his jealousy, if only by suggestion and innuendo, to keep him. Counsel interpreted the sentence as an instruction to kill. Her final letter, long and amorous, concludes with this: 'Don't forget what we talked about in the Tea Room. I'll risk it and try if you will.' The prosecution did not hesitate to aver that this was tantamount to a conspiracy to murder. Mr Weis claims that the meeting referred to was an earlier one, not the one which took place the day before the murder, and moreover what they talked about was merely the possibility of Edie finding a job abroad to obviate the con- tinual cat-and-mouse game which de- graded their passion. The rest of the correspondence certainly bears this out; there is no specific mention of any collu- sion, nor of any conspiracy to commit crime.

The letters contained references to poison, notably quinine, which would have to be taken in large doses to produce any harmful effect. The contents of the dead man's stomach contained not the faintest sign of poison, either then or in the past, yet the prosecution successfully reversed the pathologist's report and used it against Edie. Mr Weis reveals that the real reason she could not explain these references to poison was that she was trying to abort. She had carried Freddy's child, and such was the obloquy attached to abortion in 1923 that she would rather stand trial for murder than admit to such disgrace. It was an instance of the 'skewed moral climate of the time'.

Bella Donna, a novel by Robert Hichens in which murder by poison plays a minor role was quoted in court because Edie had read it and discussed it with Freddy. What was not quoted was her letter condemning the heroine and inviting Freddy to share her contempt for such a woman. Another Hichens novel, The Fruitful Vine, was also mentioned as being more of the same stuff. No one in court had read it. The jury was not invited to read either book, yet they both counted against Mrs Thompson.

Thirdly, the judge was palpably antago- nistic towards the defendant, at one point pouring scorn on her emotions. 'Great love, nonsense', he said,`great and whole- some disgust!' Mr Justice Shearman com- bined the two most lethal disadvantages to sane judgment — he was stupid, and he was a moralist. The prison chaplain suf- fered from the same defects, calling upon Mrs Thompson at every visit to 'confess'. His obtuseness further isolated her.

So keen is Mr Weis to present Edie's case as it should have been presented in court that he understandably errs in the contrary sense, being unwilling to allow that her letters could bear the interpreta- tion given them by counsel. He also attempts to argue from the particular to the general, suggesting that Edith was a victim of something grander than miscarriage of justice, namely the ambivalent attitude towards women which prevailed after the Great War. They had worked for the country in perilous times, now they were a `surplus commodity'; they were too easily available and they threatened the moral welfare of our young men. This may be true but its relevance is forced.

Mr Weis succeeds in combining a scru- pulous attention to facts, like Zola's gref- fier, with a committed zeal which makes his best pages as taut and gripping as any thriller. Yet his irritating use of the historic present on practically every page suggests he cannot trust himself to get the message across without resort to a stylistic device which should be used sparingly. Still, the effect of this book is to turn one's heart and soul against murder by the State for whatever reason. Those who still glory in the righteousness of capital punishment should read Criminal Justice before they resume their baying.