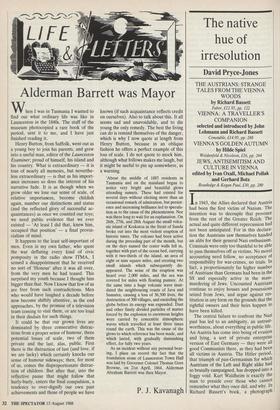 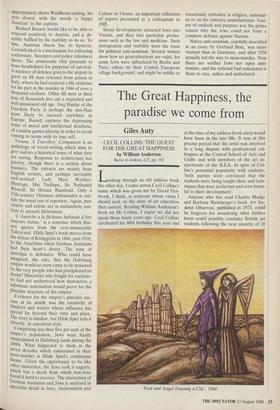 The native hue of irresolution

THE AUSTRIANS: STRANGE TALES FROM THE VIENNA WOODS by Richard Bassett

VIENNA: A TRAVELLER'S COMPANION selected and introduced by John Lehmann and Richard Bassett

In 1943, the Allies declared that Austria had been the first victim of Nazism. The intention was to decouple that province from the rest of the Greater Reich. The actual and quite different repercussion had not been anticipated. For in this declara- tion the Austrians saw themselves handed an alibi for their general Nazi enthusiasm. Criminals were only too thankful to be able to pass themselves off as victims. No moral accounting need follow, no acceptance of responsibility for war-crimes, no trials. In fact, a proportionately far higher number of Austrians than Germans had been in the SS and especially active in the mass- murdering of Jews. Uncounted Austrians continue to enjoy houses and possessions seized from Jews, and argue against res- titution in any form on the grounds that the rightful owners and their heirs happen to have been killed.

The central failure to confront the Nazi past has led to an ambiguity, an untrust- worthiness, about everything in public life. An Austria has come into being of evasion and lying, a sort of private enterprise version of East Germany — they were all good Communists there, as they had been all victims in Austria. The Hitler period, that triumph of pan-Germanism for which Austrians of the Left and Right alike had so brutally campaigned, has dropped into a foggy void. Kurt Waldheim is exactly the man to preside over those who cannot remember what they once did, and why. In Richard Bassett's book, a photograph appropriately shows Waldheim smiling, his eyes closed, with the words 'a happy Austrian' in the caption.

Richard Bassett would like to be able to respond positively to Austria, and is de- cently baffled by the inability to do so. To him, Austrian charm has its hysteria. Gemiitlichkeit is a mechanism for enforcing conformity. Snoopers and police informers thrive. The aristocratic elite pretends to bone-headedness for purposes of survival. A minister of defence goes to the airport to greet an SS man released from prison in Italy, where he had received a life sentence for his part in the murder in 1944 of over a thousand civilians. Other SS men in their tens of thousands live out a respected and well-pensioned old age. Jorg Haidar of the Freedom Party is perhaps the neo-Nazi most likely to succeed anywhere in Europe. Bassett captures the depressing sense of moral and intellectual deadness, of a nation games-playing in order to avoid coming to terms with its true self.

Vienna: A Travellers' Companion is an anthology of travel-writing which aims to give visitors a historical sense of what they are seeing. Response to architecture has Priority, though there is a section about manners. The extracts are mainly from English writers, and perhaps inevitably well-worked: Lady Mary Wortley- Montagu, Mrs Trollope, Sir Nathaniel Wraxall, Sir Horace Rumbold. Only a 17th-century Ottoman ambassador is out- side the usual run of reporters. Again, past vitality and colour are in melancholy con- trast to present lifelessness.

`L'Autriche a la facheuse habitude d'etre toujours battue,' is a sentence which Bas- sett quotes from the ever-memorable Talleyrand. Hilde Spiel's book moves from the defeat of Koniggratz in 1866, past 1918, to the Anschluss when German Austrians had their heart's desire. The tone of nostalgia is defensive. Who could have imagined, she asks, that the Habsburg empire would so soon come to be mourned by the very people who had precipitated its doom? Minorities who fought for exclusiv- ity had not understood how destructive a substitute nationalism would prove for the pluralist structure of the empire. Evidence for the empire's pluralist suc- cess at its zenith was the creativity of thinkers and writers whose influence has spread far beyond their time and place. The story is familiar, but Hilde Spiel tells it cleverly, in anecdotal style. Comprising less than five per cent of the empire's population, Jews were finally emancipated in Habsburg lands during the 1860s. What happened to them in the seven decades which culminated in their mass-murder is Hilde Spiel's continuous theme. Given the opportunity to be like other minorities, the Jews took it eagerly, which was a shock from which non-Jews found it hard to recover. The interaction of German Austrians and Jews is analysed in specialist detail in Jews, Antisemitism and Culture in Vienna, an important collection of papers presented at a colloquium in 1985.

Social developments attracted Jews into Vienna, and then into particular profes- sions such as the law and medicine. Such immigration and visibility were the basis for political anti-semitism. Several writers show how no generalisations are valid, for some Jews were influenced by Berlin and Paris, others by their Central European village background, and might be mildly or tenaciously orthodox in religion, national- ist or on the contrary assimilationist. Vari- ety of outlook and purpose was the prime reason why the Jews could not form a common defence against Nazism.

Native anti-semitism, carefully described in an essay by Gerhard Botz, was more virulent than in Germany, and after 1938 actually led the way to mass-murder. Now there are neither Jews nor open anti- semites, and the national bad conscience is there to stay, sullen and undeclared.