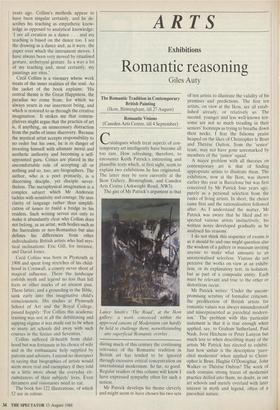 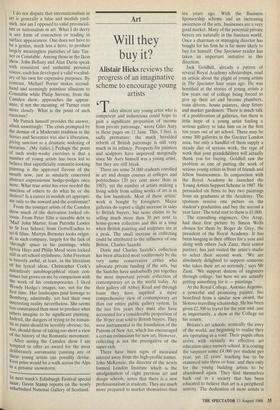 Catalogues which treat aspects of con- temporary art intelligently have become all too rare. How refreshing, therefore, to encounter Keith Patrick's interesting and plausible texts which, at first sight, seem to explain two exhibitions he has originated. The latter may be seen currently at the Ikon Gallery, Birmingham, and Camden Arts Centre (Arkwright Road, NW3).

The gist of Mr Patrick's argument is that Lance Smith's 'The Road', at the Ikon gallery: a work conceived within the approved canons of Modernism can hardly be held to challenge them, notwithstanding any superficial Romantic overlay . . .

during much of this century the continuing relevance of the Romantic tradition in British art has tended to be ignored through excessive critical concentration on international modernism. So far, so good. Regular readers of this column will know I have expressed sympathy often for such a notion.

Mr Patrick develops his theme cleverly and might seem to have chosen his two sets of ten artists to illustrate the validity of his premises and predictions. The first ten artists, on view at the Ikon, are all estab- lished already, or relatively so. The second, younger and less well-known ten- some are not so much treading in their seniors' footsteps as trying to breathe down their necks. I fear the fulsome praise heaped on the likes of Christopher le Brun and 'Therese Oulton, from the 'senior' team, may not have gone unremarked by members of the 'junior' squad.

A major problem with all theories on contemporary art is that of finding appropriate artists to illustrate them. The exhibition, now at the Ikon, was shown earlier this year in Barcelona but was first conceived by Mr Patrick four years ago, purely as a personal selection from the ranks of living artists. In short, the choice came first and the rationalisation followed after. As I understand the matter, Mr Patrick was aware that he liked and re- spected various artists instinctively; his written notes developed gradually as he analysed his reasons.

I do not think this sequence of events is as it should be and one might question also the wisdom of a gallery or museum inviting anyone to make what amounts to an unrationalised selection. Visitors do not perceive the works on view at an exhibi- tion, or its explanatory text, in isolation, but as part of a composite entity. Each must be relevant and true to the other or distortions occur.

Mr Patrick writes: 'Under the uncom- promising scrutiny of formalist criticism, the predilection of British artists for romantic values was always misunderstood and misrepresented as parochial modern- ism.' The problem with this particular statement is that it is true enough when applied, say, to Graham Sutherland, Paul Nash, Ivon Hitchens or Peter Lanyon but much less so when describing many of the artists Mr Patrick has elected to exhibit. Just how unfair is the description 'paro- chial modernist' when applied to Christ- opher le Brun, Hughie O'Donoghue, John Walker or Therese Oulton? The work of each contains strong traces of modernist practice drilled into them, no doubt, in our art schools and merely overlaid with later interest in myth and legend, often of a parochial nature.

I do not dispute that internationalism in art is generally a false and modish yard- stick, nor am I opposed to valid provincial- ism or nationalism in art. What I do decry is any form of concoction or trading in surface appearances. One does not have to be a genius, much less a hero, to produce largely meaningless pastiches of late Tur- ner or Constable. Among those in the Ikon show, John Bellany and Alan Davie speak with consistent and authentic personal voices; each has developed a valid vocabul- ary of his own for expressive purposes. By contrast, Michael Porter makes second- hand and seemingly pointless allusions to Constable while Philip Stevens, from the Camden show, approaches the appear- ance, if not the meaning, of Turner even more closely. What is the point of such exercises?

Mr Patrick himself provides the answer, albeit unwittingly: 'The crisis prompted by the demise of a Modernist tradition in the Sixties and Seventies was also a liberation, giving sanction to a dramatic widening of horizons.' (My italics.) Perhaps the point of such wishy-washy exercises is that a

believe of young artists has been led to believe that superficially romantic-looking painting is the approved flavour of the month now, just as similarly conceived abstract expressionist hodge-podges once were. What true artist has ever needed the sanction of others to do what he or she desires? Is a career in modish art appropri- ate only to the coward and the conformist?

From the younger artists of the Camden show much of the derivation looked ob- vious. From Peter Ellis a sizeable debt to `Mad' John Martin; from Putrisha Lawlor to St Ives School; from Gotto/Eachus to sci-fi films. Martyn Brewster looks origin- al, in such company, largely for the lack of 'through' space in his paintings, while Sylvia Hays and Philip Mead seem locked still in art school stylishness. John Freeman is bravely awful, at least, in the literalism of his lyrical ideas. Christopher Cook's relentlessly autobiographical strain con- tinues but grows on me by comparison with the work of his contemporaries. I liked Wendy Hodge's images, too, not for the first time. Her landscapes paid homage to Bomberg, admittedly, yet had their own interesting reality nevertheless. She seems less constrained than most to produce what others imagine to be significant painting. Indeed, the dangers of trying to be roman- tic in paint should be horribly obvious. So, too, should those of taking too short a view of the history of the Romantic movement. After seeing the Camden show I am tempted to offer an award for the most deliberately unromantic painting any of these young artists can possibly devise. First prize would be a walk across the Alps in a genuine snowstorm.