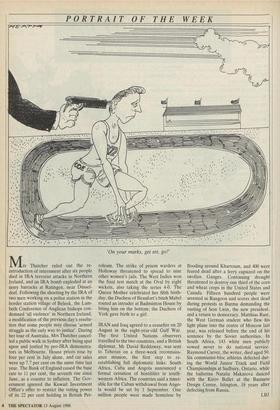 Mrs Thatcher ruled out the re- introduction of internment after six people died in IRA terrorist attacks in Northern Ireland, and an IRA bomb exploded at an army barracks at Ratingen, near Diissel- dorf. Following the shooting by the IRA of two men working on a police station in the border station village of Beleek, the Lam- beth Conference of Anglican bishops con- demned 'all violence' in Northern Ireland, a modification of the previous day's resolu- tion that some people may choose 'armed struggle as the only way to justice'. During her tour of Australia, Mrs Thatcher cancel- led a public walk in Sydney after being spat upon and jostled by pro-IRA demonstra- tors in Melbourne. House prices rose by four per cent in July alone, and car sales were up 7.7 per cent on the same time last year. The Bank of England raised the base rate to 11 per cent, the seventh rise since June, as a counter to inflation. The Gov- ernment ignored the Kuwait Investment Office's offer to restrict the voting power of its 22 per cent holding in British Pet- roleum. The strike of prison warders at Holloway threatened to spread to nine other women's jails. The West Indies won the final test match at the Oval by eight wickets, also taking the series 4-0. The Queen Mother celebrated her 88th birth- day; the Duchess of Beaufort's bitch Mabel routed an intruder at Badminton House by biting him on the bottom; the Duchess of York gave birth to a girl.

IRAN and Iraq agreed to a ceasefire on 20 August in the eight-year-old Gulf War. The first United Nations observers travelled to the two countries, and a British diplomat, Mr David Reddaway, was sent to Teheran on a three-week reconnaiss- ance mission, the first step to re- establishing full diplomatic links. South Africa, Cuba and Angola announced a formal cessation of hostilities in south- western Africa. The countries said a timet- able for the Cuban withdrawal from Ango- la would be set by 1 September. One million people were made homeless by flooding around Khartoum, and 400 were feared dead after a ferry capsized on the swollen Ganges. Continuing drought threatened to destroy one third of the corn and wheat crops in the United States and Canada. Fifteen hundred people were arrested iri Rangoon and scores shot dead during protests in Burma demanding the ousting of Sein Lwin, the new president, and a return to democracy.. Matthias Rust, the West German student who flew his light plane into the centre of Moscow laSt year, was released before the end of his sentence by the Soviet authorities. In South Africa, 143 white men publicly vowed never to do national service. Raymond Carver, the writer, died aged 50. Six communist-bloc athletes defected dur- ing the World Junior Track and Field Championships at Sudbury, Ontario, while the ballerina Natalia Makarova danced with the Kirov Ballet at the Business Design Centre, Islington, 18 years after defecting from Russia.