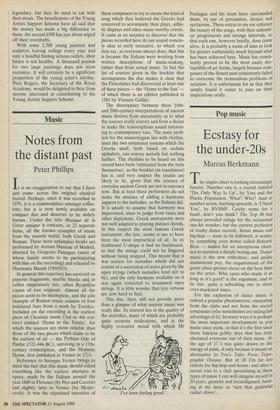 Notes from the distant past

It is no exaggeration to say that I have just come across the original classical record. Perhaps, since it was recorded in 1979, it is a commonplace amongst collec- tors; but it is now newly available on compact disc and deserves to be Widely known. Under the title Musique de la Grece antique it contains, in 22 separate items, all the known examples of music from the ancient world, both Greek and Roman. These most unfamiliar freaks are performed by Atrium Musicae of Madrid, directed by Gregorio Paniagua (most of whose family seems to be participating with him on the recording) and released by Harmonia Mundi (1901015).

In general this repertory has survived on papyrus fragments, marble blocks and in rather suspiciously late, often Byzanrine copies of lost originals. Almost all the pieces seem to be incomplete, and the sole example of Roman music consists of four Mutilated bars from a work by Terence. Included on the recording is the earliest piece of Christian music (3rd or 4th cen- tury) entitled 'Hymn to the Trinity', for which the sources are more reliable than those of the two pieces which claim to be the earliest of all — the Pythian Ode of Pindar (522-446 BC), surviving in a 17th- century transcription, and the Homeric Hymn, first published in Venice in 1724.

Reference to baroque Venice brings to mind the fact that this music should sound something like the earliest attempts at opera, made by the Italians around the year 1600 in Florence (by Peri and Caccini) and slightly later in Venice (by Monte- verdi). It was the stipulated intention of these composers to try to create the kind of song which they believed the Greeks had conceived to accompany their plays, athle- tic displays and other music-worthy events. It came as no surprise to discover that the pieces recorded here do not sound remote- ly akin to early recitative, to which you may say, as everyone always does, that this is because the Italians were working from written descriptions of music-making, rather than from actual music. In fact the list of sources given in the booklet that accompanies the disc makes it clear that the Florentines had discovered at least one of these pieces — the 'Hymn to the Sun' of which there is an edition published in 1581 by Vicenzo Galilei.

The discrepancy between these 16th- and 20th-century interpretations of ancient music derives from uncertainty as to what the sources really convey and from a desire to make the transcriptions sound interest- ing to contemporary ears. The main prob- lem for the musicologists lies with rhythm, since the two notational systems which the Greeks used, both based on archaic alphabets, can convey melody but nothing further. The rhythms to be heard on this record have been 'extricated from the texts themselves', as the booklet (in translation) has it, and very suspect the results are likely to be, given that the stresses of everyday ancient Greek are not in currency now. But at least these performers do not make the mistake of adding a harmonic support to the melodies, as the Italians did. It is unsafe to assume that harmony was improvised, since to judge from vases and other depictions, Greek instruments were not well adapted to playing distinct chords. In this respect the most famous Greek instrument, the lyre, seems to me to have been the most impractical of all. In its traditional U-shape it had no backboard, so that the strings could not be fingered without being stopped. This meant that it was useless for melodies which did not consist of a succession of notes given by the open strings (which melodies tend not to be), and the only harmony available on it was again restricted to strummed open strings. It is little wonder that lyre virtuosi are now hard to find.

This disc, then, will not provide more than a glimpse' of what ancient music was really like. Its interest lies in the quality of the melodies, many of which are probably quite accurate realisations, and in the highly evocative mood with which Mr `I've been feeling good.' Paniagua and his team have surrounded them, by use of percussion, drones and recitations. These extras to my ear enhance the beauty of the songs, with their unfamil- iar progressions and strange intervals, so that each one, however briefly, does come alive. It is probably a waste of time to look for greater authenticity much beyond what has been achieved here. Music has consis- tently proved to be the most easily des- tructible of art forms, largely because com- posers of the distant past consistently failed to overcome the tremendous problems of notation. It is unfortunate for us that they simply found it easier to pass on their inspirations orally.