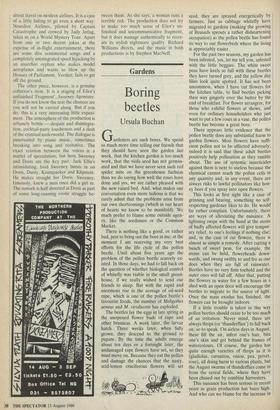 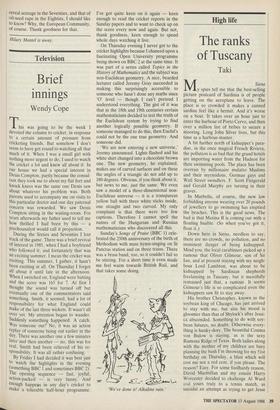 There is nothing like a good, or rather bad, pest to bring out the bore in me; at the moment I am reserving my very best efforts for the life cycle of the pollen beetle. Until about five years ago the problem of the pollen beetle scarcely ex- isted. In those days, we had to fall back on the question of whether biological control of whitefly was viable in the small green- house, if we really wished to send our friends to sleep. But with the rapid and enormous rise in the acreage of oil-seed rape, which is one of the pollen beetle's favourite foods, the number of Meligethes aeneus and M. viridiscens has exploded.

The beetles lay the eggs in late spring in the unopened flower buds of rape and other brassicas. A week later, the larvae hatch. Three weeks later, when fully grown, they descend to the ground to pupate. By the time the adults emerge about ten days or a fortnight later, the undamaged rape flowers have set, so they must move on. Because they eat the pollen and damage the chances that the nasty, acid-lemon cruciferous flowers will set seed, they are sprayed energetically by farmers. Just as cabbage whitefly have migrated to gardens (making the growing of Brussels sprouts a rather disheartening occupation) so the pollen beetle has found its way to our flowerbeds where the living is appreciably easier.

For the past two seasons, my garden has been infested, yes, let me tell you, infested with the little beggars. The white sweet peas have keels so full with these beetles they have turned grey, and the yellow day lilies look quite spotted. It has not been uncommon, when I have 'cut flowers for the kitchen table, to find beetles picking their way gingerly over the butter by the end of breakfast. For flower arrangers, for those who exhibit flowers at shows, and even for ordinary householders who just want to put a few roses in a vase, the pollen beetle has become a great bore.

There appears little evidence that the pollen beetle does any substantial harm to garden flowers. Most flowers have suffi- cient pollen not to be affected adversely; indeed it is said that these adult beetles positively help pollination as they ramble about. The use of systemic insecticides against them is next to useless because the chemical cannot reach the pollen cells in any quantity and, in any event, there are always risks to lawful pollinators like hon- ey bees if you spray into open flowers. This looks at first sight like a case of grinning and bearing, something no self- respecting gardener likes to do. He would far rather complain. Unfortunately, there are ways of alleviating the nuisance. A lightning swipe with the hand at the stems of badly affected flowers will give tempor- ary relief, to one's feelings if nothing else; and, in the case of cut flowers, there is almost as simple a remedy. After cutting a bunch of sweet peas, for example, the stems can be held, flowerheads down- wards, and swung swiftly to and fro as one does when they are full of rainwater. Beetles have no very firm toehold and the outer ones will fall off. After that, putting the flowers in water for a few hours in a shed with an open door will encourage the beetles to migrate to the source of light. Once the mass exodus has finished, the flowers can be brought indoors.

If a little trouble is taken in this way pollen beetles should cease to be too much of an irritation. Never mind, there are always thrips (or `thunderflies) to fall back on, so to speak. On airless days in August, these fill the air, infest one's hair, bite one's skin and get behind the frames of watercolours. Of course, the garden has quite enough varieties of thrips as it is (gladiolus, carnation, onion, pea, privet, rose), all doing harm to various plants, but the August swarms of thunderflies come in from the cereal fields, where they have been chased out by combine harvesters.

This nuisance has been serious in recent years as grain production has been high. And who can we blame for the increase in cereal acreage in the Seventies, and that of oil-seed rape in the Eighties, I should like to know? Why, the European Community, of course. Thank goodness for that.

Hilary Mantel is away.