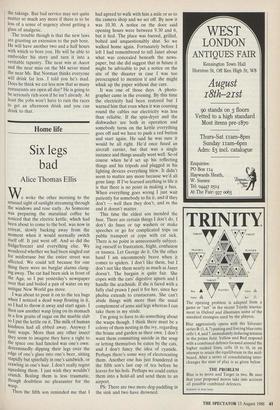 We woke the other morning to the unusual sight of sunlight streaming through the windows and rose early. As Someone was preparing the matutinal coffee he noticed that the electric kettle, which had been about to come to the boil, was now in retreat, slowly backing away from the moment when it would normally switch itself off. It just went off. And so did the fridge/freezer and everything else. We wondered whether we had been singled out for misfortune but the entire street was affected. We could tell because for one thing there were no burglar alarms clang- ing away. The cat had been sick in front of the Aga, so I put yesterday's newspaper over that and boiled a pan of water on my antique New World gas stove.

I was about to pour it on to the tea bags when I noticed a dead wasp floating in it, so I had to throw it away and start again. I then saw another wasp lying on its stomach in a few grains of sugar on the marble slab so I put the kettle on it. The milk of human kindness had all ebbed away. Anyway I hate wasps. More than any other insect they seem to imagine they have a right to the space one had fancied was one's own: determinedly dipping their legs over the edge of one's glass into one's beer, sitting stupidly but spitefully in one's sandwich, or crawling in one's hair. I don't really regret squashing them. I just wish they wouldn't crunch. Boiling them is less traumatic, though doubtless no pleasanter for the wasp.

Then the fifth son reminded me that I had agreed to walk with him a mile or so to the camera shop and we set off. By now it was 10.30. A notice on the door said opening hours were between 9.30 and 6, but it lied. The place was barred, grilled, bolted and unquestionably shut. So we walked home again. Fortunately before I left I had remembered to tell Janet about what was concealed beneath the news- paper, but she did suggest that in future it might be advisable to put a notice on the site of the disaster in case I was too preoccupied to mention it and she might whisk up the paper without due care.

It was one of those days. A photo- grapher came in the evening. By this time the electricity had been restored but I warned him that even when it was coursing round the cables our electricity was less than reliable. If the spin-dryer and the dishwasher are both in operation and somebody turns on the kettle everything goes off and we have to push a red button and start again. He said he was sure it would be all right. He'd once fused an aircraft carrier, but that was a single instance and things usually went well. So of course when he'd set up his reflecting things and his tripods and plugged in his lighting devices everything blew. It didn't seem to matter any more because we'd all gone limp. If I've learned anything in life it is that there is no point in making a fuss. When everything goes wrong I just wait patiently for somebody to fix it, and if they don't — well then they don't, and in the end it doesn't matter.

This time the eldest son mended the fuse. There are certain things I don't do. I don't do fuses or tap washers or make speeches or go for complicated trips on public transport or cope with cat sick. There is no point in unnecessarily subject- ing oneself to frustration, fright, confusion or nausea. Let George do it. On the other hand I am uncommonly brave when it comes to spiders. I don't like them, but I don't not like them nearly as much as Janet doesn't. The bargain is quite fair. She copes with the cats' digestive upsets and I handle the arachnids. If she is faced with a fully clad prawn I peel it for her, since her phobia extends to crustaceans. She can't abide things with more than the usual complement of arms and legs whereas I can take them in my stride.

I'm going to have to do something about the wasps though. I think there must be a colony of them nesting in the ivy, regarding the house and garden as their own. I don't want them committing suicide in the soup or letting themselves be eaten by the cats, and I don't fancy the idea of cyanide. Perhaps there's some way of electrocuting them. Another one has just foundered in the fifth son's last cup of tea before he leaves for his hols. Perhaps we could entice them into a hold-all and send them to an airport.

PS: There are two more dog-paddling in the sink and two have drowned.