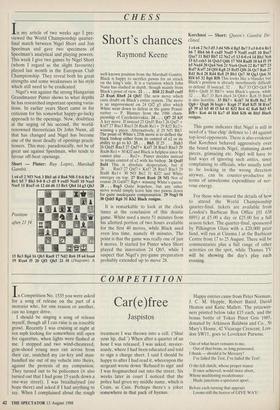 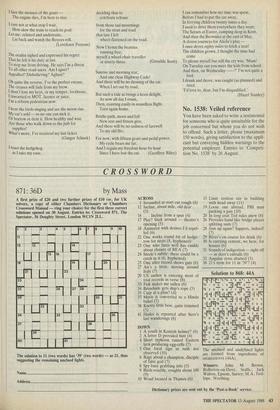 In Competition No. 1535 you were asked for a song of release on the part of a motorist who, for one reason or another, can no longer drive.

I should be singing a song of release myself, though all I can raise is an irascible growl. Recently I was cruising at night at ten mph looking for somewhere still open for cigarettes, when lights were flashed at me. I stopped and two wind-cheatered, gym-shoed young men ran across from their car, snatched my car-key and man- handled me out of my vehicle into theirs, against the protests of my companion. They turned out to be policemen (it also turned out that I had gone 15 yards down a one-way street). I was breathalysed (no hope there) and asked if I had anything to say. When I complained about the rough treatment I was thrown into a cell. (`Shut your lip, dad.') When after a quarter of an hour I was released, I was asked, myster- iously, where I had been educated and told to sign a charge sheet. I said I should be happy to after I had read it, whereupon the sergeant wrote down 'Refused to sign' and I was frogmarched out into the street. Six weeks later in court I noticed that the police had given my middle name, which is Crain, as Cain. Perhaps there's a joker somewhere in that pack of hyenas. Happy entries came from Peter Norman, J. C. M. Hepple, Robert Baird, David Heaton and Katie Mallett. The prizewin- ners printed below take £15 each, and the bonus bottle of Tokay Pinot Gris 1985, donated by Atkinson Baldwin and Co., St Mary's House, 42 Vicarage Crescent, Lon- don SW11, goes to Loveknot Parsons.

Out of what heart remains to me, Out of that brain, so long possessed, I thank — should it be Mercury?

O the fell clutch, whose proper stance If once achieved, would twice abort, Whose maddening recalcitrance Made junctions a spectator sport...

Before each turning that appears Looms still the horror of GIVE WAY: I face the menace of the gears The engine dies, I'm here to stay.

I care not at what stop I wait, How slow the train to reach its goal: Let me, relaxed and undistraite, Lie back and watch the Royces roll.

(Loveknot Parsons) The oculist sighed and expressed his regret That he felt it his duty at last To stop me from driving. He says I'm a threat To all other road-users. Am I upset? Appalled? Disbelieving? Aghast?

Oh quite the reverse. I've the perfect excuse, The creases will fade from my brow. I shan't lose my keys, or my temper; footloose, Unworried re MOT, licence or juice, I'm a reborn pedestrian now.

I hear the birds singing and see the moon rise. My car's sold — so no one can nick it, Or borrow or dent it. How healthy and wise Are those who walk down to the pub for supplies! What's more, I've received my last ticket.

(Ginger Jelinek) I toast the hedgehog as I take my ease, deciding thus to celebrate release from those sad mournings for the stoat and toad that late I left wheel-flattened on the road.

Now I hymn the beagles running free, myself a wheel-chair traveller at ninety-three. (Griselda Scott) Sunrise and morning star, And one clear Highway Code!

And there will be no droning of the car, When I set out by road, But such a ride as brings a keen delight, As now all day I roam, Then, coasting easily in soundless flight, Turn again home.

Bridle-path, moor and fell New zest and fitness give, And there will be no sadness of farewell To my old fliv; For now, with fifteen gears and pedal power, My cycle bears me far, And I regain my freedom hour by hour Since I have lost the car. (Geoffrey Riley) I can remember how my time was spent, Before I had to put the car away, In ferrying children twenty times a day.

I used to drive them everywhere they went;

The Scouts at Easter, camping deep in Kent, And then the Brownies at the end of May, A dozen journeys for Akela's play -

I once drove eighty miles to fetch a tent!

The children grown, I thought the time had come To please myself but still the cry was, 'Mum!

On Tuesday can you meet the kids from school And then, on Wednesday —?' I'm not quite a fool.

I drank and drove, was caught (as planned) and tried.