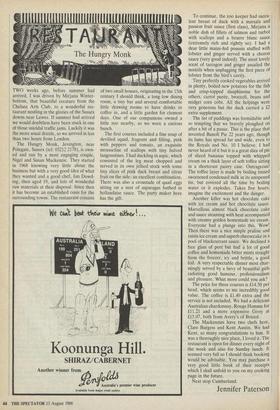 TWO weeks ago, before summer had arrived, I was driven

by Mirjana Winter- bottom, that beautiful creature from the Chelsea Arts Club, to a wonderful res- taurant nestling in the glories of the Sussex downs near Lewes. If summer had arrived we would doubtless have been stuck in one of those suicidal traffic jams. Luckily it was the more usual drizzle, so we arrived in less than two hours from London.

The Hungry Monk, Jevington, near Polegate, Sussex (tel: 03212 2178), is own- ed and run by a most engaging couple, Nigel and Susan Mackenzie. They started - in 1968 knowing very little about the business but with a very good idea of what they wanted and a good chef, Ian Dowd- ing, then aged 19, and lots of wonderful raw materials at their disposal. Since then it has become an established oasis for the surrounding towns. The restaurant consists

of two small houses, originating in the 15th century I should think, a long low dining room, a tiny bar and several comfortable little drawing rooms to have drinks or coffee in, and a little garden for clement days. One of our companions owned a little zoo nearby, so we were a curious bunch.

The first courses included a fine soup of devilled squid, fragrant and filling, pink with peppers and tomato, an exquisite mousseline of scallops with tiny halved langoustines. I had duckling in aspic, which consisted of the leg meat chopped and served in its own jellied stock with some tiny slices of pink duck breast and citrus fruit on the side: an excellent combination. There was also a croustade of quail eggs sitting on a nest of asparagus bathed in hollandaise sauce. The party maker here has the gift. To continue, the zoo, keeper had succu- lent breast of duck with a marsala and passion fruit sauce (first class), Mirjana a noble dish of fillets of salmon and turbot with scallops and a beurre blanc sauce (extremely rich and rightly so). I had a dear little maize-fed poussin stuffed with lobster and ginger served with a choron sauce (very good indeed). The most lovely scent of tarragon and gingek assailed the nostrils when unplugging the first piece of lobster from the bird's cavity.

Tiny perfectly cooked vegetables arrived in plenty, boiled new potatoes for the fish and crisp-topped dauphinoise for the others, carrot purée, broccoli, beans and midget corn cobs. All the helpings were very generous but the duck carried a £2 extra supplement. The list of puddings was formidable and so tempting that we bravely ploughed on after a bit of a pause. This is the place that invented Banofi Pie 22 years ago, though its fame has spread far and wide, even to the Royals and No. 10 I believe. I had never heard of it but it is a great slice of pie of sliced bananas topped with whipped cream on a thick layer of soft toffee sitting in a shortcrust pastry case. Outrageous! The toffee layer is made by boiling tinned sweetened condensed milk in its unopened tin, but covered all the time by boiling water or it explodes. Takes fiye hours; imagine the excitement and the danger.

Another killer was hot chocolate cake with ice cream and hot chocolate sauce. Marvellous almost black chocolate cake and sauce steaming with heat accompanied with creamy golden homemade ice cream. Everyone had a plunge into this. Wow! Then there was a nice simple praline and raisin ice cream and superb cheesecake in a pool of blackcurrant sauce. We declined a free glass of port but had a lot of good coffee and homemade bitter mints straight from the freezer, icy and brittle, a good foil. A very respectable dinner most char- mingly served by a bevy of beautiful girls radiating good humour, professionalism and pleasure. What more could you ask? The price for three courses is £14.50 pei head, which seems to me incredibly good value. The coffee is £1.40 extra and the service is not included. We had a delicious Australian chardonnay, Rouge Homme for £11.21 and a more expensive .Givry at £15.07, both from Avery's of Bristol.

The Mackenzies have two chefs here, Clare Burgess and Kent Austin. We had Kent, so many congratulations to him. It was a thoroughly nice place, I loved it. The restaurant is open for dinner every night of the week and also for Sunday lunch. It seemed very full so I should think booking would be advisable. You may purchase a very good little book of their receipts which I shall unfold to you on my cooking page in the future.