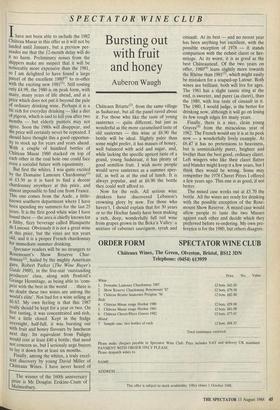 Bursting out with fruit and honey

Ihave not been able to include the 1982 Chateau Musar in this offer as it will not be landed until January, but a preview per- snades me that the 12-month delay will do it no harm. Preliminary noises from the shippers make me suspect that it will be noticeably more expensive than the 1981, so I am delighted to have found a large parcel of the excellent 1980(4) to re-offer with the exciting new 1981(5). Still costing only £4.99, the 1980 is do peak form, with many, many years of life ahead, and at a Price which does not ptit it beyond the pale of ordinary drinking wine. Perhaps it is a bit rich for everyday drinking — like a diet of pigeon, which is said to kill you after two months — but elderly punters may not agiee. Soon the 1980s will disappear, and the price will certainly never be repeated. I should have thought this a good opportun- ity to stock up for years and years ahead. With a couple of hundred bottles of Chateau Musar 1980 stacked on top of each other in the coal hole one could face even a socialist future with equanimity. But first the whites. I was quite excited by the, Domaine Lamoure Chardonnay(1) at £3.50 as it is hard to find a decent chardonnay anywhere at this price, and almost impossible to find one from France. This one comes from the Aude, a little- known southern department where I have been spending my summers for the last 25 Years. It is the firSt good white wine I have found there — the area is chiefly known for a filthy, fizzy beverage called Blanquette de Limoux. Obviously it is not a great wine at this price, but the vines are ten years old, and it is a pioper French chardonnay for immediate summer drinking.

Spectator readers will be no strangers to Rosemount's Show Reserve Char- donnay(2), hailed by the mighty Ametican guru, Robert Parker (The Wine Buyer's Guide 1988), in the five-star 'outstanding producers' class, along with Penfold's Grange Hermitage, as being able to 'com- pete with the best in the world . . . there is no doubt these two wines are among the world's elite'. Not bad for a wine selling at £6.63. My own feeling is that this 1987 really should be kept for a year or two. On first tasting, it was concentrated and rich,; but a little closed. Kept in the fridge overnight, half-full, it was bursting out With fruit and honey flavours by luncheon next day. Its equivalent from Puligny would cost at least £40 a bottle; that need not concern us, but I seriously urge buyers to lay it down for at least six months.

Finally, among the whites, a truly excel- lent discovery by young David Miller of Chateaux Wines. I have never heard of Chateaux Briatte(3), from the same village as Suduiraut; but all the panel raved about it. For those who like the taste of young sauternes — quite different, but just as wonderful as the more caramelised taste of old sauternes — this wine at £6.90 the bottle will be ideal. Slightly paler than some might prefer, it has masses of honey, well balanced with acid and sugar, and, while lacking the specific apricot taste of a grand, young Suduiraut, it has plenty of good semillon fruit. I wish more people would serve sauternes as a summer aper- itif, as well as at the end of lunch. It is always popular, and at £6.90 the bottle they could well afford to.

Now for the reds. All serious wine drinkers have discovered Lebanon's crowning glory, by now. For those who haven't, I should explain that for 30 years or so the Hochar family have been making a rich, deep, wonderfully full red, wine from grapes gown in the Beka'a Valley: a mixture of cabernet sauvignon, syrah and cinsault. At its best — and no recent, year has been anything but excellent, with the possible exception of 1978 it stands comparison with the richeit claret or her- mitage. At its worst, it is as good as the best Chateauneuf. Of the two years on offer, 1980(4) leans slightly more towards the Rhone than 1981(5), which might easily be mistaken for a souped-up Latour. Both wines are brilliant, both will live for ages. The 1981 has a slight tannic sting at the end, is sweeter, and purer (as claret), than the 1980, with less taste of cinsault in it. The 1980, I would judge, is the better for drinking now, although it will go on losing its few rough edges for many years.

,Finally, there is a nice, clean young Gravest from the miraculous year of 1982. The French would say it is at its peak now — a wondeifully lively example. At £6.47 it has no pretensions to heaviness, but is unmistakably purer, brighter and livelier than the best good, ordinary claret. Left wingers who like their claret flatter and blander might keep it a few years, but I think they would be wrong. Some may remember the 1978 Cheret Pitres I offered a few years ago. This one is as good, if not better.

The mixed case works out at £5.70 the bottle. All the wines are ready for drinking with the possible exception of the Rose- mount Show Reserve. A mixed case would allow people to taste the two Musars against each other and decide which they preferred before re-ordering. My own pre- ference is for the 1980, but others disagree.