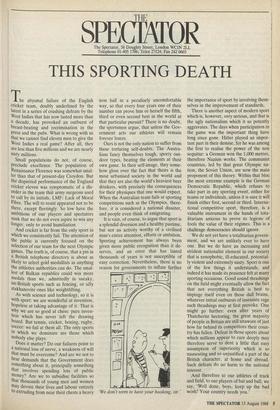 The abysmal failure of the English cricket team, doubly underlined by the latest in a series of crushing defeats by the West Indies that has now lasted more than a decade, has provoked an outburst of breast-beating and recrimination in the press and the pubs. What is wrong with us that we cannot find eleven men to give the West Indies a real game? After all, they are less than five millions and we are nearly sixty millions.

Small populations do not, of course, preclude excellence. The population of Renaissance Florence was somewhat smal- ler than that of present-day Croydon. But the dispirited performance of the England cricket eleven was symptomatic of a dis- order in the team that army surgeons used to call by its initials, LMF: Lack of Moral Fibre. The will to resist appeared not to be there, except fleetingly. So low have the ambitions of our players and spectators sunk that we do not even aspire to win any longer, only to avoid humiliation.

And cricket is far from the only sport in which we consistently fail. The attention of the public is currently focused on the selection of our team for the next Olympic games. The truth is, of course, that a pin in a British telephone directory is about as likely to select gold medallists as anything the athletics authorities can do. The smal- lest of Balkan republics could win more medals than we, admittedly in sneaky, un-British sports such as fencing, or silly stakhanovite ones like weightlifting. As with science and technology, so it is with sport: we are wonderful at invention, hopeless at taking advantage of it. That is why we are so good at chess: pure inven- tion which has never left the drawing board. But tennis, cricket, boxing, rugby, ortccer: we fail at them all. The only sports in which we dominate are those which nobody else plays.

Does it matter? Do our failures point to a.national loss of nerve, a weakness of will that must be overcome? And are we not to hear demands that the Government does something about it, principally something that involves spending lots of public money? Are we to subsidise facilities so that thousands of young men and women may devote their lives and labour entirely to extruding from near their chests a heavy

iron ball in a peculiarly uncomfortable way, so that every four years one of their number can prove him or herself the fifth, third or even second best in the world at that particular pursuit? There is no doubt, the sportsmen argue, that unless the Gov- ernment acts our athletes will remain forever losers.

Ours is not the only nation to suffer from these torturing self-doubts. The Austra- lians fancy themselves tough, sporty out- door types, beating the elements at their own game. In their self-image, they some- how gloss over the fact that theirs is the most urbanised society in the world and that they are also the world's heaviest beer drinkers, with precisely the consequences for their physiques that one would expect. When the Australian team fails at sporting competitions such as the Olympics, there- fore, it is considered a national disaster, and people even think of emigrating.

It is vain, of course, to argue that sport is a splendid diversion and a healthy pastime, but not an activity worthy of a civilised man's entire attention, efforts or ambition. Sporting achievement has always been given more public recognition than it de- serves, and an error that has lasted thousands of years is not susceptible of easy correction. Nevertheless, there is no reason for governments to inflate further `We don't seem to have your booking, sir.' the importance of sport by involving them- selves in the improvement of standards.

There is another aspect of modern sport which is, however, very serious, and that is the ugly nationalism which it so potently aggravates. The days when participation in the game was the important thing have long since gone. Hitler played an impor- tant part in their demise, fcir he was among the first to realise the power of the non sequitur: a German won the 1,000 metres, therefore Nazism works. The communist countries; led by that great Olympic na- tion, the Soviet Union, are now the main proponent of this theory. Within that bloc the most extreme example is the German Democratic Republic, which refuses to take part in any sporting event, either for teams or individuals, unless it is sure it will finish either first, second or third. Interna- tional competitive sport, therefore, is a valuable instrument in the hands of tota- litarians anxious to prove to legions of fools the value of their regimes. This is a challenge democracies should ignore.

We do not yet have a totalitarian govern- ment, and we are unlikely ever to have one. But we do have an increasing and strident nationalist element in our society that is xenophobic, ill-educated, potential- ly violent and extremely nasty. Sport is one of the few things it understands, and indeed it has made its presence felt at many sporting occasions. Good sound thrashings on the field might eventually allow the fact that not everything British is best to impinge itself even on those dull brains, whatever initial outbursts of insensate rage such thrashings may at first provoke. One might go further: even after years of Thatcherite hectoring, the great majority of people in Britain are still unaware of just how far behind its competitors their coun- try has fallen. Defeat in those sports about which millions appear to care deeply may therefore serve to dent a little that easy assumption of superiority which is so nauseating and so unjustified a part of the British character, at home and abroad. Such defeats do no harm to the national interest.

And therefore to our athletes of track and field, to our players of bat and ball, we say, 'Well done, boys, keep up the bad work! Your country needs you.'