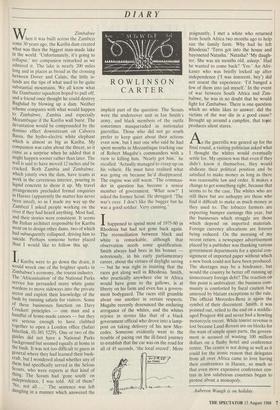 Zimbabwe henhen it was built across the Zambezi some 30 years ago, the Kariba dam created what was then the biggest man-made lake in the world. 'Unfortunately, it's going to collapse,' my companion remarked as we admired it. The lake is nearly 200 miles long and in places as broad as the crossing between Dover and Calais; the little is- lands are the tips of what used to be quite substantial mountains. We all know what the Dambuster squadron hoped to pull off, and a friend once thought he could destroy Baghdad by blowing up a dam. Neither scheme compares with what would happen to Zimbabwe, Zambia and especially Mozambique if the Kariba wall burst. The devastation would be compounded by the domino effect downstream on Caborra Bassa, the hydro-electric white elephant which is almost as big as Kariba. My companion was calm about the threat, so it came as a surprise when he added that it might happen sooner rather than later. The wall is said to have moved 12 inches and be cracked. Both Zambia and Zimbabwe, which jointly own the dam, have teams at work in the cavernous interior, pouring in liquid concrete to shore it up. My travel arrangements precluded formal enquiries in Harare (apparently the matter has never been aired), so as I made my way up the Zambezi I asked people working on the river if they had heard anything. Most had, and their stories were consistent. It seems the Italian architect responsible for Kariba went on to design other dams, two of which had subsequently collapsed, driving him to suicide. Perhaps someone better placed than I would like to follow this up.

If Kariba were to go down the drain, it would wreck one of the brighter sparks in Zimbabwe's economy, the tourist industry. The Africanisation' of the National Parks service has persuaded many white game wardens to move sideways into the private sector and exploit their knowledge of the bush by running safaris for visitors. Some of these businesses function on Davy Crockett principles — one man and a handful of home-made canoes — but they are serious enough to have clubbed together to open a London office (Safari Interlink, 01-381 5229). One or two of the guides did not have a National Parks background but seemed equally at home in the bush. It was not too difficult to guess in general where they had learned their bush- craft, but I wondered aloud whether any of them had specifically served in the Selous Scouts, who were experts at that kind of thing. The Scouts had 'gone south' on independence, I was told. All of them? `No, not all....' The sentence was left dangling in a manner which answered the ROWLINSON CARTER

implicit part of the question. The Scouts were the undercover unit in Ian Smith's army, and black members of the outfit sometimes masqueraded as nationalist guerrillas. Those who did not go south prefer to keep quiet about their actions even now, but I met one who said he had spent months in Mozambique tracking one of Robert Mugabe's commanders with a view to killing him. 'Nearly got him,' he recalled. 'Actually managed to creep up on his vehicle. He must have realised what was going on because he'd disappeared. The engine was still warm.' The comman- der in question has become a senior member of government. 'What now?' I asked the former Scout. He shrugged. 'The war's over. I don't like the bugger but he was a good soldier. Very cunning.'

Ihappened to spend most of 1975-80 in Rhodesia but had not gone back again. The reconciliation between black and white is remarkable, although that observation needs some qualification. Smith always had bees in his bonnet notoriously, in his early parliamentary career, about the virtues of daylight saving — but he was right in insisting that the races got along well in Rhodesia. Smith, who practically anywhere else in Africa would have gone to the gallows, is at liberty on his farm and even has a govern- ment bodyguard. The races still grumble about one another in certain respects. Mugabe recently denounced the enduring arrogance of the whites, and the whites rejoice in stories like that of a black government official who drove into a lamp- post on taking delivery of his new Mer- cedes. Someone evidently went to the trouble of pacing out the ill-fated journey to establish that the car was on the road for all of 45 seconds, 'the local record'. More

poignantly, I met a white who returned from South Africa two months ago to help run the family farm. Why had he left Rhodesia? `Terrs got into the house and bayoneted Natasha.' Natasha? 'My daugh- ter. She was six months old, asleep.' Had he wanted to come back? 'Yes.' An Afri- kaner who was briefly locked up after independence CI was innocent, hey') did not resent the experience: 'I'd banged a few of them into jail myself.' In the event of war between South Africa and Zim- babwe, he was in no doubt that he would fight for Zimbabwe. There is one question which no white likes to answer: did the victims of the war die in a good cause? Brought up around a campfire, that topic produces silent stares.

As the guerrilla war geared up for the final round, a visiting politician asked what I thought the whites would eventually settle for. My opinion was that even if they didn't know it themselves, they would abdicate their political position and be satisfied to make money as long as there was reasonable law and order. It makes a change to get something right, because that seems to be the case. The whites who are still there but are unhappy are those who find it difficult to make as much money as they used to. The tobacco farmers are expecting bumper earnings this year, but the businesses which struggle are those which depend on imported materials. Foreign currency allocations are forever being reduced. On the morning of my recent return, a newspaper advertisement placed by a publisher was thanking various government departments for a special con- signment of imported paper without which a new book could not have been produced. The shortages may be a hindrance, but would the country be better off running up unnecessary foreign debt? The reaction on this point is ambivalent: the business com- munity is comforted by fiscal caution but annoyed by blatant exceptions to the rule. The official Mercedes-Benz is again the symbol of their discontent. Smith, it was pointed out, relied to the end on a middle- aged Peugeot 404 and never had a howling motorcycle escort. While tourist revenue is lost because Land-Rovers are on blocks for the want of simple spare parts, the govern- ment is accused of wasting 100 million dollars on a flashy hotel and conference centre. The centre is not doing as well as it could for the ironic reason that delegates from all over Africa came to love having their conferences in Harare, so much so that even more expensive conference cen- tres in less salubrious countries began to protest about a monopoly.

Auberon Waugh is on holiday.