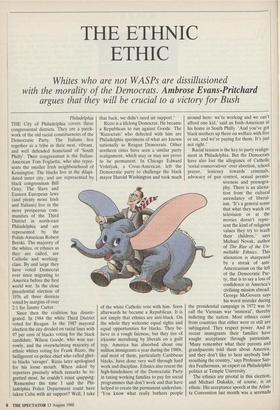 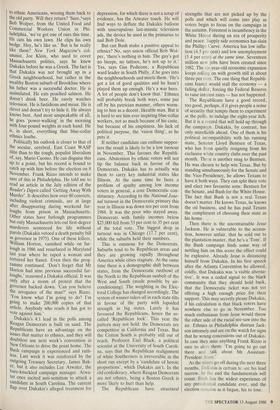 Whites who are not WASPs are dissillusioned

with the morality of the Democrats. Ambrose Evans-Pritchard

argues that they will be crucial to a victory for Bush

Since then the coalition has disinte- grated. In 1984 the white Third District voted for Reagan. In the 1987 mayoral election the city divided on racial lines with 97 per cent of blacks voting for the black candidate, Wilson Goode, who won nar- rowly, and the overwhelming majority of ethnic whites voting for Frank Rizzo, the belligerent ex-police chief who called ghet- to blacks 'savages'. Rizzo later apologised for his loose mouth. When asked by reporters precisely which remarks he re- gretted most, he couldn't resist quipping: `Remember the time I said the Phi- ladelphia Police Department could have taken Cuba with air support? Well, I take that back, we didn't need air support.'

Rizzo is a lifelong Democrat. He became a Republican to run against Goode. The `Rizzocrats' who defected with him are Philadelphia specimens of what are known nationally as Reagan Democrats. Other northern cities have seen a similar party realignment, which may or may not prove to be permanent. In Chicago Edward Vrdolyak, a Croat-American, left the Democratic party to challenge the black mayor Harold Washington and took much of the white Catholic vote with him. Soon afterwards he became a Republican. It is not simply that ethnics are anti-black. On the whole they welcome equal rights and equal opportunities for blacks. They be- lieve in a rough fairness, but they tire of irksome moralising by liberals on a guilt trip. America has absorbed about one million immigrants a year during the 1980s, and most of them, particularly Caribbean blacks, have done very well through hard work and discipline. Ethnics also resent the high-handedness of the Democratic Party in taxing working families to pay for social programmes that don't work and that have helped to create the permanent underclass. `You know what really bothers people around here: we're working and we can't afford one kid,' said an Irish-American at his home in South Philly. 'And you've got black mothers up there on welfare with five or six, and we're paying for them. It's just not right.'

The ethnics are pivotal in this election, and Michael Dukakis, of course, is an ethnic. His acceptance speech at the Atlan- ta Convention last month was a serenade

to ethnic Americans, wooing them back to the old party. Will they return? `Sure,‘says Bob Wolper, from the United Food and Commercial Workers Union in Phi- ladelphia, 'we've got one of ours this time. He cuts his own lawn. He clips his own hedge. Hey, he's like us.' But is he really like them? New York Magazine's col- umnist, Joe Klein, who used to cover Massachusetts politics, says he knew Dukakis before he was a Greek. The fact is that Dukakis was not brought up in a Greek neighbourhood, but rather in the wealthy Boston suburb of Brookline where his father was a successful doctor. He is assimilated. He eats poached salmon. He doesn't drink beer. He rarely watches television. He is fastidious and mean. He is clever and doesn't try to hide it. He always knows best. And most unspeakable of all, he goes 'power-walking' in the morning with four-pound weights in each hand. He is, in short, everything that blue-collar ethnics loathe.

Politically his outlook is closer to that of the secular, cerebral, East Coast WASP elite than to the tough, populist liberalism of, say, Mario Cuomo. He can disguise this op to a point, but his record is bound to catch up with him before the election on 8 November. Frank Rizzo intends to make sure of this in Philadelphia. He told me to read an article in the July edition of the Reader's Digest called 'Getting Away With Murder'. It describes how over 80 convicts, including violent criminals, are at large after disappearing during weekend fur- loughs from prison in Massachusetts. Other states have furlough programmes but only Massachusetts lets out first-degree murderers sentenced for life without Parole (Dukakis vetoed a death penalty bill as governor in 1975). One of these killers, William Horton, vanished while on fur- lough in 1986 and resurfaced in Maryland last year where he raped a woman and tortured her fiance. Even then the prog- ramme continued. 'Don't forget that Mr Horton had nine previous successful fur- loughs,' reasoned a Dukakis official. It was only after a storm of protest that the governor backed down. 'Can you believe the arrogance of the man?' says Rizzo. You know what I'm going to do? I'm going to make 200,000 copies of that article. Anybody who reads it has got to vote against him.'

Dukakis's 4:1 lead in the polls among Reagan Democrats is built on sand. The Republicans have an advantage on the issues that matter to ethnics, and they will doubtless use next week's convention in New Orleans to drive the point home. The Bush campaign is experienced and ruth- less. Last week it was reinforced by the outgoing Treasury Secretary, James Bak- er, but it also includes Lee Atwater, the bare-knuckled campaign manager. Atwa- ter once incited anti-semitism to attack a candidate in South Carolina. The current flap over Dukakis's alleged treatment for depression, for which there is not a scrap of evidence, has the Atwater touch. He will find ways to deflate the Dukakis balloon with unscrupulous last-minute television ads, the device he used in the primaries to nail Bob Dole.

But can Bush make a positive appeal to ethnics? No, says union official Bob Wol- per, 'there's nothing in him. The guy's got no biceps, no tattoos, he's not up to it.' Yes, says Gus Pedicone, a Republican ward leader in South Philly, if he goes into the neighbourhoods and meets them. 'He's got a lot of good qualities and he hasn't played them up enough. He's a war hero. A lot of people don't know that.' Ethnics will probably break both ways, some put off by his patrician manner, others warm- ing to him as a decent, likeable man. But it is hard to see him ever inspiring blue-collar workers, not so much because of his caste, but because of his emptiness, his lack of political purpose, the 'vision thing', as he puts it.

If neither candidate can enthuse suppor- ters the result is likely to be a low turnout in November. This favours the Republi- cans. Abstention by ethnic voters will not tip the balance back in favour of the Democrats. Dukakis has to actually win them to carry key industrial states like Illinois. At the same time he faces a problem of apathy among low income voters in general, a core Democratic con- stituency. According to the National Jour- nal turnout in the Democratic primary this year in Illinois was down ten per cent from 1984. It was the poor who stayed away. Democrats with family incomes below $25,000 fell from 53 per cent to 35 per cent of the total vote. The biggest drop in turnout was in Chicago (17.7 per cent), while the suburbs held their numbers.

This is ominous for the Democrats. Suburbs tend to be Republican areas and they are growing rapidly throughout America while cities stagnate. At the same time there is a demographic shift between states, from the Democratic rustbowl of the North to the Republican sunbelt of the West and South (made possible by air- conditioning). The weighting in the Elec- toral College has changed accordingly. The system of winner-takes-all in each state tilts in favour of the party with lopsided strength in big states. Lately it has favoured the Republicans, hence the so- called 'Republican lock'. This year the pattern may not hold: the Democrats are competitive in California and Texas. But the Cotton South is probably still out of reach. Professor Earl Black, a political scientist at the University of South Caroli- na, says that the Republican realignment of white Southerners is irreversible in the short run except by a 'candidate of heroic proportions', which Dukakis ain't. In the old confederacy, where Reagan Democrats are not ethnics, being a Boston Greek is more likely to hurt than help.

The Republicans have structural strengths that are not picked up by the polls and which will come into play as voters begin to focus on the campaign in the autumn. Foremost is incumbency in the White House during an era of prosperity and peace. Supply side economics has slain the Phillips Curve: America has low infla- tion (4.5 per cent) and low unemployment (5.4 per cent) at the same time. Seventeen million new jobs have been created since 1982. The six-year-old economic expansion keeps rolling on with growth still at about three per cent. The one thing that Republi- cans feared would stall the economy — a falling dollar, forcing the Federal Reserve to raise interest rates — has not happened.

The Republicans have a good record, too good, perhaps, if it gives people a sense of security that tempts them to experiment at the polls, to indulge the eight-year itch. But it is a record that will hold up through the campaign. Dukakis, by contrast, has only minefields ahead. One of them is his political incompatibility with his running mate, Senator Lloyd Bentsen of Texas, who has been quietly resigning from his exclusive white country clubs over the past month. There is another snag to Bentsen. He was chosen to help win Texas. But by standing simultaneously for the Senate and the Vice-Presidency, he allows Texans to have it both ways. They can split their vote and elect two favourite sons: Bentsen for the Senate, and Bush for the White House. The fact that Bush is not a real Texan doesn't matter. He knows Texas, he knows the oil business, and he has paid Texans the compliment of choosing their state as his home.

Then there is the uncontainable Jesse Jackson. He is vulnerable to the accusa- tion, however unfair, that he sold out to the plantation master, that he's a 'Tom'. If the Bush campaign finds some way of nettling him on this score the effect could be explosive. Already Jesse is distancing himself from Dukakis. In his first speech after the Atlanta Convention he allowed, coldly, that Dukakis was 'a viable alterna- tive'. It was a coded signal to the black community that they should hold back, that the Democratic ticket was not yet offering a high enough price for their support. This may secretly please Dukakis, if his calculation is that black voters have nowhere else to go in November. Too much enthusiasm from Jesse would throw the other side of the racial see-saw into the air. Ethnics in Philadelphia distrust Jack- son intensely and are on the watch for signs that he wrung concessions out of Dukakis. In case they miss anything Frank Rizzo is sure to alert them: 'I'm going to go out there and talk about Mr Assistant- President Jesse.'

As the mines go off during the next three months, Dukakis is certain to see his lead narrow. In the end the fundamentals will count. Bush has the widest experience of any presidential candidate ever, and the election remains as it began, his to lose.