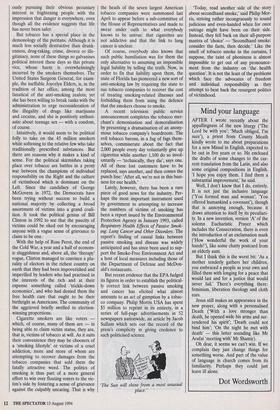 AF 1ER I wrote recently about the appallingness of the new liturgy (The Lord be with you'; 'Much obliged, I'm sure'), a priest from County Meath kindly wrote to me about preparations for a new Missal in English, expected to be out in five years or so. He enclosed the drafts of some changes to the cur- rent translation from the Latin, and also some original compositions in English. `I hope you enjoy them. I find them a substantial improvement,' he said.

Well, I don't know that I do, entirely. It is not just the inclusive language (`You formed man and woman% 'You offered humankind a covenant'), though that is annoying enough, because it draws attention to itself by its peculiari- ty. In a new invention, version 'A' of the solemn Eucharistic Prayer which includes the Consecration, there is even the introduction of an exclamation mark Mow wonderful the work of your hands!'), like some chatty postcard from an elderly aunt.

But I think this is the worst bit: 'As a mother tenderly gathers her children, you embraced a people as your own and filled them with longing for a peace that would last and for a justice that would never fail.' There's everything there: feminism, liberation theology and cloth ears.

Jesus still makes an appearance in the new prayer, along with a personalised Death (With a love stronger than death, he opened wide his arms and sur- rendered his spirit'; 'Death could not bind him'; 'On the night he met with death' — this latter sounding like Mr Arafat 'meeting with' Mr Shamir).

Oh dear, it seems we can't win. If we complain they just change things for something worse. And part of the value of language in church comes from its familiarity. Perhaps they could just leave ill alone.