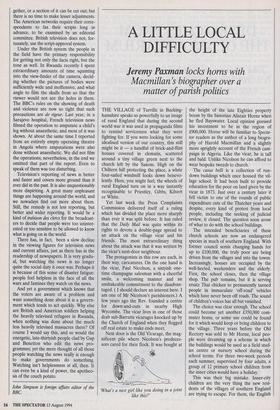 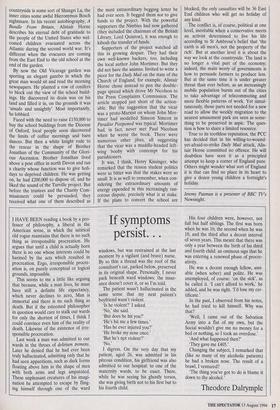 THE VILLAGE of Turville in Bucking- hamshire speaks so powerfully to an image of rural England that during the second world war it was used in propaganda films to remind servicemen what they were fighting for. If you were looking for some idealised version of our country, this still might be it — a handful of brick-and-flint houses covered in clematis, scattered around a tiny village green next to the church left by the Saxons. High on the Chiltern hill protecting the place, a white four-sailed windmill looks down benevo- lently. Here, you might feel, the wheels of rural England turn on in a way instantly recognisable to Priestley, Gibbs, Kilvert or White.

Yet last week the Press Complaints Commission delivered itself of a ruling which has divided the place more sharply than ever it was split before. It has ruled that the Daily Mail was quite within its rights to devote a double-page spread to an attack on the village vicar and his friends. The most extraordinary thing about the attack was that it was written by the vicar's next-door neighbour.

The protagonists in this row are each, in their way, caricatures. On the one hand is the vicar, Paul Nicolson, a sixtyish one- time champagne salesman with a cheerful smile, a welcoming manner and an unshakeable commitment to the disadvan- taged. ( I should declare an interest here. I am one of Mr Nicolson's parishioners.) A few years ago the Rev. founded a centre for down-and-outs in nearby High Wycombe. The vicar lives in one of those drab sub-Barratts vicarages knocked up by the Church of England when they flogged off real estate to make ends meet.

Next door is the Old Vicarage, the mag- nificent pile where Nicolson's predeces- sors cared for their flock. It was bought at `What's a nice girl like you doing in a joint like this?' the height of the late Eighties property boom by the historian Alistair Home when he fled Bayswater. Local opinion guessed his investment to be in the region of £900,000. Home will be familiar to Specta- tor readers as the author of a long biogra- phy of Harold Macmillan and a slightly more sprightly account of the French cam- paign in Algeria. Like the vicar, he is tall and bald. Unlike Nicolson he can afford to wear bespoke tweeds to church.

The casus belli is a collection of run- down buildings which once housed the vil- lage school. It had been built to provide education for the poor on land given by the vicar in 1873. Just over a century later it fell victim to one of the rounds of public expenditure cuts of the Thatcher years and despite, every kind of protest from local people, including the seeking of judicial review, it closed. The question soon arose of what to do with the school buildings.

The intended beneficiaries of these church schools are now an endangered species in much of southern England. With former council semis changing hands for up to £100,000, the truly poor are being driven from the villages and into the towns. Increasingly, houses are occupied by the well-heeled, weekenders and the elderly. First, the school closes, then the village shop. The pub remains, but it is serving ersatz Thai chicken to permanently tanned people in immaculate 'off-road' vehicles which have never been off roads. The sound of children's voices has all but vanished.

The choice was clear enough. The school could become yet another £350,000 com- muter home, or some use could be found for it which would keep or bring children to the village. Three years before the Old Rectory was sold to Mr Horne, local peo- ple were dreaming up a scheme in which the buildings would be used as a field stud- ies centre or nursery school during the school terms. For three two-week periods each summer, supervised by four adults, a group of 12 primary school children from the inner cities would have a holiday.

This was their big mistake. Inner-city children are the very thing the new resi- dents of the villages of southern England are trying to escape. For them, the English countryside is some sort of Shangri La, the inner cities some awful Hieronymus Bosch nightmare. In his recent autobiography, A Bundle From Britain, Alistair Home describes his eternal debt of gratitude to the people of the United States who wel- comed children evacuated across the Atlantic during the second world war. It's different when the evacuees are coming from the East End to the old school at the end of the garden.

By now the Old Vicarage garden was sporting an elegant gazebo in which the great man would sit and read the morning newspapers. He planted a row of conifers to block out the view of the school build- ings. He discovered its drain was on his land and filled it in, on the grounds it was `unsafe and unsightly'. Most importantly, he lobbied.

Faced with the need to raise £150,000 to buy the school buildings from the Diocese of Oxford, local people soon discovered the limits of coffee mornings and barn dances. But then a white knight rode to the rescue in the shape of Brother Jonathan of the Community of the Glori- ous Ascension. Brother Jonathan lived above a post office in north Devon and ran a charity whose function was to give holi- days to deprived children. He was getting on, he had £200,000 to dispose of, and he liked the sound of the Turville project. But before the trustees and the Charity Com- missioners could be persuaded, they received what one of them described as the most extraordinary begging letter he had ever seen. It begged them not to give funds to the project. With the powerful supporters the Nimbies had now gathered (they included the chairman of the British Library, Lord Quinton), it was enough to kibosh the transfer of funds.

Supporters of the project watched all this in growing despair. They had their own well-known backers, too, including the local author John Mortimer. But they did not have the animus. Invited to write a piece for the Daily Mail on the state of the Church of England, for example, Alistair Home chose instead to pen the double- page spread which drove Mr Nicolson to the Press Complaints Commission. The article stopped just short of the action- able. But the suggestion that the vicar was a proto-Marxist on whom John Mor- timer had modelled Simeon Simcox in Paradise Postponed was typical. Mortimer had, in fact, never met Paul Nicolson when he wrote the book. There were numerous other jibes, all suggesting that the vicar was a muddle-headed left- wing booby with contempt for his parishioners. It was, I think, Henry Kissinger, who remarked that the reason student politics were so bitter was that the stakes were so small. It is as well to remember, when con- sidering the extraordinary amounts of energy expended in this increasingly ran- corous dispute, precisely what is at stake. If the plans to convert the school are blocked, the only casualties will be 36 East End children who will get no holiday of any kind.

The conflict is, of course, political at one level, inevitable when a conservative meets an activist determined to live his life according to St Ambrose's belief that 'the earth is all men's, not the property of the rich'. But at another level it is about the way we look at the countryside. The land is no longer a vital part of the economy; indeed, the main worry of governments is how to persuade farmers to produce less. But at the same time it is under greater threat than ever before, as an increasingly mobile population bursts out of the cities to take advantage of telecommuting and more flexible patterns of work. Yet simul- taneously, those parts not needed for a new road to allow the weekly migration to the nearest amusement park are seen as some- thing to be preserved in aspic. The ques- tion is how to share a limited resource.

True to its toothless reputation, the PCC has decided that in his willing-to-wound- yet-afraid-to-strike Daily Mail attack, Alis- tair Home committed no offence. He will doubtless have seen it as a principled attempt to keep a corner of England pure. Others might wonder what sort of England it is that can find no place in its heart to give a dozen young children a fortnight's holiday.

Jeremy Paxman is a presenter of BBC TV's Newsnight.