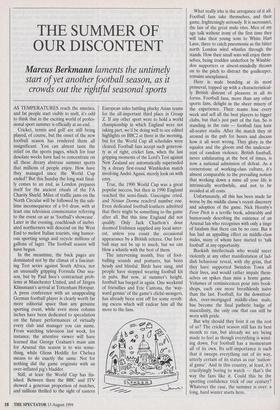 THE SUMMER OF OUR DISCONTENT

start of yet another football season, as it crowds out the rightful seasonal sports

AS TEMPERATURES reach the nineties, and fat people start visibly to melt, it's odd to think that in the exciting world of profes- sional sport summer is officially at an end.

Cricket, tennis and golf are still being played, of course, but the onset of the new football season has rendered them all insignificant. You can almost taste the relief on the sports pages, which for four desolate weeks have had to concentrate on all these dreary abstruse summer sports that millions of people enjoy. How have they managed since the World Cup ended? But this Sunday the long wait final- ly comes to an end, as London prepares itself for the ancient rituals of the FA Charity Shield. Miles of traffic jams on the North Circular will be followed by the sub- lime inconsequence of a 0-0 draw, with at least one television commentator referring to the event on air as 'football's showcase'. Later in the evening, coachloads of inebri- ated northerners will descend on the West End to molest Italian tourists, sing humor- ous sporting songs and recycle millions of gallons of lager. The football season will have begun.

In the meantime, the back pages are dominated not by the climax of a fascinat- ing Test series against South Africa, nor an unusually gripping Formula One sea- son, but by Paul Ince's contractual prob- lems at Manchester United, and of Kirgen Klinsmann's arrival at Tottenham Hotspur. A press conference with an unappealing German football player is clearly worth far more editorial space than any genuine sporting event, while even more column inches have been dedicated to speculation on the future performances of virtually every club and manager you can name. From watching television last week, for instance, the attentive viewer will have learned that George Graham's main aim for Arsenal this season is to win some- thing, while Glenn Hoddle for Chelsea means to do exactly the same. Not for nothing did the game originate with an over-inflated pig's bladder.

Still, at least the World Cup has fin- ished. Between them the BBC and ITV showed a generous proportion of matches, and millions thrilled to the sight of eastern European sides battling plucky Asian teams for the all-important third place in Group Z. If any other sport were to hold a world championship in which England were not taking part, we'd be doing well to see edited highlights on BBC2 at three in the morning, but for the World Cup all schedules were cleared. Football fans accept such generosi- ty as of right; cricket fans, when the last gripping moments of the Lord's Test against New Zealand are automatically superseded by a dreary first-round Wimbledon match involving Andre Agassi, merely look on with envy.

True, the 1990 World Cup was a great popular success, but then in 1990 England reached the semi-finals. Gascoigne cried, and Nessun Donna reached number one. Even dedicated football-loathers admitted that there might be something to the game after all. But this time England did not qualify. Only Jack Charlton's dour doomed Irishmen supplied any local 'inter- est, unless you count the occasional appearance by a British referee. Our foot- ball may not be up to much, but we can blow a whistle with the best of them.

The intervening month, free of foot- balling sounds and postures, has been heady and blissful. Birds have sung, and people have stopped wearing football kit in pubs. But now, at summer's height, football has barged in again, One weekend of friendlies and Eric Cantona, the 'way- ward genius' of the game's cliche-mongers, has already been sent off for some revolt- ing excess which will endear him all the more to the fans.

What really irks is the arrogance of it all. Football fans take themselves, and their game, frighteningly seriously. It is sacrosanct, the last of the great male rites. Men of my age talk without irony of the first time they will take their young sons to White Hart Lane, there to catch pneumonia as the bitter north London wind whistles through the stands. How their small sons will enjoy them- selves, being trodden underfoot by Wimble- don supporters or absent-mindedly thrown on to the pitch to distract the goalkeeper, remains unexplained.

Here is male bonding at its most primeval, topped up with a characteristical- ly British distrust of pleasure in all its forms. Football fans, more than any other sports fans, delight in the sheer misery of the experience. Their teams lose every week and sell all the best players to bigger clubs, but that's just part of the fun. So is standing in the rain — football fans hate all-seater stadia. After the match they sit around in the pub for hours and discuss how it all went wrong. They glory in the squalor and the gloom and the undercur- rent of random violence. British football, never exhilarating at the best of times, is now a national admission of defeat. As a cornerstone of working-class culture, it's almost comparable to the prevailing notion that working down a mine all your life is intrinsically worthwhile, and not to be avoided at all costs.

Unfortunately, all this has been made far worse by the middle classe's recent discovery and adoption of the game. Nick Hornby's Fever Pitch is a terrific book, admirably and humorously describing the existence of an Arsenal fan who recognises with only a tinge of fatalism that there can be no cure. But it has had an appalling effect on middle-class males, many of whom have started to 'talk football' at any opportunity.

Bookish intellectuals who would sneer violently at any other manifestation of lad- dish behaviour reveal, with shy grins, that they have supported Swindon Town all their lives, and would rather impale them- selves on spikes than miss a home game. Volumes of reminiscences pour into book- shops, each one more breathlessly naive than the last. Football, for the downtrod- den, over-mortgaged middle-class male, has become the final pathetic badge of masculinity, the only one that can still be worn with pride.

But why should they foist it on the rest of us? The cricket season still has its best month to run, but already we are being made to feel as though everything is wind- ing down. For football has a momentum all of its own. Its self-importance is such that it sweeps everything out of its way, utterly certain of its status as our 'nation- al game'. And in this country, at least, it's crucifyingly boring to watch — that's the way the fans like it. Could this be the sporting confidence trick of our century? Whatever the case, the summer is over: a long, hard winter starts here.