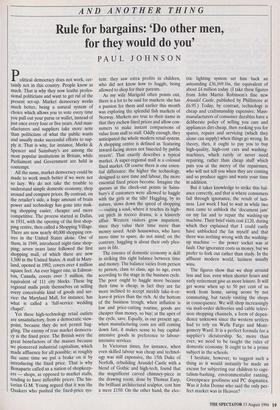 Rule for bargains: 'Do other men, for they would do you'

All the same, market democracy could be made to work much better if we were not so lazy. We do not take the trouble to understand simple domestic economy, shop around and compare prices. By contrast, on the retailer's side, a huge amount of brain power and technology has gone into mak- ing shopping easier, cheaper and more competitive. The process started in Dallas, in 1931, with the opening of the first shop- ping centre, then called a Shopping Village. There are now nearly 40,000 shopping cen- tres in the United States alone. One of them, in 1949, introduced night-time shop- ping; seven years later followed the first shopping mall, of which there are now 1,500 in the United States. A mall in Mary- land, opened in 1992, covers over 4 million square feet. An ever bigger one, in Edmon- ton, Canada, covers over 5 million, the equivalent of 111 city blocks. These big regional malls pride themselves on selling every conceivable kind of goods and ser- vice: the Maryland Mall, for instance, has what is called a `full-service wedding chapel'. Yet these high-technology retail outlets are unsatisfactory, from a democratic view- point, because they do not permit hag- gling. The enemy of true market democra- cy is the fixed price. The British were the great benefactors of the masses because we pioneered industrial capitalism, which made affluence for all possible; at roughly the same time we put a brake on it by introducing the fixed price. That is why Bonaparte called us a nation of shopkeep- ers — shops, as opposed to market stalls, tending to have inflexible prices. The his- torian G.M. Young argued that it was the Quakers who pushed the fixed-price sys- tern: they saw extra profits in children, who did not know how to haggle, being allowed to shop for their parents.

As my wife Marigold often points out, there is a lot to be said for markets: she has a passion for them and earlier this month was exploring the splendid fish markets of Norway. Markets are true to their name in that they eschew fixed prices and allow con- sumers to make instant comparisons of value from stall to stall. Oddly enough, they anticipated the whole modern retail system. A shopping centre is defined as 'featuring inward-facing stores not bisected by public streets'. That exactly describes a typical market. A super-regional mall is a colossal fixed market. Of course there is one essen- tial difference: the higher the technology, designed to save time and labour, the more essential fixed prices become. Imagine the queues at the check-out points in Sains- bury's if customers were allowed to haggle with the girls at the tills! Haggling, by its nature, slows down the speed of shopping — visiting a souk, where it reaches its high- est pitch in rococo drama, is a leisurely affair. Western visitors grow impatient, since they value their time more than money saved. Arab housewives, who have more time to spare, do not mind; on the contrary, haggling is about their only plea- sure in life.

The essence of domestic economy is skill in striking this right balance between time and money. The balance varies from person to person, class to class, age to age, even according to the stage in the business cycle. The poor ought to haggle more because their time is cheap; in fact they are far more inclined to accept meekly take-it-or- leave-it prices than the rich. At the bottom of the business trough, when inflation is low and price-cutting routine, goods are cheaper than money, so buy; at the apex of the cycle, save. Equally, in our present age, when manufacturing costs are still coming down fast, it makes sense to buy capital- intensive goods in preference to labour- intensive services.

In Victorian times, for instance, when even skilled labour was cheap and technol- ogy was still expensive, the 15th Duke of Norfolk, rebuilding Arundel Castle with a blend of Gothic and high-tech, found that the magnificent carved chimney-piece in the drawing room, done by Thomas Earp, the brilliant architectural sculptor, cost him a mere £150. On the other hand, the elec-

tric lighting system set him back an astounding £36,169.16s, the equivalent of about £4 million today. (I take these figures from John Martin Robinson's fine new Arundel Castle, published by Phillimore at £6.95.) Today, by contrast, technology is cheap and craftsmanship expensive. Mass- manufacturers of consumer durables have a deliberate policy of selling you cars and appliances dirt-cheap, then rooking you for spares, repairs and servicing (which they alone can supply) when things go wrong. In theory, then, it ought to pay you to buy high-quality, high-cost cars and washing- machines, which rarely or never need repairing, rather than cheap stuff which puts you at the mercy of the repairmen, who will not tell you when they are coming and so produce aggro and waste your time in addition.

But it takes knowledge to strike this bal- ance correctly, and that is where consumers fail through ignorance, the result of lazi- ness. Last week I had to wait in while two men came to unblock the 'document jam' on my fax and to repair the washing-up machine. Their brief visits cost £120, during which they explained that I could easily have unblocked the fax myself and that there was nothing wrong with the washing- up machine — the power socket was at fault. Our ignorance costs us money, but we prefer to fork out rather than study. In the affluent modern world, laziness usually wins.

The figures show that we shop around less and less, even when shorter hours and early retirement give us more leisure. It will get worse when up to 50 per cent of us work from home, saving aeons by not commuting, but rarely visiting the shops in consequence. We will shop increasingly via mail-order deliveries and cable televi- sion shopping channels, a form of depen- dence unknown since the western settlers had to rely on Wells Fargo and Mont- gomery Ward. It is a perfect formula for a supplier's dictatorship. So, more than ever, we need to be taught the rules of domestic economy. It ought to be a prime subject in the schools.

I hesitate, however, to suggest such a thing as it would instantly be made an excuse for subjecting our children to capi- talism-bashing, environmentalist ranting, Greenpeace goofiness and PC dogmatics. Was it John Donne who said the only per- fect market was in Heaven?