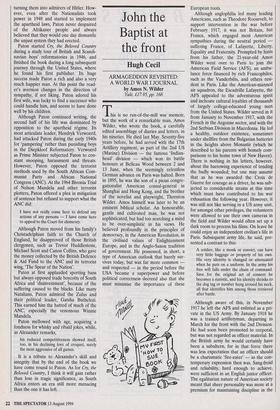 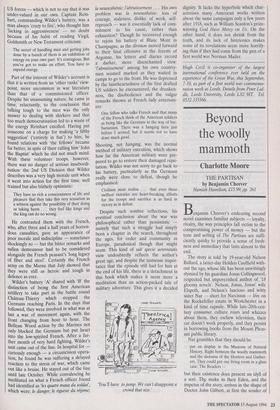 John the Baptist at the front

ARMAGEDDON REVISITED: A WORLD WAR I JOURNAL by Amos N. Wilder Yale, £17.95, pp. 168 This is no run-of-the-mill war memoir, but the work of a remarkable man, Amos Wilder, who wrote the book, a carefully edited assemblage of diaries and letters, in his nineties. He died last May. Seventy-five years before, he had served with the 17th Artillery regiment, as part of the 2nd US (Marine) Division — the famous 'Indian- head' division — which won its battle honours at Belleau Wood between 2 and 13 June, when the seemingly relentless German advance on Paris was halted. Born in 1895, he was the son of a pious congre- gationalist American consul-general in Shanghai and Hong Kong, and the brother of the novelist and playwright, Thornton Wilder. Amos himself was later to be an eminent biblical scholar. An honourable, gentle and cultivated man, he was not sophisticated, but had too searching a mind to be over-simplistic in his views. He believed profoundly in the principles of democracy, in the American Revolution, in the civilised values of Enlightenment Europe, and in the Anglo-Saxon tradition of government. He possessed, in short, a type of American outlook that barely sur- vives today, but was far more common and respected — in the period before the USA became a superpower and before political correctness decreed also that she must minimise the importance of these European roots.

Although anglophilia led many leading Americans, such as Theodore Roosevelt, to support intervention in the war before February 1917, it was not Britain, but France, which engaged most American sympathies during the neutral period suffering France, of Lafayette, Liberty, Equality and Fraternity. Prompted by hints from his father, the 21-year-old Amos Wilder went over to Paris to join the American Field Service (AFS), an ambu- lance force financed by rich Francophiles, such as the Vanderbilts, and others resi- dent in Paris. Like the American-manned air squadron, the Escadrille Lafayette, the AFS appealed to the adventurous spirit and inchoate cultural loyalties of thousands of largely college-educated young men from the United States. Wilder served in it from January to November 1917, with the French in the Argonne sector, and with the 2nd Serbian Division in Macedonia. He led a healthy, outdoor existence, sometimes under shellfire from the Bulgarian batteries in the heights above Monastir (which he described to his parents with homely com- parisons to his home town of New Haven). There is nothing in his letters, however, about the harrowing experience of tending the badly wounded; but one may assume that as he was awarded the Croix de Guerre for courage as a driver, he was sub- jected to considerable strains at this time which must have contributed to his war exhaustion the following year. However, it was still not like serving in a US army unit, for amongst other privileges, the volunteers were allowed to use their own cameras in the field and Wilder would often set up a dark room to process his films. On leave he could enjoy an independent civilian's life in Paris. Subsequent army life, he said, pre- sented a contrast to this:

A soldier, like a monk or convict, can have very little baggage or property of his own. His very identity is changed or attenuated when he puts on a uniform. In the army his free will falls under the chain of command. Save for the original act of consent he becomes a statistic, and his identity shrinks to the dog tag or number hung around his neck, all that identifies him among those retrieved after battle.

Although aware of this, in November 1917 he left the AFS and enlisted as a pri- vate in the US Army. By January 1918 he was a trained artilleryman, departing in March for the front with the 2nd Division. He had soon been promoted to corporal, but was not regarded as officer material. In the British army he would certainly have been a subaltern, for in that force there was less expectation that an officer should be a charismatic 'fire-eater' — as the con- temporary expression then was. Sang-froid and reliability, hard enough to achieve, were sufficient in an English junior officer. The egalitarian nature of American society meant that sheer personality was more at a premium for maintaining discipline in the US forces — which is not to say that it was under-valued in our own. Captain Rein- hart, commanding Wilder's battery, was a man always 'crazy to fire', who thought him `lacking in aggressiveness' — no doubt because of his habit of reading Virgil, Goldsmith or New Testament criticism:

The secret of handling men and getting jobs done by a bunch of them is an exhibition of energy on your own part. It's contagious. But you've got to make an effort. You have to expend energy.

Part of the interest of Wilder's account is that it is written from an 'other ranks' view- point, more uncommon in war literature than that of a commissioned officer. Despite his unassuming nature, he came in time, reluctantly, to the conclusion that talking tough to the men was the only answer to dealing with shirkers and that too much democratisation led to a waste of the energy Reinhart extolled. Having put someone on a charge for making 'a filthy suggestion' (`entirely in fun') to him, he found relations with 'the fellows' became far better, in spite of their calling him 'John the Baptist' which he did not much mind. With these volunteer troops, however, there was no danger of serious insubordi- nation: the 2nd US Division that Wilder describes was a very high morale unit when it went into action for the first time, well trained but also blithely optimistic:

They have so rich a consciousness of life and pleasure that they take this very sensation as a witness against the possibility of their doing or taking harm . .. they feel like kings and the king can do no wrong.

He contrasted them with the French, who, after three and a half years of horren- dous casualties, gave an appearance of poor morale and indiscipline — sometimes shockingly so — but the bitter remarks and sullen demeanour had to be considered alongside the French peasant's 'long legacy of fiber and steel'. Certainly the French army on the Marne that July showed that they were still as heroic and tough in defence as ever.

Wilder's battery 'A' shared with 'EV the distinction of being the first American artillery to take part in the battle round Château-Thierry which stopped the Germans reaching Paris. In the days that followed, they were involved in what was at last a war of movement again, with the front changing from hour to hour. The Belleau Wood action by the Marines not only blocked the Germans but put heart into the low-spirited French. After a fur- ther month of very hard fighting, Wilder's unit came out of the line. In hospital for curiously enough — a circumcision opera- tion, he found he was suffering a delayed reaction to the stress of war, which came out like a bruise. He stayed out of the line until late October. While convalescing he meditated on what a French officer friend had identified as Yes quatre maux du soldat', which were: le danger,. le rigueur du regime; la neurasthenie; Pabrutissement . . . His own problem was la neurasthenic loss of courage, staleness, dislike of work, self- reproach — was it essentially lack of com- mitment to his cause, rather than exhaustion? Though he recovered enough to rejoin his battery at Blanc Mont in Champagne, as the division moved forward to their final offensive in the forests of Argonne, his letters and diaries record a darker, more disenchanted view: Tabrutissemene among his own country- men seemed marked as they waited in camps to go to the front. He was depressed by the faintheartedness of the first drafted US soldiers he encountered, the drunken- ness, the disobedience and the vulgar remarks thrown at French lady entertain- ers: One fellow who talks French said that many of the French think of the American soldiers as being like the Germans in the way of bar- barianism. There was a hanging here just before I arrived, but it seems not to have done much good.

Shooting, not hanging, was the normal method of military execution, which shows how far the American military were pre- pared to go to restore their damaged repu- tation. Wilder was not sorry to go back to his battery, particularly as the Germans really were close to defeat, though he emphasised:

Civilians must realise ... that even these swiftest victories are heart-breaking efforts for the troops and sacrifice is as hard in victory as in defeat.

Despite such sombre reflections, his eventual conclusion about the war was philosophical rather than pessimistic namely that such a struggle had simply been a chapter in the search, throughout the ages, for order and community in Europe, paradoxical though that might seem. This kind of sub specie aeternitatis view undoubtedly reflects the author's great age, and despite the immense impor- tance that the episode still had for him at the end of his life, there is a detachment in this book which makes it seem more a meditation than an action-packed tale of military adventure. This gives it a decided `You'll have to jump. We can't disappoint a crowd that size.' dignity. It lacks the hyperbole which char- acterises many American works written about the same campaigns only a few years after 1918, such as William Scanlon's prize- winning God Have Mercy on Us. On the other hand, it does not shrink from the truth, and its lack of histrionics makes some of its revelations seem more horrify- ing than if they had come from the pen of a first world war Norman Mailer.

Hugh Cecil is co-organiser of the largest international conference ever held on the experience of the Great War, this September, 7-10, as part of a first world war commemo- ration week at Leeds. Details from Peter Lid- dle, Leeds University, Leeds LS2 9JT.