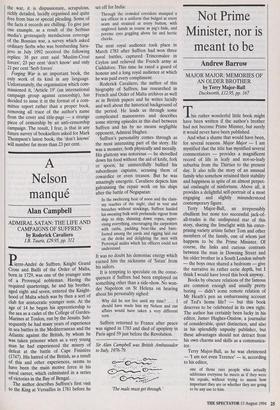 ADMIRAL SATAN: THE LIFE AND CAMPAIGNS OF SUFFREN by Roderick Cavaliero I.B. Tauris, £29.95, pp. 312 Perre-Andre de Suffren, Knight Grand Cross and Bailli of the Order of Malta, born in 1729, was one of the younger sons of a Provencal nobleman. Having the required quarterings, he and his brother, aged eight and seven, entered the Knight- hood of Malta which was by then a sort of club for aristocratic younger sons. At the age of 14 he began his apprenticeship to the sea as a cadet of the College of Gardes- . Marines at Toulon, run by the Jesuits. Sub- sequently he had many years of experience in sea battles in the Mediterranean and the Atlantic against the British, by whom he was taken prisoner when as a vexy young man he had experienced the misery of defeat at the battle of Cape Finistere (1747). His hatred of the British, as a result of this and other experiences, seems to have been the main motive force in his naval career, which culminated in a series of victories in the Bay of Bengal.

The author describes Suffren's first visit to the King at Versailles in 1781 before he set off for India:

Through the crowded corridors stumped a sea officer in a uniform that bulged at every seam and strained at every button, with ungloved hands as coarse as pig's hide, and porcine eyes goggling above fat and hectic cheeks.

The next royal audience took place in March 1783 after Suffren had won three naval battles, captured Trincomalee in Ceylon and relieved the French army at Cuddalore. This time he rated a guard of honour and a long royal audience at which he was paid every compliment. Roderick Cavaliero, the author of this biography of Suffren, has researched in French and Order of Malta archives as well as in British papers and he writes lucidly and well about the historical background of the period. He leads us through some complicated manoeuvres and describes some stirring episodes in this duel between Suffren and his by no means negligible opponent, Admiral Hughes. Suffren's personality comes through as the most interesting part of the story. He was a monster, both physically and morally. His gluttony was notorious — he shovelled down his food without the aid of knife, fork or spoon; he unmercifully bullied his subordinate captains, accusing them of cowardice or even treason. But he was amazingly energetic. Cavaliero depicts him galvanising the repair work on his ships after the battle of Negapatan:

In the sweltering heat of noon and the clam- my reaches of the night, clad in vest and breeches without stockings, Suffren hauled his sweating bulk with prehensile vigour from ship to ship, shinning down ropes, super- vising everything, encouraging the carpenters with oaths, padding bear-like and bare- footed among the yards and rigging laid out on the desks and delighting the men with Provengal asides which his officers could not understand.

It was no doubt his demoniac energy which earned him the nickname of 'Satan' from his sailors.

It is tempting to speculate on the conse- quences if Suffren had been employed on something other than a side-show. No won- der Napoleon on St Helena on hearing about his personality sighed:

Why did he not live until my time? . . . I should have made him my Nelson and our affairs would have taken a very different turn.

Suffren returned to France after peace was signed in 1783 and died of apoplexy in Paris aged 59 just before the Revolution.

`The male must get through.'