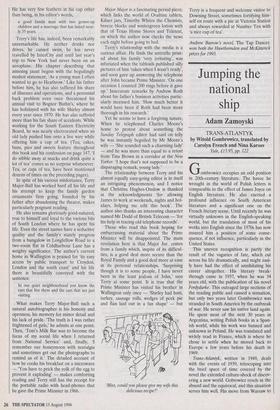 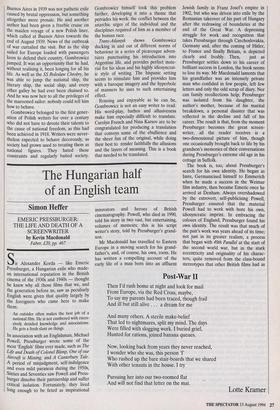 TRANS-ATLANTYK by Witold Gombrowicz, translated by Carolyn French and Nina Karsov Yale, f15.95, pp. 122 ombrowicz occupies an odd position in 20th-century literature. The havoc he wrought in the world of Polish letters is comparable to the effect of James Joyce on English literature. He also exerted a profound influence on South. American literature and a significant one on the French literary scene. Until recently he was virtually unknown in the English-speaking world, but the translation of most of his works into English since the 1970s has now assured him a position of some conse- quence, if not influence, particularly in the United States.

This uneven recognition is partly the result of the vagaries of fate, which cut across his life dramatically, and might easi- ly have had the effect of annihilating his career altogether. His literary break- through came in 1937, when he was 34 years old, with the publication of his novel Ferdydurke. This outraged large sections of the reading public and caused a sensation, but only two years later Gombrowicz was stranded in South America by the outbreak of war. He never saw his native land again. He spent most of the next 30 years in Argentina, writing Polish books in a Span- ish world, while his work was banned and unknown in Poland. He was translated and widely read in France, which is where he chose to settle when he moved back to Europe a few years before his death in 1969.

Trans-Atlantyk, written in 1949, deals with the events of 1939, telescoping into the brief space of time covered by the novel the extended culture-shock of discov- ering a new world. Gobrowicz revels in the absurd and the equivocal, and this situation serves him well. His move from Warsaw to Buenos Aires in 1939 was not pathetic exile caused by brutal oppression, but something altogether more prosaic. He and another author had been given a freebie cruise on the maiden voyage of a new Polish liner, which called at Buenos Aires towards the end of August 1939. News of the outbreak of war curtailed the visit. But as the ship sailed for Europe loaded with passengers keen to defend their country, Gombrowicz jumped. It was an opportunity that he had, without realising it, been longing for all his life. As well as the SS Boleslaw Chrobty, he was able to jump the national ship, the literary ship, the social ship, and every other galley he had ever been chained to. And he was now heir to all the privileges of the marooned sailor: nobody could tell him how to behave.

Gombrowicz belonged to the first gener- ation of Polish writers for over a century who did not have to devote their talents to the cause of national freedom, as this had been achieved in 1918. Writers were never- theless expected to behave decorously, as society had grown used to treating them as national figures. They hated these constraints and regularly baited society. Gombrowicz himself took this problem further, developing it into a theme that pervades his work: the conflict between the anarchic urges of the individual and the disciplines required of him as a member of the human race.

Trans-Atlantyk shows Gombrowicz ducking in and out of different norms of behaviour in a series of picaresque adven- tures punctuating his introduction into Argentine life, and provides perfect mate- rial for his ideas and his highly idiosyncrat- ic style of writing. The hispanic setting seems to stimulate him and provides him with a baroque imagery and the hyperbole of manners he uses to such entertaining effect.

Rousing and enjoyable as he can be, Gombrowicz is not an easy writer to read. His word-play, bathos and allusiveness make him especially difficult to translate. Carolyn French and Nina Karsov are to be congratulated for producing a translation that conveys some of the ebullience and the sheer fun of the original, while doing their best to render faithfully the allusions and the layers of meaning. This is a book that needed to be translated.