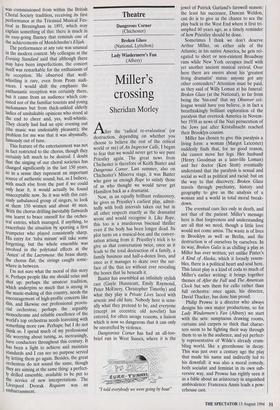 After the 'radical re-evaluation' (or destruction, depending on whether you choose to believe the rest of the critical world or me) of An Inspector Calls, I began to fear that we would never get to see pure Priestley again. The great news from Chichester is therefore of Keith Baxter and Dangerous Corner. Last summer, also on Chichester's Minerva stage, it was Baxter who gave us enough Rope to satisfy those of us who thought we would never get Hamilton back as a dramatist.

Now, in an equally brilliant rediscovery, he gives us Priestley's earliest play, admit- tedly with both intervals taken out but in all other respects exactly as the dramatist wrote and would recognise it. Like Rope, this too is a murderous bisexual thriller even if the body has been longer dead. Its plot turns on a musical-box and the conver- sation arising from it: Priestley's trick is to give us that conversation twice, once as it leads to the total destruction of a family, a family business and half-a-dozen lives, and once as it manages to skate over the sur- face of the thin ice without ever revealing the bones that lie beneath it.

Baxter has assembled an infinitely stylish cast (Gayle Hunnicutt, Emily Raymond, Peter McEnery, Christopher Timothy) and what they play is Private Lives laced with arsenic and old hate. Nobody here is sexu- ally what they pretend to be, and everyone (except an eccentric old novelist) has entered, for often savage reasons, a liaison which is now so dangerous that it can only be unravelled by violence.

Dangeorous Corner has had an all-too- brief run in West Sussex, where it is the "I told everybody we were going by boat" jewel of Patrick Garland's farewell season: the least his successor, Duncan Weldon, can do is to give us the chance to see the play back in the West End where it first tri- umphed 60 years ago, as a timely reminder of how Priestley should be done.

Sometimes I think we don't deserve Arthur Miller, on either side of the Atlantic; in his native America, he gets rel- egated to short or non-existent Broadway runs while New York occupies itself with yet another ancient musical revival. Over here there are sneers about his 'greatest living dramatist' status: anyone got any other contenders? Attention must be paid, as they said of Willy Loman at his funeral: Broken Glass (at the National), so far from being the `bin-end' that my Observer col- league would have you believe, is in fact a breathtakingly brilliant exploration of the paralysis that overtook America in Novem- ber 1938 as news of the Nazi persecution of the Jews just after Kristallnacht reached their Brooklyn cousins.

Miller has chosen to give this paralysis a living form: a woman (Margot Leicester) suddenly finds that, for no good reason, she cannot move her legs. Her husband (Henry Goodman as a later-life Loman) and her doctor (Ken Stott) eventually understand that the paralysis is sexual and social as well as political and racial: but on the way to that discovery, Broken Glass travels through psychiatry, history and geography to give us the analysis of a woman and a world in total moral break- down.

The eventual cure lies only in death, and not that of the patient: Miller's message here is that forgiveness and understanding are all that we need, though a little love would not come amiss. The waste is of lives in Brooklyn as well as Berlin, and the destruction is of ourselves by ourselves. In its way, Broken Galss is as chilling a play as Miller has ever written; yet unlike Pinter's A Kind of Alaska, which it loosely resem- bles, there is a political heart and soul here. This latest play is a kind of coda to much of Miller's earlier writing: it brings together themes of After the Fall and The American Clock but sets them for cello rather than full orchestra: once again, his director, David Thacker, has done him proud.

Philip Prowse is a director who always designs his own major productions, so for Lady Windermere's Fan (Albery) we start with the sets: sumptuous drawing rooms, curtains and carpets so thick that charac- ters seem to be fighting their way through them to us in the audience, and yet perfect- ly representative of Wilde's already crum- bling world, like a greenhouse in decay. This was just over a century ago the play that made his name and indirectly led to his downfall: it was also a moral comedy, both socialist and feminist in its own sub- versive way, and Prowse has rightly seen it as a fable about an aristocracy in anguished ambivalence: Francesca Annis leads a pow- erhouse cast.