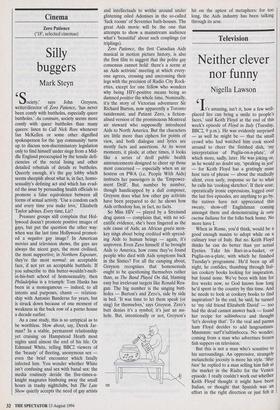 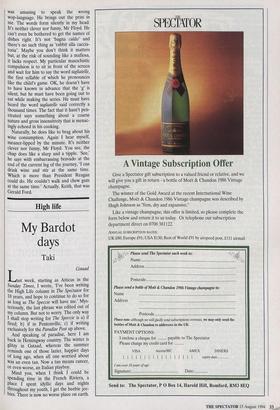 Neither clever nor funny

It's amazing, isn't it, how a few well- placed lire can bring a smile to people's faces,' said Keith Floyd at the end of this week's episode of Floyd in Italy (Tuesday, BBC2, 9 p.m.). He was evidently surprised — as well he might be — that the small crowd who had watched him cook stood around to cheer the finished dish, 'my interpretation of Puglia-on-a-plate', of which more, sadly, later. He was joking or, as he would no doubt say, 'speaking in jest' — for Keith Floyd has a gratingly mine host turn of phrase — about the studiedly silent, even surly, response so far to what he calls his 'cooking sketches'. If their sour, operatically ironic expressions, logged over the last five episodes, are anything to go by, the natives have not appreciated this sweaty, show-off Englishman coming amongst them and demonstrating la vera cucina Italiana for the folks back home. No more have I.

When in Rome, you'd think, would be a good enough maxim to adopt while on a culinary tour of Italy. But no. Keith Floyd thinks he can do better than yer actual Eyeties. Take his Bari-in-a-basket, or Puglia-on-a-plate, with which he finished Tuesday's programme. He'd been up all night, he confides, thumbing through Ital- ian cookery books looking for inspiration, but found none. We've been with him for five weeks now, so God knows how long he'd spent in the country by this time. And he needs to look at cookery books to find inspiration? In the end, he said, he turned to 'my old friend Elizabeth David' — too bad the dead cannot answer back — found her recipe for saltimbocca and thought `let's develop that'. To the veal and parrna ham Floyd decides to add langoustines. Mmmmm: surfn'saltimbocca. No wonder, coming from a man who advertises frozen fish suppers on television.

But this is not a man who's sensitive to his surroundings. An oppressive, strangely melancholic jocosity is more his style. `Mu3' Bien' he replied to a man selling him fish at the market in the Rialto for the Venice episode. I really couldn't work out whether Keith Floyd thought it might have been Italian, or thought that Spanish was an effort in the right direction or just felt it was amusing to speak the wrong wop-language. He brings out the priss in me. The words form silently in my head: It's neither clever nor funny, Mr Floyd. He can't even be bothered to get the names of dishes right. It's not `bagna caldo' and there's no such thing as 'rabbit alla caccia- toria'. Maybe you don't think it matters but, at the risk of sounding like a mafiosa, It lacks respect. My particular masochistic compulsion is to sit in front of the screen and wait for him to say the word tagliatelle, the first syllable of which he pronounces like the child's game. OK, he doesn't have to have known in advance that the 'g' is silent, but he must have been going out to eat while making the series. He must have heard the word tagliatelle said correctly a thousand times. The fact that it hasn't pen- etrated says something about a coarse nature and gross insensitivity that is menac- ingly echoed in his cooking.

Naturally, he does like to brag about his wine consumption. Again I hear myself, meaner-lipped by the minute. It's neither clever nor funny, Mr Floyd. You see, the chap does like a slurp and a tipple. 'See,' he says with embarrassing bravado at the end of the current leg of the journey, 'I can drink wine and stir at the same time. Which is more than President Reagan could do. He couldn't walk and chew gum at the same time.' Actually, Keith, that was Gerald Ford.