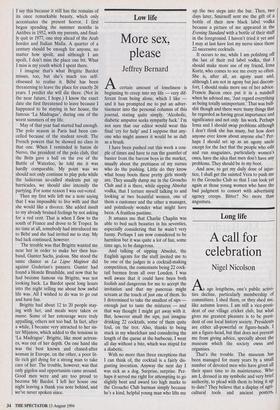 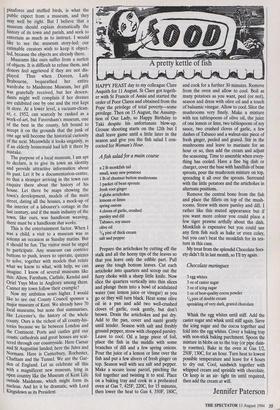 A call for celebration

Aage lengthens, one's public activi- ties decline, particularly membership of committees. I shed them, or they shed me, like autumn leaves. I am still a vice-presi- dent of our village cricket club, but what gives me greatest pleasure is to be presi- dent of our local history society. Presidents are either all-powerful or figure-heads. I am a figure-head, but that does not prevent me from giving advice, specially about the museum which the society owns and organises.

That's the trouble. The museum has been managed for many years by a small number of devoted men who have given all their spare time to its maintenance. Who am I, dressed in my symbolic and very brief authority, to plead with them to bring it up to date? They believe that a display of agri- cultural tools and ancient posters, pinafores and stuffed birds, is what the public expect from a museum, and they may well be right. But I believe that a museum should explain dramatically the history of its town and parish, and seek to entertain as much as to instruct. I would like to see the museum story-led: our estimable curators wish to keep it object- led, because the objects are already there. Museums like ours suffer from a surfeit of objects. It is difficult to refuse them, and donors feel aggrieved if they are not dis- played. Thus when Doreen, Lady Brabourne, bequeathed her entire wardrobe to Maidstone Museum, her gift was gratefully received, but her descen- dants might well complain if her dresses are exhibited one by one and the rest kept in store. At a lower level, a vacuum-clean- er, c. 1952, can scarcely be ranked as a work-of-art, but Faversham's museum, one of the best in the county, felt bound to accept it on the grounds that the junk of one age will become the historical curiosity of the next. Meanwhile it looks ungainly, as if an elderly housemaid had left it there by mistake.

The purpose of a local museum, I am apt to declare, is to give its town an identity and provide attractive information about its past. Let it be a documentation-centre, so that a stranger arriving in the town can enquire there about the history of his house. Let there be maps showing the town's development, models of the main street, dating all the houses, a mock-up of the interior of a labourer's cottage in the last century, and if the main industry of the town, like ours, was handloom weaving, there must be a handloom that works.

This is the entertainment factor. When I was a child, a visit to a museum was as solemn an occasion as Sunday matins. But it should be fun. The visitor must be urged to participate. Any museum can contrive buttons to push, levers to operate, quizzes to solve, together with models that relate what we know to what, with help, we can imagine. I know of several museums like this: Alton, Farnham, Carlisle, Kendal and Oriel Ynys Mon in Anglesey among them. Cannot my town follow their example? Now my ambition soars higher. I would like to see our County Council sponsor a major museum of Kent. We already have 70 local museums, but none that summarises, like Leicester's, the history of the whole county. Ours is the richest of all county-his- tories because we lie between London and the Continent. Ports and castles gird our coasts; cathedrals and great houses are scat- tered through our countryside. Here Caesar and St Augustine landed; here the Jutes and Normans. Here is Canterbury, Rochester, Chatham and the Tunnel. We are the Gar- den of England. Let us celebrate all this With a magnificent new museum, lying in open country like the Museum of Kent Life outside Maidstone, which might form its nucleus. And let it be dramatic, with Lord Kingsdown as its President.