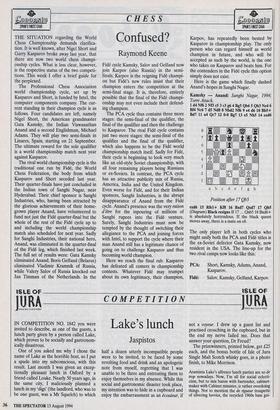 THE SITUATION regarding the World Chess Championship demands clarifica- tion. It is well known, after Nigel Short and Garry Kasparov broke away last year, that there are now two world chess champi- onship cycles. What is less clear, however, is the respective status of the two competi- tions. This week I offer a brief guide for the perplexed.

The Professional Chess Association world championship cycle, set up by Kasparov and Short, is funded by Intel, the computer components company. The cur- rent standing in their champion cycle is as follows. Four candidates are left, namely Nigel Short, the American grandmaster Gata Kamsky, the Indian Viswanathan Anand and a second Englishman, Michael Adams. They will play two semi-finals in Linares, Spain, starting on 21 September. The ultimate reward for the sole qualifier is a world championship match next year against Kasparov.

The rival world championship cycle is the traditional one run by Fide, the World Chess Federation, the body from which Kasparov and Short seceded last year. Their quarter-finals have just concluded in the Indian town of Sanghi Nagar, near Hyderabad. Their chief sponsor is Sanghi Industries, who, having been attracted by the glorious achievements of their home- grown player Anand, have volunteered to fund not just the Fide quarter-final but the whole of the rest of the Fide cycle up to and including the world championship match also scheduled for next year. Sadly for Sanghi Industries, their national hero, Anand, was eliminated in the quarter-final of the Fide leg, which finished last week. The full set of results were: Gata Kamsky eliminated Anand; Boris Gelfand (Belarus) eliminated Vladimir Kramnik of Russia, while Valery Salov of Russia knocked out Jan Timman of the Netherlands. In the Fide cycle Kamsky, Salov and Gelfand now join Karpov (also Russia) in the semi- finals. Karpov is the reigning Fide champi- on but Fide's new rules insist that their champion enters the competition at the semi-final stage. It is, therefore, entirely possible that the final of the Fide champi- onship may not even include their defend- ing champion.

The PCA cycle thus contains three more stages: the semi-final of the qualifier, the final of the qualifier and then the challenge to Kasparov. The rival Fide cycle contains just two more stages: the semi-final of the qualifier and the final of the qualifier, which also happens to be the Fide world championship match itself. Sadly for Fide, their cycle is beginning to look very much like an old-style Soviet championship, with all four remaining players being Russians or ex-Soviets. In contrast, the PCA cycle has an attractive publicity mix of Russia, America, India and the United Kingdom. Even worse for Fide, and for their Indian sponsors, Sanghi Industries, is the abrupt disappearance of Anand from the Fide cycle. Anand's presence was the very raison d'etre for the inpouring of millions of Sanghi rupees into the Fide venture. Surely, Sanghi Industries must now be tempted by the thought of switching their allegiance to the PCA and joining forces with Intel, to support the cycle where their man Anand still has a legitimate chance of going on to challenge Kasparov and thus becoming world champion.

Here we reach the final rub. Kasparov has defeated all corners in championship contests. Whatever Fide may trumpet about its own legitimacy, their champion, Karpov, has repeatedly been bested by Kasparov in championship play. The only person who can regard himself as world champion in future, and who will be accepted as such by the world, is the one who takes on Kasparov and beats him. For the contenders in the Fide cycle this option simply does not exist.

Here is the game which finally dashed Anand's hopes in Sanghi Nagar.

The only player left in both cycles who might unify both the PCA and Fide titles is the ex-Soviet defector Gata Kamsky, now resident in the USA. The line-up for the two rival camps now looks like this: PCA: Short, Kamsky, Adams, Anand, Kasparov.