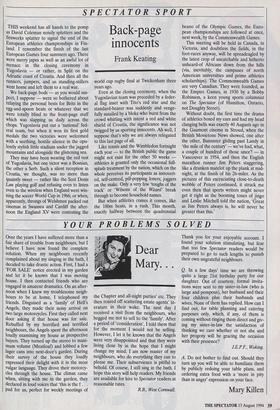 THIS weekend has all hands to the pomp as David Coleman noisily splutters and the fireworks splatter to signal the end of the European athletics championships in Fin- land. I remember the finish of the last European Games four summers ago. There were merry japes as well as an awful lot of menace in the closing ceremony in Yugoslavia — or rather, in Split on the Adriatic coast of Croatia. And then all the runners, jumpers, and us standing-stillers went home and left them to a real war.

We back-page hods — as you would sus- pect, I suppose — were so bothered about relaying the personal bests for Brits in the egg-and-spoon heats or whatever that we were totally blind to the front-page stuff which was slapping us daily across the chops. Yugoslavia put out a 'national' fed- eral team, but when it won its first gold medals the two victories were welcomed with a seething, hostile silence in the opu- lently stylish little stadium under the jagged mountains and alongside the glistening sea.

They may have been wearing the red vest of Yugoslavia, but one victor was a Bosnian, the other a Serb. Such a silent reception in Croatia, we thought, was no more than quaintly sweet — rather like the Scot Denis Law playing golf and refusing even to listen even to the wireless when England were win- ning the soccer World Cup in 1966; or when, apparently, throngs of Welshmen packed out cinemas in Swansea and Cardiff the after- noon the England XV were contesting the world cup rugby final at Twickenham three years ago. Even at the closing ceremony, when the Yugoslavian team was preceded by a feder- al flag inset with Tito's red star and the standard-bearer was suddenly and venge- fully assailed by a bloke who burst from the crowd whirling with intent a red and white shield of Croatia, the significance was not twigged by us sporting innocents. Ah well, I suppose that's why we are always relegated to this last page of all.

Like tennis and the Wimbledon fortnight each year — to the British public the game might not exist for the other 50 weeks athletics is granted only the occasional full- splash treatment by the nation, which on the whole perceives its participants as introvert- ed, self-centred, pill-popping loners; joggers on the make. Only a very few 'toughs of the track' or 'Wilsons of the Wizard' break through to become household names.

But when athletics comes it comes, like the 100m heats, in a rush. This month, exactly halfway between the quadrennial beano of the Olympic Games, the Euro- pean championships are followed at once, next week, by the Commonwealth Games.

This meeting will be held in Canada, in Victoria, and doubtless the fields, in the foot-races anyway, will be spreadeagled by the latest crop of uncatchable and hitherto unheard-of Africans down from the hills (via, inevitably, the campuses of north American universities and prime athletics scholarships). The Commonwealth Games are very Canadian. They were founded, as the Empire Games, in 1930 by a Bobby Robinson, a keen young sports columnist on The Spectator (of Hamilton, Ontario, not Doughty Street).

Without doubt, the first time the drama of athletics boxed my ears and had my head clanging bells was exactly 40 Augusts ago in the Gaumont cinema in Stroud, when the British Movietone News showed, one after the other, Bannister gliding past Landy in `the mile of the century' — we've had, what, a couple of hundred of those since? — in Vancouver in 1954, and then the English marathon runner Jim Peters staggering, like a drunken matelot up the plank at mid- night, at the finish of his 26-miler. As the pictures of this excruciating close-to-death wobble of Peters continued, it struck me even then that sports writers might never get it right as the booming tones of jingo and Leslie Mitchell told the nation, 'Great as Jim Peters always is, he will never be greater than this.'