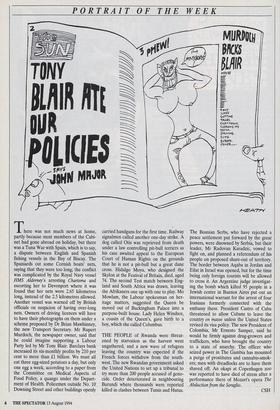 There was not much news at home, partly because most members of the Cabi- net had gone abroad on holiday, but there was a Tuna War with Spain, which is to say, a dispute between English and Spanish fishing vessels in the Bay of Biscay. The Spaniards cut some Cornish boats' nets, saying that they were too long; the conflict was complicated by the Royal Navy vessel HMS Alderney's arresting Charisma and escorting her to Devonport where it was found that her nets were 2.65 kilometres long, instead of the 2.5 kilometres allowed. Another vessel was warned off by British officials on suspicion of having over-long nets. Owners of driving licences will have to have their photographs on them under a scheme proposed by Dr Brian Mawhinney, the new Transport Secretary. Mr Rupert Murdoch, the newspaper owner, said that he could imagine supporting a Labour Party led by Mr Tony Blair. Barclays bank increased its six-monthly profits by 210 per cent to more than £1 billion. We must all eat three egg-sized potatoes a day, but only one egg a week, according to a paper from the Committee on Medical Aspects of Food Policy, a quango under the Depart- ment of Health. Policemen outside No. 10 Downing Street and other buildings openly

carried handguns for the first time. Railway signalmen called another one-day strike. A dog called Otis was reprieved from death under a law controlling pit-bull terriers as his case awaited appeal to the European Court of Human Rights on the grounds that he is not a pit-bull but a great dane cross. Hidalgo Moya, who designed the Skylon at the Festival of Britain, died, aged 74. The second Test match between Eng- land and South Africa was drawn, leaving the Afrikaners one up with one to play. Mo Mowlam, the Labour spokesman on her- itage matters, suggested the Queen be moved out of Buckingham Palace into a purpose-built house. Lady Helen Windsor, a cousin of the Queen's, gave birth to a boy, which she called Columbus.

THE PEOPLE of Rwanda were threat- ened by starvation as the harvest went ungathered, and a new wave of refugees leaving the country was expected if the French forces withdrew from the south- west. The new Rwandan government asked the United Nations to set up a tribunal to try more than 200 people accused of geno- cide. Order deteriorated in neighbouring Burundi where thousands were reported killed in clashes between Tutsis and Hutus.

The Bosnian Serbs, who have rejected a peace settlement put forward by the great powers, were disowned by Serbia, but their leader, Mr Radovan Karadzic, vowed to fight on, and planned a referendum of his people on proposed share-out of territory. The border between Aqaba in Jordan and Eilat in Israel was opened, but for the time being only foreign tourists will be allowed to cross it. An Argentine judge investigat- ing the bomb which killed 95 people in a Jewish centre in Buenos Aires put out an international warrant for the arrest of four Iranians formerly connected with the embassy there. President Castro of Cuba threatened to allow Cubans to leave the country en masse unless the United States revised its visa policy. The new President of Colombia, Mr Ernesto Samper, said he would be firmly against drug-growers and traffickers, who have brought the country to a state of anarchy. The officer who seized power in The Gambia has mounted a purge of prostitutes and cannabis-smok- ers; men with dreadlocks are to have them shaved off. An okapi at Copenhagen zoo was reported to have died of stress after a performance there of Mozart's opera The Abduction from the Seraglio.