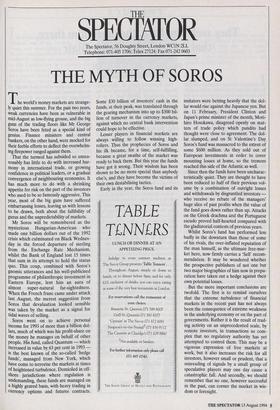 THE MYTH OF SOROS

The world's money markets are strange- ly quiet this summer. For the past two years, weak currencies have been as vulnerable in mid-August as low-flying grouse, and the big guns of the trading floors like Mr George Soros have been feted as a special kind of genius. Finance ministers and central bankers, on the other hand, were mocked for their feeble efforts to deflect the overwhelm- ing firepower ranged against them.

That the turmoil has subsided so unsea- sonably has little to do with increased har- mony in international trade, or growing confidence in political leaders, or a gradual convergence of neighbouring economies. It has much more to do with a shrinking appetite for risk on the part of the investors who used to be so famously aggressive. This year, most of the big guns have suffered embarrassing losses, leaving us with lessons to be drawn, both about the fallibility of gurus and the unpredictability of markets.

Mr Soros will be remembered as the mysterious Hungarian-American who made one billion dollars out of the 1992 crisis which culminated on Black Wednes- day in the forced departure of sterling from the Exchange Rate Mechanism, whilst the Bank of England lost 15 times that sum in its attempt to hold the status quo. This coup, combined with Soros's gnomic utterances and his well-publicised programme of philanthropic investment in Eastern Europe, lent him an aura of almost super-natural far-sightedness. When the French franc came under attack last August, the merest suggestion from Soros that devaluation looked sensible was taken by the market as a signal for tidal waves of selling. Soros went on to achieve personal income for 1993 of more than a billion dol- lars, much of which was his profit-share on the money he manages on behalf of other People. His fund, called Quantum — which increased in value by 63 per cent in 1993 is the best known of the so-called 'hedge funds', managed from New York, which have come to terrorise the markets at times of heightened turbulence. Domiciled in off- shore jurisdictions where regulation is undemanding, these funds are managed on a highly geared basis, with heavy trading in currency options and futures contracts. Some $30 billion of investors' cash in the funds, at their peak, was translated through the gearing mechanism into up to $300 bil- lion of turnover in the currency markets, against which no central bank intervention could hope to be effective.

Lesser players in financial markets are always willing to follow winning high- rollers. Thus the prophecies of Soros and his ilk became, for a time, self-fulfilling, because a great swathe of the market was ready to back them. But this year the funds have got it wrong. Their wisdom has been shown to be no more special than anybody else's, and they have become the victims of their own destabilising tactics.

Early in the year, the Soros fund and its imitators were betting heavily that the dol- lar would rise against the Japanese yen. But on 11 February, President Clinton and Japan's prime minister of the month, Mori- hiro Hosokawa, disagreed openly on mat- ters of trade policy which pundits had thought were close to agreement. The dol- lar slumped, and on St Valentine's Day Soros's fund was massacred to the extent of some $600 million. As they sold out of European investments in order to cover mounting losses at home, so the tremors reached this side of the Atlantic as well.

Since then the funds have been uncharac- teristically quiet. They are thought to have been reduced to half of their previous vol- ume by a combination of outright losses and withdrawals by disgruntled investors who receive no rebate of the managers' huge slice of past profits when the value of the fund goes down rather than up. Attacks on the Greek drachma and the Portuguese escudo proved half-hearted compared with the gladiatorial contests of previous years.

Whilst Soros's fund has performed less badly in the downturn than those of some of his rivals, the over-inflated reputation of the man himself, as the ultimate free-mar- ket hero, now firmly carries a 'Sell' recom- mendation. It may be wondered whether the prospective publishers of not one but two major biographies of him now in prepa- ration have taken out a hedge against their own potential losses.

But the more important conclusions are twofold. The first is to remind ourselves that the extreme turbulence of financial markets in the recent past has not always been the consequence of extreme weakness in the underlying economy or on the part of governments. Rather it is the result of trad- ing activity on an unprecedented scale, by remote investors, in transactions so com- plex that no regulatory authority has yet attempted to control them. This may be a vigorous expression of free markets at work, but it also increases the risk for all investors, however small or prudent, that a misreading of signals by a small group of speculative players may one day cause a catastrophic fall. And secondly, we should remember that no one, however successful in the past, can corner the market in wis- dom or foresight.