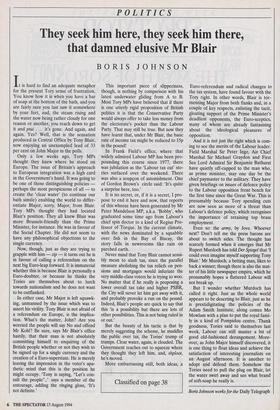 It is hard to find an adequate metaphor for the present Tory sense of frustration. You know how it is when you have a bar of soap at the bottom of the bath, and you are fairly sure you last saw it somewhere by your feet, and, the steam rising and the water now being rather cloudy for one reason or another, you reach down to get it and ptui . . . it's gone. And again, and again. Yes? Well, that is the sensation produced in Central Office by Tony Blair, now enjoying an unexampled lead of 33 per cent on John Major in the polls.

Only a few weeks ago, Tory MPs thought they knew where he stood on Europe. The issue of Britain's approach to European integration was a high card in the Government's hand. It was going to be one of those distinguishing policies perhaps the most perspicuous of all — to create the 'clear water' (to continue our bath simile) enabling the world to differ- entiate Blajor, sorry, Major, from Blair. Tory MPs thought they had located Blair's position. They all knew Blair was more Brussels-friendly than the Prime Minister, for instance. He was in favour of the Social Chapter. He did not seem to have any philosophical objections to the single currency.

Now, though, just as they are trying to grapple with him — zip — it turns out he is in favour of calling a referendum on the next big Euro-leap forward. It is immaterial whether this is because Blair is personally a Euro-doubter, or because he thinks the Tories are themselves about to lurch towards nationalism and he does not want to be outflanked.

In either case, Mr Major is left squawk- ing, unmanned by the issue which was to assert his virility. Tony Blair is not afraid of a referendum on Europe, is the implica- tion. What's the matter, John? Are you worried the people will say No and offend Mr Kohl? Be sure, says Mr Blair's office hastily, that their man is not absolutely committing himself to enquiring of the British people whether or not they wish to be signed up for a single currency and the creation of a Euro-superstate. He is merely leaving the impression in the voter's apa- thetic mind that this is the position he might occupy. 'Tony is saying, "Let's con- sult the people",' says a member of the entourage, adding the ringing gloss, 'It's not definite.' This important piece of slipperiness, though, is nothing by comparison with his latest underwater gliding from A to B. Most Tory MPs have believed that if there is one utterly rigid proposition of British politics it is that the Conservative Party would always offer to take less money from the electorate's pocket than the Labour Party. That may still be true. But now they have learnt that, under Mr Blair, the basic rate of income tax might be reduced to 15p in the pound!

In Frank Field's office, where that widely admired Labour MP has been pro- pounding this course since 1977, there was jubilation as the 'Labour tax cut' sto- ries surfaced over the weekend. There was also a soupcon of astonishment. One of Gordon Brown's circle said: 'It's quite a surprise here, too.'

It is no secret, or, if it is a secret, I pro- pose to end it here and now, that reports of this wheeze have been generated by Mr Peter Mandelson MP, a.k.a. 'Bobby', who graduated some time ago from Labour's chief spin doctor to a kind of Regius Pro- fessor of Torque. In the current climate, with the news dominated by a squabble over fish in the Bay of Biscay, the story falls in newsrooms like rain on parched earth.

Never mind that Tony Blair cannot sensi- bly mean to slash tax, since the parallel measure abolishing the tax reliefs on pen- sions and mortgages would infuriate the very middle-class voters he is trying to woo. No matter that if he really is proposing a lower overall tax take and higher PSBR, the City will never let him get away with it, and probably provoke a run on the pound. Indeed, Blair's people are quick to say that this 'is a possibility but there are lots of other possibilities. This is not being ruled in or out.'

But the beauty of his tactic is that by merely suggesting the scheme, he muddles the public over tax, the Tories' trump of trumps. Clear water, again, is clouded. The Government reaches out to squeeze where they thought they left him, and, shploot, he's moved.

More embarrassing still, both ideas, a Euro-referendum and radical changes to the tax system, have found favour with the Tory right. In other words, Blair is tor- menting Major from both flanks and, in a couple of key respects, enlisting the tacit, gloating support of the Prime Minister's deadliest opponents, the Euro-sceptics, many of whom are already fantasising about the ideological pleasures of opposition.

And it is not just the right which is com- ing to see the merits of the Labour leader. Field Marshal Sir Peter Inge, Air Chief Marshal Sir Michael Graydon and First Sea Lord Admiral Sir Benjamin Bathurst have quietly off-capped to the man who, as prime minister, may one day be the chief paymaster to the military. They have given briefings on issues of defence policy to the Labour opposition front bench for the first time since the Great War. This is presumably because Tory spending cuts are now seen as more of a threat than Labour's defence policy, which recognises the importance of retaining top brass employment.

Even so: the army, by Jove. Whoever next? Don't tell me the press barons are about to switch sides. The thought has scarcely formed when it emerges that Mr Rupert Murdoch has told Der Spiegel that 'I could even imagine myself supporting Tony Blair.' Mr Murdoch, a betting man, likes to back a winner; though there is also the mat- ter of his little newspaper empire, which he presumably hopes a flattered Labour will not break up.

But I wonder whether Murdoch has called it right. Just as the whole world appears to be deserting to Blair, just as he is prestidigitating the policies of the Adam Smith Institute, along comes Mo Mowlam with a plan to put the royal fami- ly in a kind of Pompidou .centre. Thank goodness, Tories said to themselves last week, Labour can still muster a bit of good old-fashioned derangement. More- over, as John Major himself discovered, it is one thing to float ideas and achieve the satisfaction of interesting journalists on an August afternoon. It is another to adopt and defend them. Somehow the Tories need to pull the plug on Blair, let the water swirl away and see what brand of soft-soap he really is.