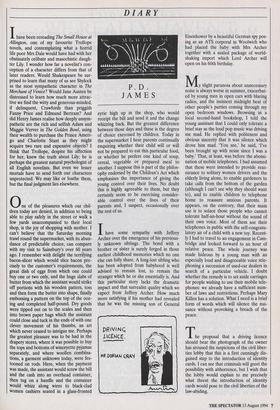 Ihave been rereading The Small House at Allington, one of my favourite Trollope novels, and contemplating what a horrid life poor Mrs Dale would have had with her obstinately celibate and masochistic daugh- ter Lily. I wonder how far a novelist's con- ception of a character differs from that of later readers. Would Shakespeare be sur- prised to learn that many of us see Shylock as the most sympathetic character in The Merchant of Venice? Would Jane Austen be distressed to learn how much more attrac- tive we find the witty and generous-minded, if delinquent, Crawfords than priggish Fanny Price and Edmund Bertram? And did Henry James realise how deeply unsym- pathetic are the rich and selfish Adam and Maggie Verver in The Golden Bowl, using their wealth to purchase the Prince Ameri- go and Charlotte Stant as they might acquire two rare and expensive objects? I think that Trollope, despite his affection for her, knew the truth about Lily; he is perhaps the greatest natural psychologist of all English novelists. But even we lesser mortals have to send forth our characters unprotected. We may like or loathe them, but the final judgment lies elsewhere.

0 ne of the pleasures which our chil- dren today are denied, in addition to being able to play safely in the street or walk a few yards unaccompanied to their local shop, is the joy of shopping with mother. I can't believe that the Saturday morning trawl round the supermarket, with its abun- dance of predictable choice, can compare with my visit to Sainsbury's over 60 years ago. I remember with delight the terrifying bacon-slicer which would slice bacon pre- cisely to the customer's requirements, the great dish of eggs from which one could buy one or two only, and the huge slabs of butter from which the assistant would strike off portions with his wooden patters, toss and then form the butter into shape, finally embossing a pattern on the top of the ooz- ing and completed half-pound. Dry goods were tipped out on to the scales and then into brown paper bags which the assistant could close and tuck in the ends of with one clever movement of his thumbs, an art which never ceased to intrigue me. Perhaps the greatest pleasure was to be had in the drapery stores, where it was possible to buy the tops and bottoms of winceyette pyjamas separately, and where woollen combina- tions, a garment unknown today, were fes- tooned on rods. Here, when the payment was made, the assistant would screw the bill and the cash into an overhead container, then tug on a handle and the container would whizz along wires to black-clad women cashiers seated in a glass-fronted eyrie high up in the shop, who would receipt the bill and send it and the change whizzing back. But the greatest difference between those days and these is the degree of choice exercised by children. Today in the supermarket I hear parents continually enquiring whether their child will or will not be prepared to eat this particular food, or whether he prefers one kind of soup, cereal, vegetable or prepared meal to another. I suppose this is part of the philos- ophy endorsed by the Children's Act which emphasises the importance of giving the young control over their lives. No doubt this is highly agreeable to them, but they certainly seem to be exercising consider- able control over the lives of their parents and, I suspect, occasionally over the rest of us.

Ihave some sympathy with Jeffrey Archer over the emergence of his previous- ly unknown siblings. The bond with a brother or sister is surely forged in those earliest childhood memories which no one else can fully share. A long-lost sibling who has been adopted from babyhood is well advised to remain lost, to remain the stranger which he or she essentially is. And this particular story lacks the dramatic impact and that surrealist quality which we expect from Jeffrey Archer. How much more satisfying if his mother had revealed that he was the missing son of General Eisenhower by a beautiful German spy pos- ing as an ATS corporal in Woolwich who had placed the baby with Mrs Archer together with a sealed package of world- shaking import which Lord Archer will open on his 60th birthday.

My slight paranoia about unnecessary noise is always worse in summer, exacerbat- ed by young men in open cars with blaring radios, and the insistent midnight beat of other people's parties coming through my open bedroom windows. Browsing in a local second-hand bookshop, I told the young assistant that I could only tolerate a brief stay as the loud pop music was driving me mad. He replied with politeness and obvious sincerity that it was silence which drove him mad. 'You see,' he said, 'I've been brought up with noise since I was a baby.' That, at least, was before the abomi- nation of mobile telephones. I had assumed that these were intended to provide reas- surance to solitary women drivers and the elderly living alone, to enable gardeners to take calls from the bottom of the garden (although I can't see why they should want to), and to enable children to telephone home to reassure anxious parents. It appears, on the contrary, that their main use is to solace those people who cannot tolerate half-an-hour without the sound of their own voice. Most of them use their telephones in public with the self-congratu- latory air of a child with a new toy. Recent- ly I had to travel to an engagement in Cam- bridge and looked forward to an hour of relative peace. The whole journey was made hideous by a young man with an especially loud and disagreeable voice tele- phoning a succession of used-car dealers in search of a particular vehicle. I doubt whether the remedy is to set aside carriages for people wishing to use their mobile tele- phones: we already have a sufficient num- ber of laws and restrictions. Perhaps Mary Killen has a solution. What I need is a brief form of words which will silence the nui- sance without provoking a breach of the peace.

The proposal that a driving licence should bear the photograph of the owner has aroused the suspicions of the civil liber- ties lobby that this is a first cunningly dis- guised step to the introduction of identity cards. I can see that criminals will greet the possibility with abhorrence, but I wish that the lobby would explain to me precisely what threat the introduction of identity cards would pose to the civil liberties of the law-abiding.