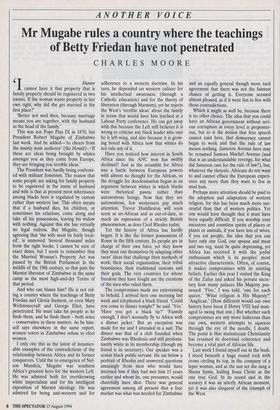 IHarare cannot have it that property that is family property should be registered in two names. If the woman wants property in her own right, why did she get married in the first place?'

`Better not wed then, because marriage means you are together, with the husband as the head of the family.'

This was not Pope Pius IX in 1870, but President Robert Mugabe of Zimbabwe last week. And he added—`to cheers from the mainly male audience' (the Herald)—' ff these are ideas being brought by whites amongst you as they come from Europe, they are bringing you terrible ideas.'

The President was hardly being confront- ed with militant feminism. The reason that some people are asking for family property to be registered in the name of husband and wife is that at present most inheritance among blacks here is regulated by custom rather than western law. This often means that if a husband dies, his children, or sometimes his relations, come along and take all his possessions, leaving his widow with nothing. Against this she has virtually no legal redress. But Mugabe, though agreeing that 'the wife must be fairly treat- ed', is unmoved. Several thousand miles from the right books, I cannot be sure of exact dates, but I seem to remember that the Married Woman's Property Act was passed by the British Parliament in the middle of the 19th century, so that puts the Marxist liberator of Zimbabwe in the same camp as the most high-and-dry Tories of that period.

And who can blame him? He is not rul- ing a country where the teachings of Betty Friedan and Gloria Steinem, or even Mary Wollstonecraft and George Eliot, have penetrated. He must take his people as he finds them, and he finds them – both sexes – conservative in these matters. As he him- self says elsewhere in the same report, women voters in Zimbabwe refuse to elect women.

I only cite this as the latest of innumer- able examples of the contradictions of the relationship between Africa and its former conquerors. Until the re-emergence of Nel- son Mandela, Mugabe was southern Africa's greatest hero for the western Left. He was admired both for overthrowing white imperialism and for his intelligent exposition of Marxist ideology. He was admired for being anti-western and for adherence to a western doctrine. In his turn, he depended on western culture for his intellectual awareness (through a Catholic education) and for the theory of liberation (through Marxism), yet he rejects the West's 'terrible ideas' about the family in terms that would have him lynched at a Labour Party conference. He can get away with this because the Left still believes it is wrong to criticise any black leader who says he is left-wing, and also because it is grow- ing bored with Africa now that whites do not rule any of it.

Have you noticed how interest in South Africa since the ANC won has swiftly declined? Just as the scramble for Africa was a battle between European powers with almost no thought for the African, so the struggle for decolonisation began as an argument between whites in which blacks were rhetorical pawns rather than autonomous beings. Now that they are autonomous, few westerners pay much attention. Trevor Huddleston will soon seem as un-African and as out-of-date, as much an expression of a strictly British phenomenon, as does Cecil Rhodes today. Yet the history of Africa has hardly begun. It is like the former possessions of Rome in the fifth century. Its people are in charge of their own fates, yet they know they must run themselves by adapting other races' ideas that challenge their methods of work, their social organisation, their tribal boundaries, their traditional customs and their gods. The very countries for whose freedom they have fought are the creations of the men who ruled them.

The compromises made are entertaining to behold. I arrived here one morning last week and telephoned a black friend. 'Could you come to dinner tonight?' he said. 'Yes.' `Have you got a black tie?' Funnily enough, I don't normally fly to Africa with a dinner jacket.' But an exception was made for me and I attended in a suit. The dinner was that of a club founded when Zimbabwe was Rhodesia and still predomi- nantly white in its membership (though my friend is its secretary). Our speaker was a senior black public servant. He sat below a portrait of Rhodes and answered questions amusingly from men who would have interned him if they had met him 15 years earlier and whom he, one presumes, would cheerfully have shot. There was general agreement among all present that a free market was what was needed for Zimbabwe and an equally general though more tacit agreement that there was not the faintest chance of getting it. Everyone seemed almost pleased, as if it were fun to live with these contradictions.

Which it might as well be, because there is no other choice. The idea that you could have an African government without seri- ous corruption at every level is preposter- ous, but so is the notion that free speech cannot exist here, that democracy cannot begin to work and that the rule of law means nothing. Jameson Avenue here may be renamed Samora Machel Avenue (and that is an understandable revenge, for what did Jameson care for the rule of law?), but, whatever the rhetoric, Africans do not want to and cannot efface the European experi- ence any more than they want to live in mud huts.

Perhaps more attention should be paid to the adoption and adaptation of western religion, for this has been much more suc- cessful than that of western politics. Yet one would have thought that it must have been equally difficult. If you worship your ancestors and countless spirits of places or plants or animals, if you have lots of wives, if you eat people, the idea that you can have only one God, one spouse and meat and two veg. must be quite depressing, yet Africa has received it with the joyful enthusiasm which is its peoples' most attractive characteristic. Often, of course, it makes compromises with its existing beliefs. Earlier this year I visited the King of the Zulus and asked his private secre- tary how many palaces His Majesty pos- sessed. 'Five,' I was told, 'one for each queen.' What religion is His Majesty?' `Anglican.' (How different would our own history have been if Henry VIII had man- aged to swing that one.) But whether such compromises are any more ludicrous than our own, western attempts to squeeze through the eye of the needle, I doubt. The point is that mainstream Christianity has retained its doctrinal coherence and become a vital part of African life.

Last week I found myself out in the bush. I stood beneath a huge round rock with crows circling its top, in the company of a leper woman, and as the sun set she sang a Shona hymn, hailing Jesus Christ as the one true God. In its sound and in the scenery it was an utterly African moment, yet it was also eloquent of the triumph of the West.