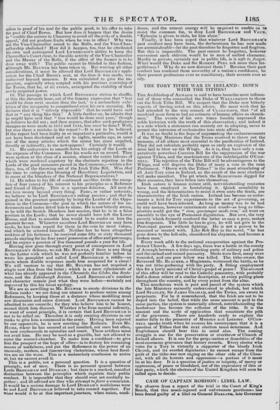 THE TORY TITHE WAR IN IRELAND: DOWN WITH THE TITHES!

THE Archbishop of ARMAGH is said to have been the most influen- tial of those who counselled the Duke of WELLINGTON to throw out the Irish Tithe Bill. We suspect that the Duke now bitterly repents of having acted on this advice. He must wish that he had attended to the wise remark of CLARENDON, that "of all mankind none form so bad an estimate of human affairs as church- men." The events of his own times forcibly impressed the noble historian with the truth of this observation; and indeed it is a rule which a statesman can scarcely err in adopting, never to permit the intrusion of ecclesiastics into state affairs.

It was no doubt in the hope of augmenting the embarrassments of the Whig Ministers that the Tories resolved to throw out the measure, of all others most essential to the pacification of Ireland. They did not calculate probably upon so early an explosion of the mine laid to blow up the Whigs. As it is, they have only a corn paratively powerless Coercion Bill for the suppression of the war against Tithes, and the machinations of the indefatigable O'Corr- NELL. The rejection of the Tithe Bill will be advantageous to the Whigs, and will deprive the Duke of many a vote in the next Parliament. "Down with the Tithes ! "is the most stimulating of all Anti-Tory cries in Ireland, as the result of the next elections will make manifest. The pit which the BERESFORDS digged for their enemies, they have fallen into themselves.

Irish nature is human nature still, notwithstanding centuries have been employed in brutalizing it. Quick sensibility to wrong, and the determination to resist it even unto the death, are characteristics of the Irish nation. Ireland has become as unfor- tunate a field for Tory experiments in the art of governing, as could well have been selected. As long as money was to he had by any means, however extortionate and cruel—as long as tithe- proctors could get the " rem, quocunque modo rem," all went on smoothly to the eye of Protestant dignitaries. But now, the very poverty which formerly rendered the latter so easy a prey, makes him desperate. The little he has to give, he will not give to the Protestant parson without fighting. He is not a person to be reasoned or treated with. Like Rob Roy in the novel, "he has gone down to the hill-side, shouldered his claymore, and become a broken man."

Every week adds to the national exasperation against the Pro- testant Church. A few days ago, there was a battle in the county of Armagh between a tithe-collecting party of military and police and the racked and ruined peasantry. Shots were fired, many were wounded, and one poor fellow was killed. The tithe-owner, the Reverend Mr. BLACKER, a Magistrate, witnessed the battle, as he was out tithe-gathering with the party. A fitting employment this for a lowly minister of Christ's gospel of peace ! The account of this affair will be read to the Catholic peasantry, with probably half-a-dozen others of a similar description, at every polling-place throughout the country, and by every priest from the altar.

This murderous work is part and parcel of the system which the late Ministers earnestly endeavoured to abolish, but which Lord STANLEY, Sir JAMES GRAHAM, and the Tories, are sworn to perpetuate. For be it remembered, that the Irish are not to be duped into the belief, that while the same amount is paid to the same parties, the system is materially altered, notwithstanding the landowner has become the collector of the tithe. It is the amount and the mode of application that constitute the pith of the grievance. There are hundreds ready to explain the matter fully to the peasantry of Munster and Leinster. °Vox- NELL speaks truth when he assures his countrymen that it is a question of Tithes that the next election must determine. And Englishmen should bear this in mind also. The coming struggle is one for the preservation or overthrow of Church of Ireland abuses. It is one for the perpetuation or demolition of the most enormous grievance that history records. Every elector who votes for a Tory is virtually a supporter of the bloody Irish Church, and its overfed dignitaries: he cannot escape from the guilt of the tithe-war now raging on the other side of the Chan- nel, with all its horrors and oppression—a portion of it must lie at his door. It is a question of justice or iniquity, of mercy or oppression, of peace or bloodshed, not of the supremacy of this or that party, which the electors of the United Kingdom will soon be called upon to decide.