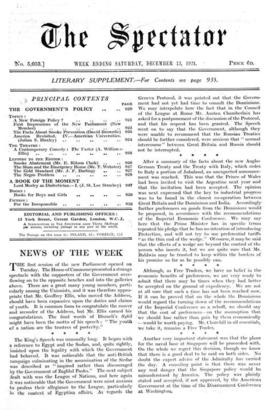 THE first session of the new Parliament opened on Tuesday. The House of Commons presented a strange spectacle with the supporters of the Government over- flowing on to the opposite benches and into the galleries above. There are a great many young members, parti- cularly among the Unionists, and it was therefore appro- priate that Mr. Geoffrey Ellis, who moved the Address, should have been expansive upon the duties and claims of youth. It is common form to congratulate the mover and seconder of the Address, but Mr. Ellis earned his congratulations. The final words of Disraeli's Sybil might have been the motto of his speech : " The youth of a nation are the trustees of posterity."