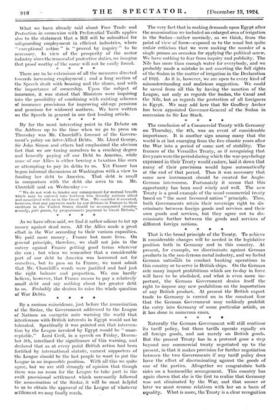 That is the broad principle of the Treaty. To achieve

it considerable changes will be needed in the legislative position both in Germany and in this country. At present, for example, we discriminate against German products in the non-ferrous metal industry, and we forbid German nationals to conduct banking operations in this country or to serve in British ships. On the German side many import prohibitions which are to-day in force will have to be abolished, and what is even more im- portant, the German Government denies itself. the right to impose any new prohibition on the importation of any British product. At present the British export trade to Germany is carried on in the constant fear that the German Government may suddenly prohibit the entry into Germany of some particular article, as it has done in numerous cases.