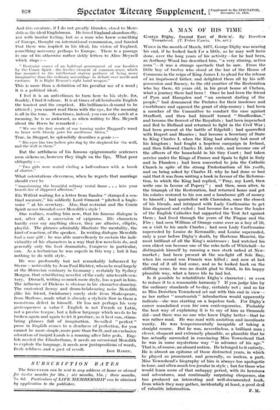 George Digby, Second _ Earl of Eris' 01. By Dorothea Townshend. (T. Fisher Unwin. 15s. net.) WREN in the month of March, 1677, George Digby was nearing ' hiS end, if he iooked back fir a little, as he-may well- hate done, over the long years of his activity—for he had been, as Anthony-Wood has described him, "a very stirring, active man "—it was a strange spectacle that he saw. From the little boy of twelve who stood at the bar of the House of Commons in the reign of King James I. to plead for the release of an imprisoned father, and delighted them all by his self- possession and fluency, to the old courtier of the Restoration who lay there, 65 years old, in his great house at Chelsea, what a journey there had been ! Once he had been the friend of Pym and Hampden and " an eminent darling of the people," had denounced the Prelates for their insolence and exorbitance and opposed the grant of ship-money ; had been a member of the Committee to conduct the case against Strafford, and then had himself turned " Strafforclian," and become the fiercest of the Royalists ; had been impeached and fled to Holland and returned to fight in the Civil War ; had been present at the battle of Edgehill ; had quarrelled with Rupert and Maurice ; had become a Secretary of State to King Charles I. when the King had already lost most of his kingdom ; had fought a hopeless campaign in Ireland, and then followed Charles II. into exile, and become one of the officers of the household in his tiny Court ; had taken service under the Kings of France and Spain to fight in Italy and in Flanders ; had been converted to join the Catholic Church in spite of the strong Protestantism of his youth, and on being asked by Charles II. why he had done so had said that it was from-writing a book in favour of the Reforms- • tion, to which the King had replied, " Pray, my Lord, then write one in favour of Popery" ; and then, soon after, in the triumph of the Restoration, had returned home and got his estates restored to his son and a handsome gift of money to himself ; had quarrelled with Clarendon, once the closest of his friends, and intrigued with Lady Castlemaine to get him disgraced and exiled ; had become for a time the leader of the English Catholics but supported the Test Act against them ; had lived through the years of the Plague and the Fire ; had seen William of Orange come over as a bOy of 20, on a visit to his uncle Charles ; had seen Lady. Castlemaine superseded by Louise de Keronaille, and Louise superseded, only a year before Digby's death, by Hortense Mancini, the most brilliant of all the King's mistresses ; had watched his own eldest son become one of the rake-hells of Whitehall—to distinguish himself by running a race stark naked at New- market ; had been present at the sea-fight off Sole Bay, when his second son Francis was killed ; and now at last the end of it all had come, and as he looked back on the shifting scene, he was no doubt glad to think, in his happy plausible way, what a brave life he had led.

Is it possible to rehabilitate Digby's character ; or even to reduce it to a reasonable harmony ? If you judge him by the ordinary standards of to-day, certainly not ; and so far as Miss Dorothea Townshend set out with this end in view— as her rather " amateurish " introduction would apparently indicate—she was starting on a hopeless task. For Digby's career scandalized even his own contemporaries. Probably the best way of explaining it is to say of him as Ormonde did—and there was no one who knew Digby better—that he was rather mad. He was mad with ambition and inordinate vanity. He was temperamentally incapable of taking a straight course. But he was, nevertheless, a brilliant man ; clever, eloquent and extremely plausible, so plausible that he has actually succeeded in convincing Miss Townshend that he was in some mysterious way " in advance of his age." That is, of course, an absurd notion. He belonged to it entirely. He is almost an epitome of those distracted years, in which he played so prominent, and generally, so useless, a part. Miss Townshend's biography of him is always too apologetic in tone, and often much too jocular in style ; but for those who would learn more of that unhappy period, with its heroisms and adventures, and continually surprising eloquence, she has produced an interesting and well-documented honk, from which they may gather, incidentally at least, a good deal of ialuable information.