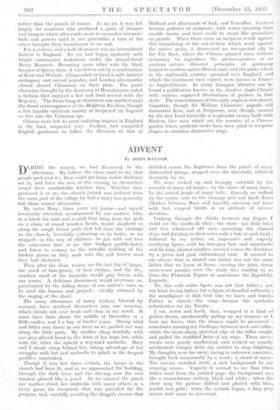 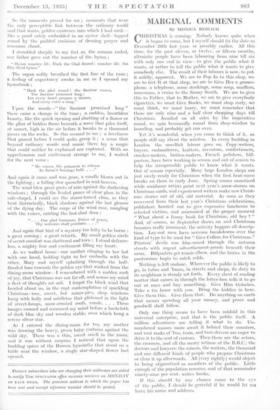 ,DURING the winter, we had Evensong in the afternoon. •My father, the vicar, used to say that .people preferred it ; they could get home before darkness set in, and have the rest of the evening to themselves round their- comfortable kitchen fires. Whether they preferred it or no, the church (which was isolated from the main part of the village by half a mile) was generally full these winter afternoons.

. My sister Mary—three years my junior—and myself invariably attended,' accompanied by our mother, who, in a black fur coat -and a muff that hung from her neck on a chain of round, wooden beads, would shepherd us along the rough frozen path that led from the vicarage to the church; feVerishly exhorting us to hurry, as we stopped—in the way of children—to jab with nur toes the criss-cross bars of ice that bridged puddle-holes, and listen in ecstasy to the metallic tinkling of the broken pieces as they sank into the soft brown mud they had sheltered.

. Then after the clear, wintry air the hot fog of lamps; the smell of hair-grease, of best clothes, and the dry, sawdust smell of the hassocks would play havoc. with our senses. A delicicius drowsiness would overcome us; punctuated by the lulling drone of our father's voice as he read the lessons and prayed ; vividly coloured by the singing of the choir: The many afternoons of many winters, blurred by memory have resolved themselves into one occasion, which stands out ever fresh and clear, in my mind. It Must have been about the middle. of December or a little earlier, and I a boy of twelve years. , Strong wind and bitter rain drove in our faces as we pushed our way along the little path; • My mother clung fearfully with one grey-gloved hand to the brim of her large hat, while with the other she upheld a wayward umbrella. Mary and I strode along behind her, taking advantage of her struggles with hat and umbrella to splash in the deepest puddles; unrebuked.

Though it was but three o'clock, the .lamps in the church had been lit, and as we approached the building, through the dark trees , and the driving. rain the east- . window glowed like a jewel. As we .entered the porch our mother stood her umbrella with many others in a rusty green tin receptacle that was , provided for the purpose, and, carefully avoiding the sluggish stream that dribbled across the flagstones from the points of many dishevelled gamps, stepped over the threshold, followed demurely by us.

We were sucked up and lovingly enfolded by, the warmth of many oil lamps ; by the stares or many faces ; by the muted jangle of many bells. Gravely we walked up the centre aisle '-to the vicarage pew and knelt down (Mother between Mary and myself), covering our faces with hot, cupped hands in an attitude of intense devotion.

Looking through the chinks between my fingers I could see the candle-lit altar ; the choir—ten little boys and five whiskered old men—mounting the chancel steps and dividing to their seats with a bob of -each head ; followed. by my father, an impressive and vaguely terrifying figure, with his iron-grey hair and moustache and his long, pleated surplice, covered across the shoulders by a green and pink embroidered stole. It seemed to me always that in church our father was not the same. father that • we knew at home—carving the joint, doing cross-word puzzles over the study fire, reading to 118, from the Pickwick Papers or sometimes the ,Ingoldsby, Legends. , No, this cold white figure was not that father ; not our kind, loving father, but ci.figure of dreadful authority the mouthpiece of that, God who we knew and feared.) Father in church—the vicar—became- the symbolio substitution for the Trinity. .

I sat, stood and knelt, then, wrapped in , a kind of golden dream, mechanically piffling up my trousers as I. bent my knees, that the creases might be preserved—r sometimes running my forefinger between neck and collar, where the razor-sharp, starched edge of the collar caught and pulled the stubbled hairs of my nape. These move- ments were purely mechanical, and evoked an equally mechanical whisper from my mother to stop fidgeting, My thoughts were far• away, • racing in unknown countries,, brought back occasionally by a word ; a chord of music. The service unrolled itself, a rich background to my straying senses. Vaguely it seemed to me that when father read from the. printed page, the background was like a monochrome etching, black and white ; when the choir sang the picture shifted and glinted with blue, scarlet and gold .; when the sermon, began, a long grey winter field must be traversed. So the moments passed for me ; ,moments that were thC only perceptible link between the ordinary World and that warm, golden existence into which I had sunk— like a pearl safely embedded in an Oster shell—lapped round by the padded cushiOns of droning prayer and sensuous chant.

I stumbled sleepily to my feet as, the sermon ended, ' our father gave out the number of the hymn : " Hymn number 53 : Hark the Glad Sound: number 53: the fifty-third hymn."

The organ softly breathed the first line of the. tune ; feeling 'of expectancy awoke in me as I opened my hymnbook ';

" Hark the glad sound 1 'the Saviour comes, The Saviour promised long: Let every heart prepare a throne, And every voice a song."

Upon the words—" the Saviour promised long " there came a change in the tune; a. sudden, breathless' beauty, like the quick opening and shutting of a flower or the glint of hidden flame beneath a" wave that piles itself, at sunset, high in the air before it breaks to a thOusand pieces on the rocks. So this seemed to me ; a loveliness that passed before I could quite grasp it ; a sense that beyond ordinary words and music there lay a magic that could neither be explained nor captured. With an apprehension and excitement strange to me, I waited for the next verse :

" Ho comes, the prisonets to release In Satan's bondage held. . ."

And again it came and was gone, a candle blown out in the lighting ; a falling star quenched in mid-heaven. The wind blew great gusts of rain against the darkening windows ; through the leaded panes of clear glass in the side-chapel, I could sec the storm-tossed elms, as they bent distractedly, black shadows against the last gleams of the dying day. The surge of the wind rose, mingling with the voices, rattling the fast-shut door ; " . . Our glad hosannas, Prince of peace, 'Thy welcome shall proclaim, . . ."

And again that hint of a mystery too lofty to be borne : a great coming : a great rebirth. My small golden circle of secret comfort was shattered and torn ; I stood defence, less, a mighty .fear and excitement filling my heart.

As we walked lioniceur mother clinging to her hat with one hand, holding tight to 'her umbrella with the other, Mary and myself splashing through the half- flooded lane towards the golden eye that winked frOm the dining-room window—I remembered with a sudden rush of joy, that Christmas was not far off, and across my mind a fleet of thought's set sail. I forgot the black wind that hoWled about us, in the rapt Contemplation of sparkling Christmas - tree, sweet, hot mince pies, shop windows filing' with holly and mistletoe that glistened in the light of street-lamps, snow-crusted' roofs, carols. . . . These images crossed and recrossed my mind before a backcloth of dark blue sky and wooden Stable, over which hung a serene silver star.

"AS I entered the dining-room for 'tea, my mother 'Was drawing the heavy, 'green baize curtains 'against the wild sky, There Was a thin, 'sweet smell in the' 'rooni, and it • was without surprise I 'noticed that upon the budding spires of the Reman hyacinths' that stood on a table near the window, a. single star-shaped flower had opened.