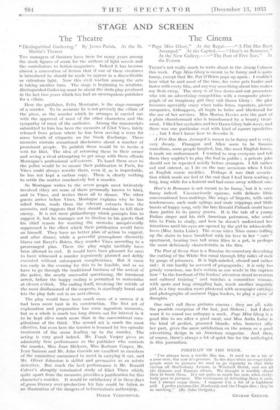 "Distinguished Gathering." By James Parish. At the St. Martin's Theatre Tim managers of theatres have been for many years among the stock figures of scorn for the 'atithors of light novels and the contributors to fiction-magazines. Indeed it has become almost a convention of fiction that if one of these creatures 'is 'introduced he ShoUld be'made to. appear in a discreditable or ridiculous light. Now this civil warfare among the arts is taking 'another turn. The stage is beginning to retaliate. Distinguished Gathering must be about the sixth play produced in the last two years which has had an unserupillous publisher for a villain.

Here the publisher, Felix Montague, is the stage-manager of a murder. To be accurate lie is not precisely the villain of the piece, as the murder which he arranges is- carried Out with the approval of most of the • other characters and the sympathy of most of the audience. Among the manuscripts submitted to hini has been the memoirs of Eliot Vines, lately released from prison where' he has been serving 'a term for some breach of etiquette on the Stock Exchange. These Memoirs contain sensational disclosures about a number of prominent people. To publish them would be to invite a writ for libel. The idea of returning them to their owner and seeing a rival attempting to get away with them offends Montague's professional self-esteeth. To hand them over to the police would be to ensure their publication in Paris, for Vines could always rewrite them, even if, as is improbable, he has net kept a carbon copy. • There is clearly nothing to settle the matter conclusively but a murder.

So Montague writes to the seven people most intimately involved (they are none of them personally known to him), and to Vines, and invites them all to dinner. The other guests arrive before Vines, Montague explains why he has asked them, reads them the relevant extracts from the memoirs, and suggests that they should combine to kill their enemy. It is not mere philanthropy which prompts him to suggest it, but he manages not to disclose to his guests that his chief reason for wanting the memoirs' unequivocally suppressed is the effect which their publication would have on himself. They have no better plan of action to suggest, and after dinner, while a powerful gramophone discreetly blares out Ravel's Bolero, they murder Vines according to a prearranged plan. There the play might tactfully have been allowed to end. It would have been pleasant for once to have witnessed a murder ingeniously planned and deftly executed without subsequent complications. But it came too early in the evening for this to be feasible, and so we have to go through the traditional business of the arrival of the police, the nearly successful questioning, the imminent arrest, before the happy ending is permitted to materialise at eleven o'clock. The ending itself, involving the suicide of the most disillusioned of, the suspects, is startlingly banal and lets the play fade out in an anti-climax.

The play would have been much more of a success if it had been more taut in its construction. The first act of explanation and preparation has some ingenious moments, but as a whole is much too long drawn out Tor interest in it to be kept alive much. more than in the conventional com- plications of the third. The second act is much the most effective, but even here the tension is lessened by too episodic treatment of the scene , leading, up to the murder. The acting is very good indeed.. Mr. Frank Vesper gives an admirably firm performance as the publisher who controls the murder, Miss Joan Hickson, , Miss .Barbara Cooper,, Mr. Ivan Samson and Mr. John Garside are excellent as members of the committee summoned to assist in ,carrying it out, and Mr. Oliver Johnston is skilful and persuasive as an astute detective. But much the best- performance is Mr. Ronald :Culver's• abruptly. terminated study of Eliot Vines which, 'quite apart from the memoirs, provides .ft justificationtersthis character's murder. It would be satisfactory if in these days saf,gross literary over-productjon his, fate could be taken. as an illustration of the dangers of indiscriminate, authorship, DEREK VenscnoYLE.