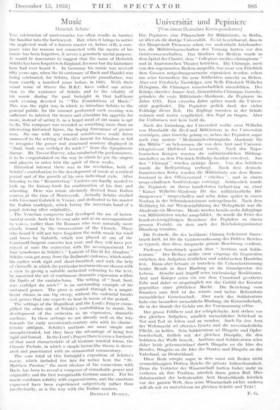 Tire celebration of anniversaries too often results in turnin7 the familiar into the hackneyed. But, when it brings to notice the liegleeted work of a known master or, better still, a,corn- poser who for reasons not connected with the merits of his music has been forgotten, it serves a genuinely useful purpose. It would be inaccurate to suggest that the name of Heinrich Schutz has been forgotten in England, for none but the historians here had ever heard it. In Germany his music was revived fifty years ago, when the bi-centenary of Bach and Handel was being celebrated, for Schutz, their artistic grandfather, was born exactly a hundred years before; in ,1685. With their usual 'sense of fitness the B.B.C. have called our atten- tion to the existence of Sehiltz and to the vitality of his music during the past fortnight in that half-hour each evening devoted to " The Foundations of Music." This Was the right Wfly in which to. introduee Schutz to the general public, for the amount performed each .evening was suffleient to interest the hearer and stimulate his appetite for more, instead of sating it, as a larger meal of old music is apt to AO, The composer was revealed as something more than an interesting historical figure,, the lisping forerunner of greater men. No one with any musical sensitiveness could listen unmoved to the setting of David's lament for Absalom or fail to recognise the power and structural mastery displayed in " Saul, Saul, was veriolgst du mich ?" from the Sympho

Sacnie, Mr. Trevor Harvey, who condtieted the perfortnalices, is to be congratulated on the way in which he got the singers and players to enter into the spirit of these works.

Historical interest there was in the revelation, both of Schiaz's contribution to the development of music ata critical period and of the growth of his own individual style. After listening to the "Resurrection" Cantata one hardly needed to look up the history-book for confirmation of 'his date and schooling. Here was music obviously. derived, from Italian sources* the time of Monteverdi. Actually Schultz studied with .Giovanni Gabrieli in Venice, and dedicated to his master • the Italian madrigals, which betray the uncertain hand of a pupil st riving after originality.

The Venetian composers had developed the use of instru- mental music, both for its own sake and as an accompaniment to voices, earlier than the. Romans who were naturally more closely:hotrod by the conservatism , of the Church. Those who heard it will not have forgotten the noble music for wind and brass by Gabrieli, which was. played at one of the Courtauld-Sargent concerts last year, and they will have per- eeiyed at once the connexion with. the accompaniment for four trombones in Schiltes ." Lament of David for Absalom." Schutz soon got away from the It alianate cadences, which make Iris earlier work rigid and short-breathed, and with the help of iihar net , in which the particular instruments are chosen with yie'v tai giving a suitable orchestral colouring to the text, Sae mast ered the art of continuous dramatic expression within the limit s of the cantata-form. The setting of " Saul, Saul, was verfolgst du midi?" is an outstanding example of his ,iestnticd power. The piece is carried through to a magai_ elitnax in one big sweep, without the cadential. breaks :IA pauses that one expects to hear in music of the period. The settings 'of the Magnificat and the Lord's Prayer exem- plified the other side of Schtiti's contribution to music, his deVeloptiient of the Orchestra as an expressive; draniatic ineillino. In these settings we are already Well on the .way towards the early seventeenth-century aria with its charac- teristic obbligato. Schiitz's methods are more simple and unsophisticated, but they have the advantage of being less rigid and formal. In the Lord's'Prayer there is even a foretaste of that most ehaructcrisI ic of all German musical forms, the Chorale Prelude, in which a simple hymn-like theme is decor- ated and punctuated with an ornamental commentary.

'lite stun total of this fortnight's exposition of Sehiftz's music, which included too late for notice here the " St. Matthew Passion," the most obvious of his connexions with Bach, has been to reveal a composer of remarkable power and originality and the first recognizable German master. For his music combines solidity with expressiveness, and the' emotions expressed have been experienced subjectively rather than intellectually, as is the way with the Italian masters.