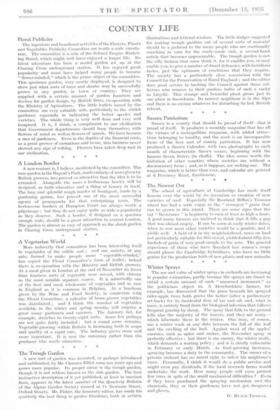 Page 16, 13 December 1935 — A new sort of garden was invented, or perhaps introduced
Close

A new sort of garden was invented, or perhaps introduced

and sublimated, by Mr. Clarence Elliot some ten years ago and grows more popular. Its proper name is the trough garden, though it is not seldom known as the sink garden. The best. instructive description of it yet published, at least in succinct form, appears in the latest number of the Quarterly Bulletin, of the Alpine Garden Society (issued at 71 Newman Street, Oxford Street). Mr. Fisher, the honorary editor, has made his quarterly the best thing in garden literature, both in artistic illustrations and lettered wisdom. The little dodges suggested for making trough gardens out of several sorts of material should be a godsend to the many people who arc continually searching in vain for-the ready-made sink,: a second-hand article that becomes unprocurable. The trough garden is not the silly fashion that some think it, for it enables you, or may enable you, to give a number of dwarf delicacies, with fastidioua tastes, just the optiMum of conditions that they require. The society has a particularly close association with the Council for the PreSerVation of Rural England ; and the editor does good service in backing the Council against those col- lectors who remove to their gardens bulbs of such a rarity as Lloydii. This strange and beautiful plant grows just in one place in Snowdonia. Its nearest neighbour is in the Alps and there is no excuse whatever for disturbing its last British retreat. • * * * *