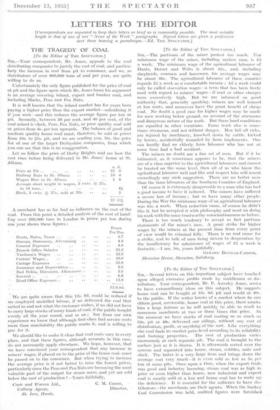 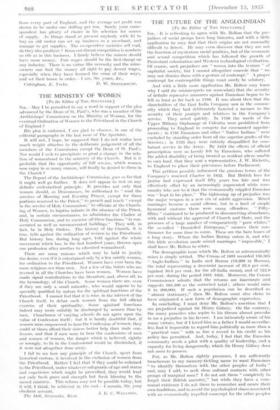 [To the Editor of THE SPECTATOR.] Sin,—Several letters on this

important subject have touched ,,pan alleged excessive profits made by middlemen'. or dis- tributors. Your correspondent, Mr. P. Asterley Jones, seems to have extraordinary ideas on this subject. He suggests house coal can be bought at 13s. 6d. Pit and resold 'at 40s. to the public. If the writer knows of a market where he can obtain good, serviceable, house coal at this price, there awaits him 'a large fortune as he Will quickly be able to resell to numerous merchants at two or three times this' price. At the moment we have stocks of coal costing us as much as 34s. pit or 40s. delivered our sidings, without any cost of distribution, profit, or anything of the sort. Like everything else coal finds its market price-level according to its reliability and burning properties. The cost of . production varies enormously at each separate pit. The coal is brought to the surface just as it is drawn. It is afterwards sorted over the screens and separated into house, steam, .cobbles, nuts and slack. The latter is a very large item and brings down the average cost very much—it is even sold as low as 5s. per ton at some pits. Once upon a time, when the export trade. was good and -industry booming, steam coal was as high in price or even higher. than house, now industrial and export coal is mostly sold at a loss and house coal has to make up the deficiency. , It is essential for the collieries to have dis- tiibutors---the merchants are their agents. When the Sankey Coal Commission was held, audited figures were furnished from every part of England, and the average net profit was shown to be under one shilling per ton. Surely your core- spondent has plenty of choice in his selection. for source of supply. As things stand at present anybody with '£5 to buy an old motor can set tip business as a merchant, and manage to get supplies. The co-operative societies sell coal, do they also profiteer ? Keen cut-throat competition is nowhere so rife as in this business. I firiuly believe the Miners should have more money. Fair wages should be the first charge on any industry. There is no virtue like necessity and the mine- owners can find the money all right to pay decent' wages, especially when they have learned the error of their ways, and set their house in order.—I ant, Sir, yours, &c.,