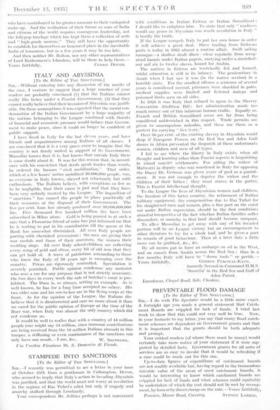 [To the Editor of 'I'nE SPECTATOR.]

SIR,—Without entering into any discussion of the merits of the case, I venture to suggest that a large number of your readers are probably convinced (1) that the Italians cannot really like being under a Fascist Government, (2) that they cannot really believe that their invasion of Abyssinia was justifi- able: On these assumptions it was expected that the moral con- demnation of the Italian Government by a large majority of the nations belonging to the League combined with threats of financial and economic pressure would induce that Govern- ment to make peace, since it could no longer be confident of public support.

I have lived in Italy for the last eleven years, and have friends and acquaintances among Italians of all classes. I am convinced that it is a very grave error to imagine that the country is not firmly united in support of its Government. Mussolini knows that it is, but knows that outside Italy there is some doubt about it. It was for this reason that, in accord- ance with his conviction that deeds speak louder than words, Ire ordered the famous " civil mobilization." That order, which at a few hours' notice mobilized 20,000,000 people, was, as everyone in Italy knows, obeyed not reluctantly but with enthusiasm. The Italians believe, with exceptions so few as to be negligible, that their cause is just and that they have been very unfairly treated by the League. The imposition of " sanctions " has caused the people to place practically all their resources at the disposal of. their Government. The five per cent. loan has already produced over 80,000,000,000 lire. Five thousand five hundred million lire have been subscribed in Milan alone. Gold is being poured in at such a rate that a Florentine friend of mine has just informed Inc that he is waiting to put in his contribution till the queue at the Bank has somewhat diminished. All over Italy people are parting with cherished possessions ; the men are giving their war medals and those of their ancestors, the women their wedding rings. All over Italy school-children are collecting every scrap of gold and silver, every bit of old iron that they can get hold of. A wave of patriotism astounding to those who knew the Italy . of .20 years ago is sweeping over the country. Prices are rigorously controlled. Speculation is severely punished, • Public , opinion condemns any motorist who uses a car for any purpose that is not strictly necessary. pa two days. in every week the sale of butcher's meat is pro- hibited. The Duce is, as always, .setting an example. As is well known,. he has for a long time accepted no salary. His two elder sons and his son-in-law are in the flying.corps at the front. As for the opinion of the League, the Italians dis- believe that it is disinterested and care no more about it than we cared for the public opinion of Europe atthe time of the Boer war, when Italy was almost the only country which did not . condemn us. •

It would be well to realise that with a country of 44 million people (one might say 54 million, since immense contributions arc being received from the 10 million Italians abroad) in this temper, a stiffening or even continuance of the sanctions can only have one result.-1 am, &e., W. SHEPHERD.