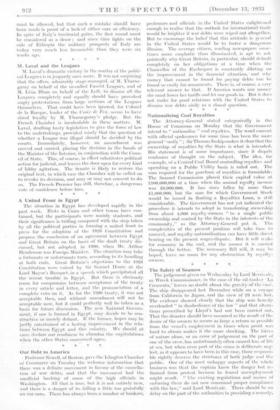 Nationalising Coal Royalties The Attorney-General stated categorically 'in the House

of Commons on Monday that the GOveinment intend to " nationalise " coal royalties. The word current with official spokesmen for some time has been the more general " unify " ; Sir Thomas Inskip makes it clear that the ownership of royalties by the- State is what is intended. His statement is of some importance, since it dispels confusion of thought on the subject. The idea, for example, of a Central Coal Board controlling royalties and • operating on a Public Utility basis is ruled- out. The sum required for the purchase of royalties is formidable. The Samuel Commission placed their capital .value at £100,000,000 at a time when the annual royalty income was £6,000,000. It has since fallen by more than £1,000,000, but the sum for which Government . Stock would be issued in floating a Royalties Loan, is still considerable. The Government has not yet indicated the procedure it intends to adopt in transferring ownership from about 4,000 royalty-owners " to a single public ownership and control by the State in the interests of the community," as the . Attorney-General put ,it. The complexities of- the present position will take time to unravel, and royalty-nationalisation can have little: direct bearing on the present wages-dispute. But it will wake for economy. in the end, and the sooner it is carried through the better. The necessary Bill will,, it m' lie hoped, leave no room for any obstruction -by ro■.:11ty- owners.