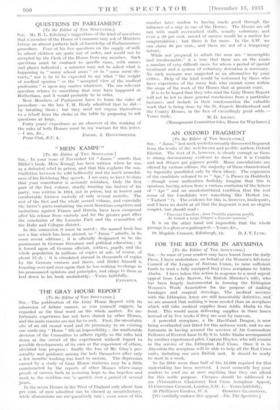 AN OXFORD FRAGMENT [To the Editor of THE SPECTATOR.] Sum ,--"

Janus" last week quoted a recently discovered fragment from the works of the well-known and prolific author, Oxford Elector. The text of it, however, is clearly corrupt as there is strong documentary, evidence to show that it is Crultila and not Stirpes qui pignora perdit. Many emendations are offered by various editors, the majority of them characterised by ingenuity paralleled only by their idiocy. The cognomen: of the candidate referred to as " Ape," is Passer (a Haddock) --though some authorities foolishly imagine that this is spurious, having arisen from a curious confusion bf the letters of " Ape " and an unsubstantiated tradition that the real name of the Candidate was something like Herbot (or, " Turbert " ?). The evidence for this is, however, inadequate, and I have no doubt at all that the fragment is not an elegiac couplet, but should read :

It is on the other hand not impossible that the whole passage is a gloss or a palimpsest.—Yours, &c.,