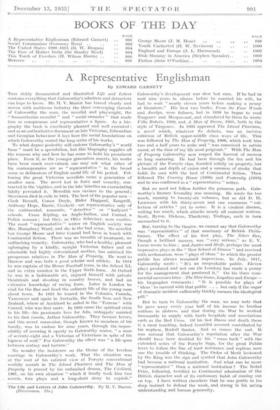 By EDWARD GARNETT ' Tins richly documented and illustrated Life and Letters contains everything that Galsworthy's admirers and detractors can hope to know. Mr. H. V. Marrot has traced clearly and Woven with assiduous industry the three converging threads of Galswirthy the man, the novelist and playwright, the " humanitarian moralist " and " social crusader " that made him so conspicuous and representative a figure. As a bio- graphy the book is excellently planned and well executed : and as an authoritative document on late Victorian, Edwardian and Georgian behaviour it lays bare the social foundations on Which Galsworthy reared the long series of his works. To what degree' Posterity will asadorse Galsworthy'a " world fame " must be a speculation, but this biography supplies all the reasons why and how he has come to hold his prominent place.' Even if, 'ai the younger generation asserts, hiS works have been much over-valued, one may ask what other of his contemporaries are as " representative ". in the broad sense 'as delineators of English social life of his period. Fol- lowing the great Victorian novelists came a generation of sinaller men. The novel lost in force and veracity, con- tracted in the 'eighties, and in the late 'nineties an excruciating falsity perViided it. Meredith was caviare to the general ; Stevenson died in exile in 1894. The best of the popular men-=- Clark Russell, Conan Doyle, Rider Haggard, Zang*ill, Anthony Hope, Barrie, Crockett—are representative only of the sentimental, romantic, " detective " or " kailynrd " schools. Came Kipling, an Anglo-Indian, and Conrad, a Polish seaman ; but they, 'as. Olive Schreiner, were exotics. The most " representative." writer on English: aociety was Mrs. Humphrey Ward, and she in the bad sense. No novelist but George Moore and later Conrad had been. in touch with Continental fiction. There was no breadth of treatment, no unflinching veracity. Galsworthy, who had a healthy, pleasant upbringing by a kindly, upright Victorian father and an admirable but highly conventional mother, has satirised his prosperous relatives in The Man of Property. He went to Harrow and was both a good scholar and athlete. In 1884 he was captain of the House Football team, in the School XI; and an extra monitor in the Upper Sixth form. At Oxford he was in a fashionable set, enjoyed hithself with private theatricali and shooting in country houses, and had an extensive knowledge of racing form. Later in London he road for the Bar and lived the ordinary life of the young man iitiout town. In 1891 he toured in the Colonies, Canada, Vancouver and again in Australia, the South Seas and New Zealand, where at Auckland he sailed in the Torrens with I onrad, who was first mate. In 1895 came the spiritual crisis in his life—his passionate love for Ada, unhappily married to his. first cousin, Arthur Galsworthy. They became lovers, and this secret connexion, though known to members of his family, was' to endure for nine years, through the impos- sibility of avowing it openly to Galsworthy senior, " a man seventy-eight and a Victorian of Victorians in spite of his bigness of soul." For Galsworthy the effect was " a life spun between ecstasy and torture."

No wonder the insistence on the theme of the loveless marriage in Galsworthy's work. That the situation was at the root of his satirical view of Forsyte conventional worldly morals in The Island Pharisees and The Man of Property is proved by his unfinished drama, The Civilised, 1901, on his own situation " which it finally took him two novels, two plays and a long-short story to exploit."

The Life and Letters of John Galsworthy. By H. V. Marrot. (Heinemann. 21s.) Galsworthy's development was slow but sure. If he had to wait nine years in silence before he married his wife, he had to wait nearly eleven years before making a penny at literature." His first' two books, From the Four Winds and Jocelyn, were failures, but in 1898 he began to read. Turgenev and Maupassant, and stimulated by them he wrote Villa Bubein, 1900, and A Man of Devon, 1901, both in tho style of Turgenev. In 1903 appeared The Island Pharisees, a novel which, whatever its defects, was an incisive criticism of British upper-middle class ways of life. This was followed by The Man of Property, 1906, which took him two and a half years to write and " was conceived in satiric, mood, at the time of my life most poignant." With The Man of Property Galsworthy now reaped the harvest of success so long maturing. He had been through the fire and his. picture of the Forsyte clan, founded solidly on property, has a breadth and 'depth of vision and a sureness of stroke that holds its own with the best of Continental fiction. • Then followed The Country House (1908) and Fraternity (1910) and he was confirmed as a " representative " writer.

But we need not follow further the primrose path. Gals- worthy's literary fecundity was amazing. He wrote far too much, running to twenty-six volumes, but so did D. II. Lawrence with his thirty-seven and one enormous " lection of articles " yet to come. It is a virulent disease, writing too much, which attacks nearly all eminent writers. Scott, Byron, Dickens, Thackeray, Trollope, each in turn succumbed to it.

. But, turning to the theatre, we cannot say that. Galsworthy was ." representative" of. that sanctuary .. of British. -Philis- tinism. The effect of his first play, The Silver Box, though a brilliant success, was " very serious," as E. V. Lucas wrote to him ; and Justice and Strife, perhaps the most impressive plays in the " New School of.Drama " and received with acclamation, were " plays of. ideas " to which the greater public has always remained impervious. In July, 1917, Galsworthy wrote : " It's an unspeakable' public. Eleven plays produced .and not one in London) has made a penny . for the management that produced it." On his three com- mercial successes later—The Skin Game, Loyalties' and Escape— his biographer comments : " It is possible for plays of ' ideas ' to succeed with that public but only if the sugar of dramatic incident sufficiently thickly encases the ideological pill."

But to turn to Galsworthy the man, we may note that he gaVe away every year half of his income to brother authors in distress, and that during the 'War he worked incessantly to supply with funds hospitals and associations such as the Red Cross. Of his last illness and death there is a most touching, indeed beautiful account contributed by his nephew, Rudolf. Sauter. And so comes the end. It was natural that Galsworthy's reputation after the War should have ' been doubled by his " come back " with the extended series of the Forsyto Saga, for the great Publio loves to follow the line of least resistance 'and replicas save one the trouble of thinking. The Order of Merit bestowed by the King was the sign and symbol that John Galsworthy had become a nationai. institution. And what can be more "representative " than a national institution ? The Nobel Prize, following, testifiad to Continental admiration of the British character and of its customary habit of coming out on top. I have, written elsewhere that he was gentle in his deep instinct to defend the weak, and strong in his satiric, understanding and human generosity.