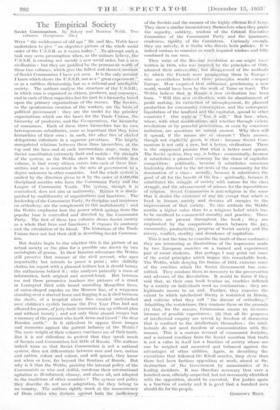 Soviet Communism. By Sidney and Beatrice Webb. Two voluines. (Longman. 35s.) WITII " the recklessness of old age " Mr. and Mrs. Webb have undertaken to give " an objective picture of the whole social order of the U.S.S.R. as it exists today."... To.attempt such a, task may seem presumption when, as the authors blieve,: _the U.S.S.R. is creating not merely a new social order, but a new,: civilisation : but they arc justified by the permanent worth of these two volumes, which give the fullest and clearest ,accoirit of Soviet Communism I have yet seen. It is the only account.. I know which shows the U.S.S-.R. not as a " great experimerit;"„, or as a ruthless dictatorship, but as a rational and "iiitelligiible society. The authors analyse the structure of thU in which man is organised as citizen, producer, and ,eonsumer, and in each of these capacities has his part in a hierarchy baZed upon the primary organisations of the masses. The Soviets, as the spontaneous creation of the workers, are the basis:of political government : they are the model for the. prirrnitY organisations which are the bases for the Trade cniOns;.the hierarchy of producers, and the Co-operatives, the; tierarchy of consumers. Each of these three hierarchies has i4 own heterogeneous subsidiaries, some so important that :they fOrin: hierarchies of their own : in each, tier after tier;of elected" delegations culminate in a supreme presidium. The laigely unregulated relations between these three hierarchies, atT the top and the base and at each intermediate stage,-, make the Soviet constitution extremely fluid and mobile : the strength of the system, as the Webbs show in their admnable'first" volume, is that every citizen enters into each of these lifer- i archies and so is associated in the acts of government' td; a degree unknown in other countries. And the whole systetri is unified by the direction given to it by the order of 8,000,090 disciplined ascetics who form the Communist Party and the League of Communist Youth. The systenn,•,thoUgh it is centralised, does not aim at 'uniformity. • RIther it. is distin- fsuished by multiformity of organisationsand functions; The ' leadership of the Communist Party, its discipline and insistence on orthodoxy, are the complement to this rnultifoirinity : and the Webbs emphasise how the power which springs from the popular base is controlled and directed by, the Communist Party. The first of these tyro volumes shows Soviet 'society as a whole that lives and functions ; it exposes its anatomy and the circulation of its blood. The historians of the Trade Unions have not lost their skill in describing Soviet Commun- ism.

But doubts begin to rise whether this is the picture of an actual society or the plan for a possible one drawn by two sociologists of genius. In their Russian adventure the Webbs still preserve that manner of the civil servant, who apes impartiality but intends to prove a point ; who skilfully clothes his report with a pleasant tedium lest it should betray the enthusiasm behind it ; who analyses patiently a mass of information, both original and second-hand. But between Inc and these persuasive teachers rise pictures of a street in Leningrad filled with broad unsmiling Mongolian faces, of onion-shaped cupolas on the Moscow line, of a waggoner standing over a starved horse and flogging it as it died between the shafts, of a hospital where flies crawled undisturbed over children's eyelids because the Five Year Plan had not allowed for gauze, of jerry-built tenements run up without plan and without beauty ; and not only these absurd images but a memory of the peasant who knelt down and kissed " the dear Russian earth." Is it ridiculous to oppose these images and memories against the patient industry of the Webbs ? The mere weight of their volumes convinces me of their truth: But it is not ridiculous to protest that they speak much of Soviets and Communism but little of Russia. The authors indeed warn us that Soviet Communism is not a national system, does not differentiate between 'race und race, nation and nation, colour and colour, and will spread, they know not when or how, far beyond the frontiers of Russia. But why is it that the Webbs, praising the internal policy of the Communists as wise and skilful, condemn their• international' agitation as ill-informed, clumsy, and above all, not adapted to the traditions of other countries ? The system and policy they describe do not need adaptation, for they belong to no country. The authors rightly mock at the inconsistency of those critics who declaim against both the inefficiency of the Soviets and the menace of the highly efficient Red Army. They show a similar inconsistency themselves when they praise the sagacity, subtlety, wisdom of the Central Executive COnanittee of the Communist Party and the ignorance, crudeness, rigidity of the Comintern. Curiously enough, they say naively, it is Stalin who directs both pal-ides. It is indeed curious to conceive so mtic,h imputed wisdom and folly combined in one man.

They write of the R11;3141:1 revolution as one might have, written in 1800, who was; iiispirectby the principles of 1789, admired their universality-, but Os-approved of the methods by which the Freneh were propkating them in Europe • who nevertheless believed th.4)6 principles would conquer Europe. How surprised illat enildisiast, proclaiming a new world, would have been by i he work of 'Paine or Sorel. The Webbs believe that, Russia. a' new civilisation has been ne born. " Will this W civilisation; with its abandonment of profit making,' its extinct loll of unemployment, its planned production for community consumption, and the consequent liquidation of the landlord mid, t he:capitalist, spread to other countries ?„ Our reply,* " Yes, it will." But how, When, where, with what ModifleatimH. and whether through violent revolutioni or by peace011 penetration, or even by conscious imitation, are questions we csonot answer. Why then will it spread, if the means arc ,so obscure ? Their answer, though not explicitly given, is clear : because Soviet Com- munism. is not only a' new, but a better, civilisation. There is the suppressed piernise that What is better must spread. The Soviet system, they say, is better: economically, because it substitutes a planned economy' for the chaos of capitalist competition : politically, because it substitutes conscious leadership directed to the interests of the community for the domination of a class : morally, because it substitutes the good of all for the, benefit of the few spiritually, because it substitiitei the Stfuggle of society with nature for the class struggle, and the advancement of science for the sliperstitions orreligion. Soviet Communism is anti-religious in the sense that it, denies -the ciisteoiec'of any life except that which is lived in laimao society and devotes all energies to the irnprovement of that society. To this attitude the Webbs ascribe a higher value than to a religious belief which has to be sacrificed to commercial morality and practice. These contrasts are present throughout the book ; they are emphasised by the comparisons drawn between the joy, community, productivity, progress of Soviet society and the misery, conflict, sterility and decadence of capitalism.

This is not the time to examine the truth of these contrasts : they are interesting as illustrations of the impression made by two European societies on a trained and experienced pair of social students, But perhaps I may point out some of the social principles which inspire this remarkable book. The Webbs, while denying the famine of 1934, examine some of the cruelties which the Soviet Government has com- mitted. mitted. They condone them as necessary to the preservation and advance of the Revolution. It would be fairer if they said that, as their own book teaches us, cruelties inflicted by a society on individuals need no condonation : they are legitimate means to an end. Further, they examine the extent to which intellectual liberty is restricted in RiisSia, and criticise what they call " the disease of orthOdhxy." Admitting the restrictions, they condone them on the grounds (1) that, for the masses, Communism means an immense increase of possible experiences ; (2) that all the purposes of intellectual enquiry are served by freedom of discussion that is confined to the intellectuals themselves : the intel- lectuals do not need freedom of communication with the masses. This is a curious reversal of communist doctrine, and a natural corollary from the Soviet assertion that truth is, not a value in itself but a function of society whose use can be weighed and measured and balanced against the advantages of other - utilities. Again, in describing the executions that followed the. Kiroff murder, they show that there had been factious opposition at work, aimed at the destruction of the Government by assassination of its leading Menthers. It was therefore necessary that over a hundred men, officially suspected, but not necessarily identified with the opposition, should be executed. For justice again is a function of society and it is good. that a hundred men. should die for the people.