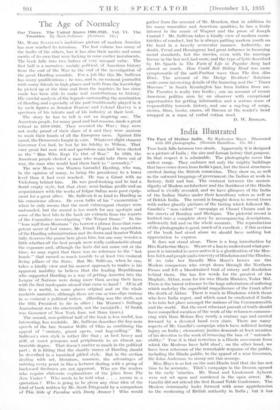 The Age of Normalcy

Mn. MARK SULLIVAN'S ambitious picture of modern Anierica has now reached its terminus. The last volume has many of the faults of the others, but it has also their merits and some merits of its own that were lacking in some earlier instalments. The book falls into two halves of very unequal value. The first half is a narrative, mainly political, of American history from the end of the War to 'the end of the investigation of the great Harding scandals. For a job like this Mr. Sullivan has many qualifications ; he was, and is, an eminent journalist with u►any friends in high places and both from the knowledge he picked up at the time and from the inquiries he has since made has been able to make real contributions to history. His careful analysis of the legends surrounding the nomination of Harding and especially of the part traditionally played in it by such figures as Senator Penrose and Colonel Harvey is a specimen of his talents and of his industry at their best.

The story he has to tell is not an inspiring one. The American people, for many good and bad reasons, made a great refusal in 1919-1920. They resented the War ; they were not really proud of their share of it and they were anxious to wash their hands of all the European mess. 'Against this mood, the Democrats fought in vain. Whatever slight chances Governor Cox had, he lost by his fidelity to Wilson. That once great but now sick and querulous man had been elected as the " Man Who Kept Us Out of War." In 1920, the American people elected a man who would take them out of war, the man who would lead them back to " normalcy."

The new Moses was Warren Gamaliel Harding, who was, in the opinion of many, to bring the presidency to a lower level than it had ever reached. He was a Grant with no Vicksburg behind him. He was good-looking and he had a florid empty style, but that clear, semi-Indian profile and an acquaintance with the works of Edgar Saltus were poor equip- ment for a great oflice. Mr. Sullivan is as kind to Harding as his conscience allows. He even talks of his " exoneration " when he only means that the most extravagant charges were unfounded, but the record is too much for any apologia and some of the best bits in the book are extracts from the reports of the Committee investigating " the Teapot Dome." In the " lone wolf from Montana " (to borrow a phrase from that com- petent saver of lost causes, Mr. Frank Hogan) the reputation of the Harding administration met its doom and Senator Walsh fully deserves the praise here given him, but one may wonder a little whether all the best people were really enthusiastic about the exposure and, although the facts did not come out at the time, we may regret that there was no reference to the " hot bonds " that caused so much trouble to at least two eminent living pillars of the State. But Mr. Sullivan, when he can, takes a kindly view and his nearest approach to malice is his apparent inability to believe that the leading Republicans who supported Harding as a way of getting America into the League Of Nations were doing more than saving their faces with the first inadequate utensil that came to hand I All in all this is a useful, in some places original and on the whole readable narrative, although there are one or two slips curious in so eminent a political writer. (Harding was the sixth, not the fifth President to die in office ; the Women's Suffrage Amendment was the nineteenth, not the twentieth ; Al Smith was Governor of New York four, not three times.) The second, non-political half of the book is less useful, less interesting, less readable. Mr. Sullivan describes the key-note speech of the late Senator Willis of Ohio as combining the appeal of " oratory, grand opera, and hog-calling." Mr. Sullivan's own style is rather like that ; at best heavy and stiff, at worst pompous and periphrastic to an almost ,un- bearable degree. That doesn't matter so much in the political part ; it is fitting that the shoddy career of Harding should be described in a tarnished gilded style. But in the section dealing with art, literature, manners, the advantages of rubbing every point in like a lecturer dealing with a group of backward freshmen are not apparent. Who arc the readers who require elaborate explanations of the jOkes front The New Yorker ? Who needs to be told what . . . means in a quotation ? Who is going to be given any clear idea of the kind of book written by Mr. Scott Fitzgerald by a comparison of This 'Side of Paradise with Dusty Answer ? Who would gather from the account of Mr. Meneken, that in addition to his many masculine and American qualities, he has a lively interest in the music of Wagner and the prose of Joseph Conrad ? Mr.-Sullivan takes a kindly view of modern eccen- tricities of conduct, but he is always patting modern youth on the head in a heavily avuncular manner. Indirectly, no doubt, Freud and Hemingway had great influence in loosening moral standards, but the movies, even with the marriage license in the last reel, had more, and the type of lyric described by Dr. Spaeth in The Facts of Life in Popular Song had almost as much. How Could Reid Riding Hood was more symptomatic of the anti-Puritan wave than The Sun Also Rises. The account of the Dodge Brothers' flotation omits some interesting details of the financing and the " Times Museum " in South Kensington has been hidden from me. The Twenties is really two books ; one an account of recent American politics seen by an observer with exceptional opportunities for getting information and a serious sense of responsibility towards history, and one a mg-bag of songs, stories, films, books, crazes, all thrown at the reader's head wrapped in a mass of verbal cotton wool.