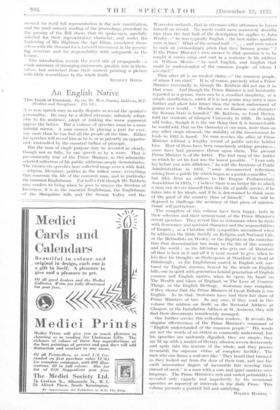 A 1.1-ame speech may as easily disguise as reveal the speaker's personality. He may be a skilled advocate, infinitely adapt- able to his audience; adept at making the worse argument appear the better. But a volume of speeches must be a more faithful mirror. A man cannot be playing a part for ever, any more than he can fool all the people all the time. Either his speeches will reveal him as he is, or as patently an opportu- nist, unsteadied by the essential ballast of principle.

But the man of single purpose may be revealed as clearly, t hough not as fully, by one speech as by a score. That is pre-eminently true 'of the Prime Minister, as this admirably selected collection of his public addresses amply demonstrates. The twenty-six speeches here collected range over a wide field, ---religion, literature, politics in the widest sense, everything that concerns the life of the common man, and in particular the common Englishman. For half a Celt though Mr. Baldwin may confess to being when he goes to receive the freedom of Inverness, it is as the essential Englishman, the Englishman of the Shropshire hills and the Severn Valley and the

Worcester orchards, t hat in utterance after utterance' he leaves himself on record. No words could more accurately describe him than the first half of the description he, applies to John Wesley—" he was typically English : • the best native qualitiei were in him." Mal of the second half—" „and were raised to such an extraordinary pitch that they became genius " If the Prime Minister's own answer to that question is to be sought it conies crisp and curt in a sentence in his address on William Morris—" he used English, and English that could be 'understanded of the common people—of whom I am chief."

That after all is no modest claim,—" the common people,

of whom I am chief." It is, of course, precisely what a Prime Minister necessarily is, though Mr. Baldwin did not use it in that sense. And though the Prime Minister is not habitually regarded as a genius, there can be a steadfast simplicity, or a simple steadfastness, which if it is not genius may carry a man further and plant him firmer than the richest endowment' of genius ever would. " Moribus slat ret Romana--on character the Roman State is founded," Mr. Baldwin, as Lord Rector, told the students of Glasgow University in 1930. He might add today, though it is the one thing that it is inconceivable he would add, that on the character of one man, more than on any other single element, the stability of the Government he leads in 1935 is based. No man reaches the office of Prime Minister without a lengthy record of public service behind him. Most of them have been consciously seeking greatness ;, some have had greatness thrust upon them. The present Prime Minister is of the latter. The first rung of the ladder on which he set his foot was the lowest possible. " I can only lay before you with diffidence," he told the Institute of Public Administration in 1932, " some disconnected reflections arisingirom a public life which began as a parish councillor "- but (this from an address to the Empire Parliamentary Association in 1935), " I believe there is no better life to which a man can devote himself than this life of public service, if he takes into it his ideals, and if he is determined to think more of the good of the country than of himself." Few will be disposed to challenge the accuracy of that piece of uninten- tional self-portraiture.

The compilers of this volume have been happy, both in

their selection and their arrangement of the Prime MiniSter's recent speeches. They reveal him as statesman when he deals with democracy and national character and the responsibilities of Empire ; as a Christian with sympathies unconfined when he addresses the Bible Society on Religion and National Life, or the Methodists on Wesley, or the Baptists on the contribu- tion that denomination has made to the life of this country and the world ; as the litterateur who gets out of literature all that is best in it and all it is most meant to give, when he lets flow his thoughts on Shakespeare at Stratford or Scott at Edinburgh ; as the Englishman rooted in English soil, nur- tured by English streams, braced by the winds on English hills, one in spirit with generation behind generation of English yeomen and English squires, when he opens his heart. on The Wealth and Glory of England, or The Love of Country Things, or the English Heritage. SCotsmen may complain if they .choose that the Prime Minister of Great Britain is too English. As to that, Scotsmen have had their fair share of Prime Ministers of late. In any case, if they read in this volume the address •on Scott, or the Rectorial Address at Glasgow, or the Installation Address at St. Andrews, they will find their discontents considerably assuaged.

One further service this collection renders. It reveals the singular effectiveness of the Prime Minister's command of " English understanded of the common people." His words arc not the words of an orator as commonly understood. but his speeches are uniformly dignified, they are simple, they are lit up with a wealth of literary allusion woven dexterously and aptly into the texture of the whole, and they possess invariably the supreme virtue of complete lucidity. The men who can frame a senteneelike " They heard that trumpet as they looked out from the door of their tent, and saw the swift remorseless fingers of• inexorable fate weaving their shroud of snow," is a man with a sure and quiet mastery over language. The Prime Minister's rich and varied personality is revealed only vaguely and imperfectly by his occasional speeches as -reported at intervals in-the daily Press.- This volume presents a portrait full and satisfying.