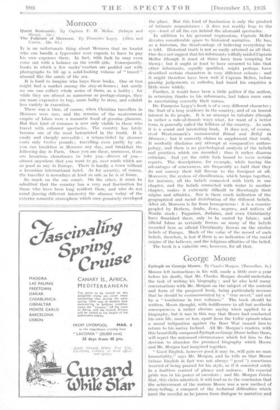 Quest Romantic. By Captain P. 1-1. Mellor. (Selwyn and Blount. lbs.) • The Folklore of lVfOrocco. 'By Pitineeise" Legby. (Allen and Unwin. Us. 6d,) IT is an unfortunate thing about Morocco that no tourist who can handle a typewriter ever expects to have to pay his own expenses there. In fact, with luck he may even come out with a balance on the credit side. Consequently, books in which a few weeks' tourism are padded out with photographs to fill up a solid-looking volume of travel abound like the sands of the sea.

It is hard to imagine who buys these books. One or two

might find a market among the ,stay-at-homes ; but surely

no one can collect whole series of them, as a hobby ; for while they are almost as numerous as postage-stamps, they are more expensive to buy, more bulky to store, and exhibit less• variety in execution.

There was a time, of course, when Christian travellers in Morocco were rare, and the remains of the westernmost empire of Islam were a romantic fossil of genuine glamour, But that kind of romance is now only visible to those who travel with coloured spectacles. The country has lately become one of the most betouristed in the world. It is easily and cheaply accessible ; a return-ticket by steamer costs only twelve pounds ; travelling even partly by air, you can breakfast in Morocco any day, and breakfast the following day in Paris. Once you, are there, moreover, there are luxurious eharabancs to take you—droves of you— almost anywhere that you want to go, over roads which are as good as any in Europe. There is hardly a town without a luxuridus international hotel. As for security,. of course, the traveller is nowadays at least as safe as he is at home. So much on the one count. On the other, it must• be admitted that the country has a very, real fascination for those who have been long resident there, and who do not mind (having different interests) the absence today of the exterior romantic atmosphere which once genuinely enveloped the place. But this kind, of fascination is only the product of intimate acquaintance : it does not readily leap to the eyeleast of all the eye behind the aforesaid spectacles.

In addition to his personal impressions, Captain Mellor deVotes considerable space to bistOridal 'narrative. He has, as a historian, the disadvantage of believing everything he is told. Historical truth is not so easily attained as all that. One does not suggest that his informants Wilfully misled Captain Mellor (though it must at tines have been "tempting for them) ; but it ought at least to have occurred to him that other informants, equally qualified, might perhaps have described certain characters in very different colours : and it,.might therefore have been well if Captain Mellor, before passiitg judgements ex cathedra, had based his enquiries a little more widely.

Further, it would have been a little politer if the author, hi returning thanks to his informants, had taken more care in ascertaining correctly their names.

Dr: Frangoise Legey's book is of a very different character ; the fruit of a long residence in the country, and of an honest interest in its people. It is an attempt to tabulate (though in rather ,a rule-of-thumb way) what, for want of a better term, is generally called the folklore of the country. As such it is a sound and interesting book. It does not, of course, rival Westermarek's monumental Ritual and Belief in Morocco ; but it correctly claims to supplement that work. It modestly disclaims any attempt at comparative anthro- pology, and there is no psychological analysis of the beliefs and praet ices which are recorded : thus it rather disarms criticism. And yet the critic feels bound to voice certain regrets. The descriptions, for example, while having the advantages of conciseness, are • freqaently s9 bald that they do not convey their full flavour to the foreigner at all. Moreover, the system of classification, which lumps together, for instance, all the beliefs connect( d with birth in one chapter, and the beliefs connected with water in another chapter, makes it extremely difficult to disentangle their origins and affinities. Nor is there much indication of the geographical and racial distributioa of the different beliefs. After all, Morocco is far from homogeneous : it is a country peopled by Berbers, Arabs, Jews, negroes, and natives of Nordic stock : Paganism, Judaism, and even Christianity have flourished there, only to be ousted by Islam ; and: official Islam as certainly frowns on many of the belie& recorded here as official . Christianity frowns on the sinsilat beliefs of Europe. Much of the value of the record of such beliefs, therefore, is lost if there is no indication of the racial origins df the believer, and the religious affinities of the belief.

The book is a valuable one, however, for all that.