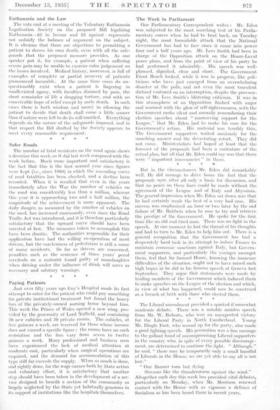 The Liberal amendment. provided a spirited if somewhat academic debate.

There was a notable maiden speech from Mr. W. Roberts, who won an unexpected victory for the Liberal Party in North Cumberland, Young Mr. Dingle Foot, who wound pp, for the party, also made a good fighting speech. His peroration was a fine message to the gallant band of uncompromising Liberal. supporters in, the country who, in spite of every possible discourage- ment, are determined to continue the. fight. " Although," he said, " there may be temporarily only a small handful of Liberals in the House, we are yet able to say all is 'not lost."

" Our Banner torn but flying Streams -like the thunderstorm against the wind." Altogether each day this week has provided vital debates, particularly on Monday, when Mr: Morrison renewed contact with the House with as vigorous a defence • of Socialism as has been heard there in recent years.