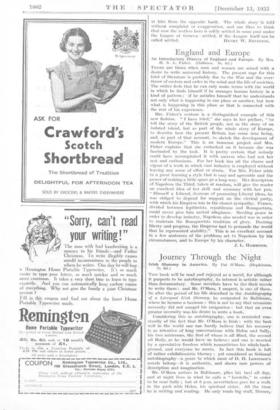 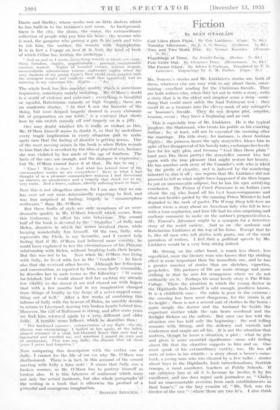 Journey Through the Night

This book will be read and enjoyed as a novel, for although it purports to be autobiography, its interest is artistic rather than documentary. Some novelists have to live their novels to write them : and Mr. O'Mara, *I suspect, is one of these. So after the period of his life described in the Autobiography of a Liverpool 1iish Slummy, he emigrated to Baltiniore, where he became a taximan : this is not to say that economic necessity did not compel his emigration : but that an even greater necessity was his desire to write a book.

Considering this as autobiography, one is reminded con-. stantly of the fact that -Mr. O'Mara is Irish : with the best will in the world one can hardly believe that his memory is as retentive of long conversations with Helen and Sally, his two mistresses, the first of whom is all Mind, the second , all Body, as he would have us believe : and one is worried by a speculative freedom which romanticises his whole back- . ground, and everyone he meets. In fact this book is full of rather exhibitionistic blarney : yet considered as fictional autobiography—a genre to which most of D. H. Lawrence's novels belong—it is authentic, and shows rare powers of description and imagination.

Mr. O'Mara arrives in Baltimore, plies his taxi all day, and at night lives in what he calls a " bordello," in order to be near Sally ; but at 0 p.m. nevertheless goes for a walk in the park with Helen, his spiritual sister. All the time he is writing and reading. He only reads big stuff, Homer,-

Dante and Shelley, whose works rest on little shelves which he has built-in to the taxinien's rest room. As background, there is the city, the slunis, the water, the extraordinary collection of people who pay hnn.hrs fnres':• the woman who is mad, the gangster who pressei1 a gun tit his neek and tries

of which Celine has „written the archetype :

" Arid on and on I wrote, everything, :II try, in i Ir vied, y01 thing formless, chaotic, -untaiblishabh, Ea-et-IOUs . emotion wasted. Niglitrlif–freniled -cstas,\.. intense di.spair, incontrollable subconscious -terrors—night inim, nights Whf'11. t he' very shadows of my grCissi Craw's, Nest w:taddsegin_)),,opled wit h the strangest images and coliflietS—stUff that apparently had ire meaning in my conscious life. • Nights .• ."- The.whole book has this Macabre quality which is sometimes impressive, sometimes merely irritating. Mr. O'Mara's World is ri world of violence and extremes ; everything is beautiful or squalid, Babelafaian;comedy, or high tragedy : there are

no moderate shades. At first saw the humour the thing, but soon dt:e.Pest tragedy, shoWed in 'every elaborate bit of preparation on our table," is a sentence that shoWs how he can switch comedy off and tragedy on in a jiffy.'

One may ,doubt whether life is' really, as violent as this..

Mr. O'Mara himself seems, to '.doubt it, so that he underlines, every tragie'dmplication in every ,situation just to make quite sure that the feeling•of disaster is getting across. ,One. of the most moving scenes in book is when Helen reveals

to Mtn that.she is revolted by the idea:of physical sex, because she was violated by her uncle at the age of foUrteen. The facts of the ease are enough, and the, dialogue is express'ive : but Mr. O'Mara cannot leave it at that.•. He has to say :

"Time Y What. is time ? . And what lies behind seine of the commonplace masks wo see everywhere ? Here in what I.' had thoUght of as a pleasaUt -commonplace waitress I had disemp-ed an essence, an omniscience and a. tragedy that shook me to my very roots. And a brave, valiant, silently suffering heart to boot."

Now this is not altogether sincere, for I am sure that no one has ever set out more determinedly expecting to find, and was less surprised at finding, tragedy in " Commonplace

But these faults of style are only symptoms of an over- dramatic quality in Mr.. O'Mara himself• which seems, from this testimony; to tll'ect, his Mirn behavioitr. „The second half of the book is devoted to the tragedies " of Sally and Helen,_ disasters in which the writer inVolVed them, while keeping wonderfully free himself. Of the two, Sally, who represents the Flesh, is my favourite, and I cannot help feeling; that if Mr. O'Mara had behaved' more sensibly; he could have explained to her the circumstances of his Platonic relationship with Helen, without' breaking.beth ,their hearts.

But this was not to be. Now when Mr. O'Mara was living with Sally, he lived with her in the ". bordello ",: he knew also that sire received other lovers. Although her behaviour and conversation, as reported by him,.seem fairly reasonable, ' he describes her in such terms as the following : "It' seems far-fetched, but I could almost feel her sucking my already

low vitality as she stared at inc and clawed me with fingers that with a few months had in my imagination 'changed from things of bereity to the fangs of a nerve-sapped some- thing out of hell.'.' After 'a few weeks. of combining this inferno of Sally .with the heaven of,Helen, he sensibly decides to return to Liverpool, leaving two broken hearts behind him. However, the call of Baltimore is strong, and after some years we find hirn rattrnal again .to a -very, different and older Dally. A terrible' scene followS, which he describes thus: " liar liardeicil manner ; interpretation of my flight—the ;dis- illusion was excruciating.: 1 looked at her .again„ at tho faded, abused remnard of a vital, full-blooMed flower that once had so fascinated and terrified roe, and soMehow I reap ed an eerie ;sett of satisfaction, . This vats. mu,. Sally; 'the illusion that all these years I nei•er had forgotten Y " Now comparing this description with the earlier one of Sally, I cannot for the life of me see why Mr. O'Mara was disillusioned. There is in fact, in this account of the second meeting with Sally a false note: ' it seems that Sally was e broken woman, so Mr. O'Mara has to portray himself as broken also. It is this falseness of sentiment which roars not only the' actual incident's, birt also 'Whole Iparagraphs'icif the writing in a book that is otherwise the product of a